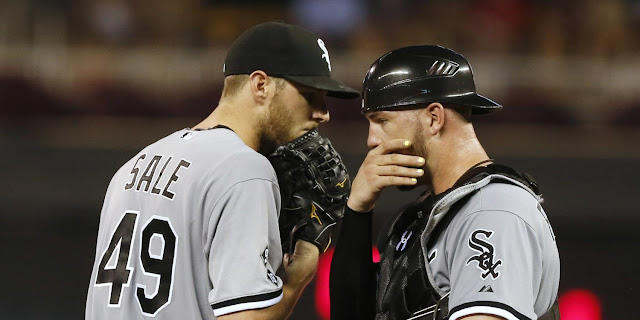 So I have a lot of ideas for what I'd like to see the White Sox do this winter, as well as ideas for what I think they're going to do. Instead of writing one giant piece, I figured it'd all be a lot easier for everyone to digest -- as well as easier to write -- if I broke the plan down in segments by positions.

I'll look at catching, the infield, the outfield, the starting rotation and the bullpen.

I'll go over the in-house options, as well as possible free agent signings or trade targets. Throughout this process I'll not only be explaining what I'd like to see happen, but I'll try and limit myself to realistic options.

We'll start this project behind the plate, which is a position that's been a problem since A.J. Pierzynski left town, but really might not be as big a black hole as many Sox fans believe.

The first question surrounding the catching position is the easiest to answer. You tender Tyler Flowers. He'll probably cost you about $3.5 million next season. Fine. Pay it. Flowers isn't a hitter, and he's never going to be a reliable bat. Once in a while he'll run into a pitch and hit it 800 feet into the air -- and about 400 feet horizontally -- but that's the real extent of his offensive contributions.

But as an actual catcher, he brings so much more.

First of all, Chris Sale loves pitching to him, as do many White Sox starters. Considering how important Sale is to the franchise, you want to keep him happy, and you let him have Tyler Flowers.

That has real, tangible value.

Soto will be a free agent this winter, and the question is whether or not the Sox want to bring him back to serve the same kind of role. I'm inclined to say that they should. It's possible that Soto will receive an offer from elsewhere that promises more playing time, but I doubt it.

Soto isn't the same catcher that Flowers is defensively, but he does bring some pop to the lineup when he plays. Frankly, I wanted him to get more at bats than he did last season, but even in his limited time, he still managed nine homers and eight doubles.

His home run rate was 4.3% last season. The only member of the White Sox with a better rate was Jose Abreu at 4.5%. For a team in desperate need of power, Soto can provide some cheap.

Matt Wieters: Wieters is the biggest name available of all free agent catchers, but I really don't know how much of an upgrade he'd be. He's only played in 101 games the last two seasons, but with Scott Boras as his agent, he's not going to be taking a discounted deal to prove himself worthy of bigger money.

Alex Avila: Avila is coming off a terrible season in which he hit .191 in only 67 games. Now, you could write the performance off and blame the injuries, but in 2014 he had a slash line of .218/.327/.359. Is that really any better than what you already have on the roster?

A.J. Pierzynski: You know Sox fans will want him, just like they're going to want Mark Buehrle back. I'd take him back if he wanted to come, too, but it would have to be with a clear understanding that he's the backup option and occasional pinch-hitter. Nothing else.

Jonathan Lucroy: The Brewers are in a division with the Cardinals, Pirates and Cubs. Three teams that don't seem to be going anywhere any time soon. They are also building a new front office, and a rebuild is likely in the future. Could moving Lucroy, who is a free agent after the 2017 season, help with that rebuild effort? He's coming off a down season, so he may not be as expensive as you'd think.

Andrew Susac: The Giants drafted Susac in the 2nd round of the 2011 draft. The Giants also have Buster Posey, which severely limits Susac's chance at playing time unless Posey is moved to first base a la Joe Mauer. Would the Giants be willing to move Susac? How much would it cost?

Austin Hedges: I'm skeptical the Padres would want to give him up, but the 22-year old catcher is excellent defensively. Could be a long-term answer for when Flowers becomes a free agent after next season.

Tender Flowers and re-sign Soto, as long as Soto comes at a reasonable price. The White Sox have a lot of holes that need to be filled this winter, and while you'd like to see an improvement offensively behind the plate, the dollars this team will have to spend are better off being spent elsewhere.

None of the free agent possibilities are both cost-effective and a significant improvement, so why spend the money?

Sure, if you can trade for a player like one of the catchers listed, you consider the offer. But if I'm Rick Hahn, I'd like to get Flowers and Soto back in the fold as quickly as possible so I can focus on the rest of the team.

If you improve everything else, the weakness at catcher becomes less important.
Geovany Soto Tyler Flowers