The Offseason Plan: First Base 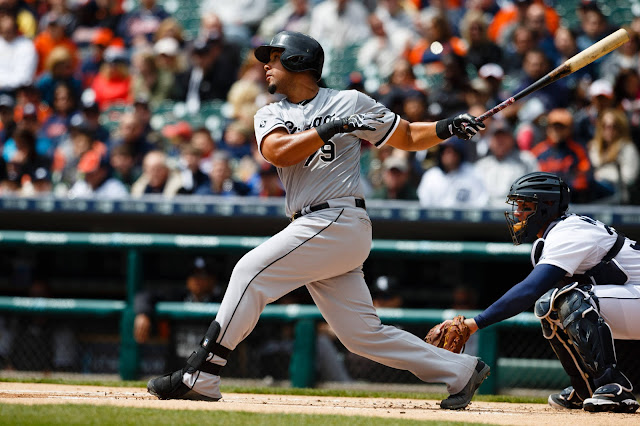 Any time you can go from Frank Thomas to Paul Konerko to now Jose Abreu, things have gone rather well. It's nice to know that there's at least one position we can count on year in and year out. But just because we have Jose Abreu doesn't mean that the position is totally settled.

So let's break down what Rick Hahn could do this winter, starting with what he already has on the roster.

Aside from Chris Sale, and maybe Jose Quintana, Jose Abreu is the most valuable asset the White Sox have. Through his first two seasons on the South Side he's hit 66 home runs with 208 RBI, while putting up a line of .303/.364/.540.

LaRoche signed a two-year, $25 million deal with the White Sox last winter, and he was going to serve as a designated hitter and occasional first baseman. He was an absolute disaster. LaRoche only hit 12 homers, and had a slash line of .207/.293/340 while striking out in 27.5% of his plate appearances. A number that was a full 5% over his career averages.

I know! Who would have thought an aging, left-handed power-hitter from the Washington Nationals might struggle with the White Sox, but it happened.

He still has a year left on his contract and will cost the White Sox $13 million if he's back. The question is do you do whatever you can to cut your losses, or just hope for a bounce-back season from a 36-year old with declining bat speed?

Chris Davis: Davis is one of the bigger names available on the first base market this winter. He's also a bit of a mystery. After hitting 53 home runs in 2013, Davis' number plummeted in 2014, but he rebounded last year with another 47 dingers and an OPS+ of 146.

But which Davis would you be signing?

If he's the dinger machine, awesome! He also gives you some positional flexibility, as he's played first base, third base and right field. He's not exactly elite at any of them, but he's passable if he's mashing the way he did last season. The question here is, how much is he going to cost?

Mike Napoli: If you keep LaRoche, Napoli could serve in a designated hitter platoon for you, and he probably won't cost much. Last season Napoli slashed .278/.391/.563 against lefties. The problem with Napoli is you'd be using up a bench spot on somebody who can't do much of anything but hit lefties and play some first base once in a while. He'd limit flexibility on the roster if LaRoche remains.

Steve Pearce: Pearce would essentially be the same thing as Mike Napoli, only not as effective with the bat, but with more positional flexibility. He can play some outfield or infield if needed in a pinch.

Matt Adams: He was limited to only 60 games in 2015 due to a quad tear, and the Cardinals found plenty of serviceable replacements to serve in his stead. He could be available via trade this winter because of it, and he's still a 26-year old bat that's shown some pop in the past. He'd also be under team control through 2019.

Kendrys Morales: He's been really good for the Royals this season, and is owed $9 million in 2016 with an $11 million option ($1.5 million buyout) in 2017. But while he's been very good for the Royals, Alex Gordon will be a free agent this winter. What if the Royals would really like to keep him around? Freeing up at least $10.5 million could help that happen, while getting some young, cost-controlled talent in return. We all know Micah Johnson would be a great Royal.

I'd be doing everything in my power to trade Adam LaRoche. I wouldn't want a lot in return as much as I'd want some salary relief. In fact, even if the White Sox have to eat most of the $13 million owed him, I'd be okay with it just to ensure that Adam LaRoche isn't getting 400 at bats with the White Sox next season.

There are better options available. Even if LaRoche does "bounce back," what exactly will he bounce back to? A 1.5 WAR player? For $13 million? No thanks.