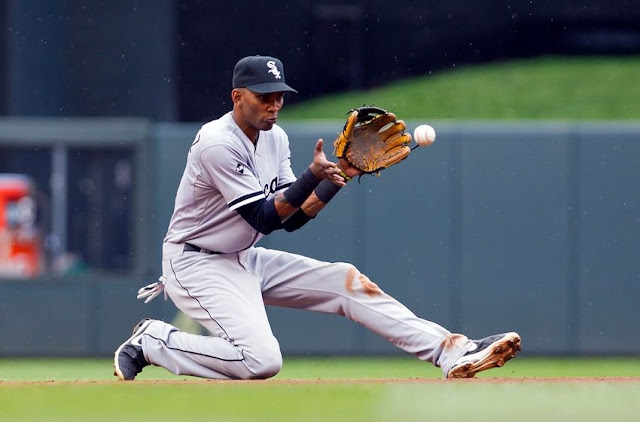 Now that it's actually the MLB offseason, I may as well write the newest installment of Write Sox's Offseason Plan.

Today we'll take a look at the middle infield.

Alexei Ramirez has been the White Sox shortstop for 1,091 of the 1,296 games the team has played since the beginning of the 2008 season, and since then he's shared the middle of the White Sox infield with many different second baseman.

As we enter 2016, however, we face the possibility of having a new White Sox shortstop, so it only makes sense we start this post by focusing on The Cuban Missile.
ALEXEI RAMIREZ

We'll find out Alexei's fate soon enough. The White Sox will either pick up his $10 million option for 2016, or they'll buy him out for $1 million. They could also decline the option and work out a new multi-year deal with Ramirez if they want.

I happen to think it's the most likely outcome. Alexei turned 34 in September. He's spent his entire life in the United States in Chicago. When you think of what he went through to get here from Cuba, and then to bring his family here, I have a hard time imagining Alexei will want to leave Chicago at this point. So I think he'll actually take a pay cut to make sure he stays here.

And I think it's the best option for the White Sox.

Tim Anderson isn't going to be ready in 2016, so you need somebody to play short until he is. Do you want that person to be Tyler Saladino? I don't. And as you'll see later in this post, there are plenty of options available via free agency or trade, but none of them are all that appealing.

The White Sox also have a decision to make with Gordon Beckham, and it's an extremely easy one. Beckham's a free agent. It's time to say goodbye again, and hopefully for good this time.

I'm sorry it didn't work out the way I thought it might when Bacon made his debut in 2009 as an opposite field, line-drive hitting machine, but it's over. Let's all just move on.

I know that, realistically, you'd like the White Sox to have somebody else be your starting second baseman in 2016. Logic tells me this. But fuck logic. I love Carlos Sanchez. I will probably be more upset if he's not at second base next year than I will be if he is.

Micah might-a pan out to be a useful bat in the Majors, I don't know. What I am pretty confident about, however, is that he's not going to be a second baseman. At least, not one who hits well enough to be a black hole defensively at second base every day.

He just reminds me of a lot of White Sox players that have come and gone through the years. A lot of talent and potential, but that's probably all it'll ever be. I think the ideal plan for Micah this winter is to use him in a trade to help address other areas.

I already went over my thoughts on Saladino while going over third base. I'm fine if he's on the roster next season, as his glove plays well at multiple positions. It's just I don't want him on the team as anything other than a utility guy off the bench.

I'm sure the Charlotte Knights love having him.

Ben Zobrist: Zobrist is a very interesting name because, theoretically, he can be used to fill a lot of holes. Between Oakland and Kansas City, Zobrist spent time at second base, third base, left field and right field in 2015. During his long career, he's played every position on the diamond except catcher.

But that's just it. It's been a long career. Zobrist will be 35 in May. His versatility will make him attractive to a lot of teams. That means he's not going to be signing any one-year deals. So you have to ask yourself if you want to invest in a player that's going to be closer to 40 than 30 next summer over multiple years.

Daniel Murphy: I've gone over my thoughts on this as well. Those thoughts being well known, Murphy is still a possibility for the White Sox. He plays both second and third base -- though neither very well! -- but what makes him attractive is he has a plus bat for a middle infielder. So he's going to be attractive to somebody. Maybe even the White Sox.

Howie Kendrick: Kendrick's always been a little underrated in my eyes. There's nothing spectacular about him, but as far as I can tell, there's nothing really wrong with him, either. Not a lot of pop in the bat, but he always has a respectable OBP (.340 the last three years) and he's capable of stealing a base from time to time. Wouldn't be a splashy signing, but would be a definite improvement.

Brandon Phillips: The Reds are definitely trying to rebuild, so Brandon Phillips can likely be had this winter, and probably wouldn't cost much. The question is do you want to trade for a guy who will turn 35 in June, is still owed $27 million over two years, and just had his best season in five years, but only managed an OPS+ of 97 while doing so?

Neil Walker: The Pirates are going to want to shed some salary this winter to improve other areas, and with Walker entering arbitration, I think he's going to be available. Not much of a glove, but a definite upgrade offensively than what you have. He's basically Daniel Murphy, but instead of a long-term financial commitment, you just have to give up some mid-level prospects.

Starlin Castro/Javy Baez: I also went over this in the third base preview. I really don't think both of these two are back with the Cubs next season. Either can be used at second or third, depending on what you want to do, and both could be significant upgrades than what you already have.

I'd be totally fine rolling with Alexei and Carlos Sanchez up the middle, while making a major upgrade at third base instead, and I think the White Sox feel the same.

My official prediction is that Alexei signs a new, team-friendly extension, Carlos Sanchez is your second baseman, Tyler Saladino spends time backing up both spots, and Micah Johnson is shipped off via trade to improve either third base, the rotation or the outfield.

But if that's not what happens, I really hope the White Sox go the trade route rather than free agency. There's just nothing there that I think is worth it other than maybe Kendrick. But he'd replace the love of my life, Carlos Sanchez, and I just can't have that.