Thoughts On The White Sox And Alex Gordon 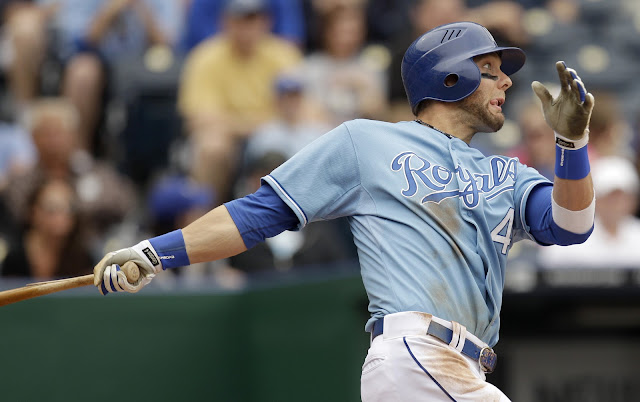 As we all know, there's been a pattern to the White Sox offseason so far. From Thursday to Tuesday, nothing happens. You sit around and check Twitter and MLB Trade Rumors, or various message boards, looking for a rumor to surface, but nothing happens.

Then Wednesday comes, and the White Sox make a move. They trade for Brett Lawrie. Then they trade for Todd Frazier. After that, Thursday comes and the cycle starts over again.

Could this Wednesday be similar? Well, Ken Rosenthal did drop this little nugget of information on Tuesday that sent us all into a tizzy.

Now, I've spent plenty of time here wondering about Justin Upton and Yoenis Cespedes for the White Sox, and kind of ignoring Alex Gordon, even if he's something of a perfect fit for the White Sox. I have reasons for that, which I'll get to in a bit, but before I do, I want to say why I think Gordon makes a lot of sense as a White Sox target.

First of all, he's a clear-cut upgrade over either Melky Cabrera or Avisail Garcia, both as a hitter and as a defender. He's won four Gold Gloves, and there's a chance he'll win a fifth this season, though missing so much time due to a groin injury could cost him the award. Also, he gets on base frequently.

Gordon posted an OBP of .377 last year, and has an OBP of .348 in his career. The White Sox could certainly use a player that not only hits, and gets on base, but happens to hit lefty and plays excellent defense.

There's also the factor of weakening a division rival while strengthening your own team, as the White Sox signing Gordon would mean he's no longer a Royal. Plus, you know he's familiar with the division, so we wouldn't have to worry about Adam Dunn or Adam LaRoche style "adjustments" to the American League.

Again, if the White Sox sign Alex Gordon, he's a major upgrade over what they currently have.

There are things about Gordon that concern me. First of all, he'll be turning 32 in February, so if you sign Gordon to a four or five-year deal, you're paying him until he's 36 or 37.

It's not just bats that tend to diminish as players get older, but their legs as well, and when your legs go, you're no longer the same defensive force you used to be. It's just impossible to cover the same amount of ground.

Also, I mentioned Gordon's groin injury last season. That's not a freak injury, it's muscular. The kind that you're far more likely to suffer once you enter your 30s than you were in your 20s.

Trust me, I know. I'm 35, and after an hour of pilates I feel like I just need to go lie down and die somewhere for a while. Not that I'm in the same physical shape that Gordon is, but the point remains, the older you get, the more your body will betray you.

So when I look at the outfield possibilities, that's why I just don't find Gordon as enticing as Upton or Cespedes, or even a Dexter Fowler type.

Now, assuming Gordon is fully healthy in 2016, he'd probably be just as valuable, and maybe even more valuable than any of the other options. But I'm concerned about 2017, 2018, and 2019 as well. It's become clear this winter that the White Sox are intent on building around their strong core of young, cost-controlled players, and trying to make this team a contender. Signing Gordon, to me, would be like going all in on 2016, and possibly putting yourself in a real bind in 2017 and so on. Whether we like it or not, the White Sox don't spend like the Cubs are now, or like the Angels, or Red Sox can.

If you give Alex Gordon a huge contract and he falls off a cliff performance wise, you're stuck with that contract. You're hamstrung by it. I mean, look at how the White Sox are handling the LaRoche deal right now. They don't want to eat it. They're going to do everything they can to avoid doing so.

Obviously that's a risk with any free agent, but I just can't help but believe the risk is greater with Gordon due to his age.

So that's why I'm hoping that the reported interest is a Machiavellian move by Rick Hahn, meant to do nothing more than drive up Gordon's price for the Royals to retain him. After all, while Gordon is the first free agent from Kansas City's core, he won't be the last. In a few years guys like Eric Hosmer, Lorenzo Cain, Alcides Escobar and Mike Moustakas will be free agents too. Maybe if the Royals invest too heavily in Gordon, they won't be able to retain those guys, thereby weakening their long-term potential, and increasing the odds of the White Sox in the AL Central.

If it isn't, however, and the White Sox do end up signing Gordon, I'll continue to be pleased with the initiative, if not overly excited about the decisions.
Adam Dunn Adam LaRoche Alex Gordon Avisail Garcia Brett Lawrie Dexter Fowler Justin Upton Melky Cabrera Rick Hahn Todd Frazier Yoenis Cespedes