What Would Make Todd Frazier Worth It? 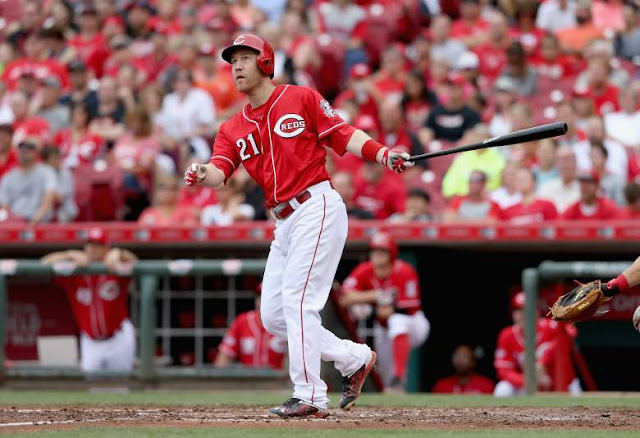 On Monday morning Jon Heyman wrote a story on the trade market for Cincinnati Reds third baseman Todd Frazier, saying it's starting to "heat up."

In his story, Heyman talks about both the White Sox and Indians being interested in Frazier, which doesn't come as a surprise. Both teams were connected to Frazier during the Winter Meetings, with both reportedly feeling that the asking price was too high.

Personally, I can't help but feel that Heyman's source for the story is likely coming from the Reds side of the equation. I'd guess that they aren't all that thrilled with how the market for Frazier is developing, and they're hoping by telling someone things are heating up, maybe they can entice the Sox or Indians to up their offers.

Specifically, would you want to give up Tim Anderson for Frazier?

Would you be willing to give up Tim Anderson in a trade for Todd Frazier?
— Write Sox (@WriteSox) December 14, 2015


The results were what I expected. The majority are against the idea, and I get it. For years the White Sox traded their prospects for veterans, and it worked in 2005, and helped them win a division in 2008, but that same approach is also a key factor in why the Sox have lost so many games in recent years.

Frazier would certainly be a large upgrade over everything the Sox have at third, and would allow them to move Brett Lawrie to second base, providing a major offensive upgrade at second base over Carlos Sanchez. This could also "solve" the shortstop question, because if you have an infield with Frazier, Lawrie and Jose Abreu, you can afford to have Tyler Saladino as nothing but a defensive player at short. Theoretically, anyway.

The problem is that Frazier may be an upgrade, but he's no sure thing. His power numbers peaked last season, but his average and OBP crashed, and he only has a career OBP of .321 to begin with. Not the best trends for somebody turning 30 next month, and you'd have Frazier for two years before he became a free agent.

Giving up on Tim Anderson may not be worth what you get, but there's another side to that coin.

But, on the other side of that coin, Tim Anderson could just prove to be the next Mike Caruso, or Josh Fields, or Jerry Owens, or Joe Borchard.

Still, the enticing appeal of the unknown will always be a draw until we actually see it fail in front of our own eyes.

I do have an idea, though. One that could make the idea of trading Anderson a lot more palatable.

What if the White Sox agreed to give the Reds Anderson for Frazier, but the Reds had to take on Adam LaRoche as well? Not the entire contract, but if the Sox have reportedly been willing to eat some of LaRoche's deal in trades already this winter.

So the Sox pawn off LaRoche with Anderson, get Frazier, and then use that money they save on LaRoche toward signing a Justin Upton or a Yoenis Cespedes. Then you're essentially trading Tim Anderson for both Todd Frazier and middle-of-the-order power bat.