What You Need To Know About The Todd Frazier Trade

The White Sox have struck again. A week ago they traded for Brett Lawrie, with that trade seemingly taking two days to complete after initial reports surfaced it was going down.

This latest trade happened much more quickly, and came from no where. Jeff Passan first reported the Sox were close to a deal with the Dodgers that involved Frankie Montas. The minds of Sox fans everywhere were sent into a tizzy with the possibilities.

Then, out of clouds came Todd Frazier and the Cincinnati Reds. Turns out it was a three-team deal, with the White Sox getting the third baseman they wanted, but giving up Montas, Micah Johnson and Trayce Thompson in the process.

So what do we need to know about this deal?

WHAT ARE WE GETTING IN TODD FRAZIER?

A huge upgrade at third base. Frazier isn't the centerpiece of any lineup, as his OBP isn't anything to write home about, but he brings actual power to the lineup, and a solid glove to third base. The addition of Frazier also allows the White Sox to move Brett Lawrie to second base, which means they've significantly upgraded two holes on the infield offensively in the last week.

In the last four seasons, Frazier has hit 102 home runs, including 35 last year when he also won the Home Run Derby during the All Star break. Those 102 home runs are 36 more than the procession of players the White Sox trotted out to third base in that same time span.

Simply put, barring an epic collapse on Frazier's part -- and we can't rule that out with any White Sox acquisition, now can we? -- he's the best third baseman the team has had since Joe Crede.

And speaking of Joe Crede, let's check out the players Frazier is most similar to through his age 29 season. 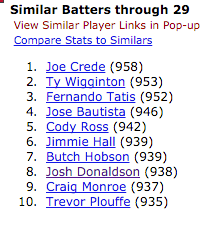 But with a better back!

HOW GOOD IS HIS DEFENSE?

Based on metrics, he's not as good as Tyler Saladino was at third base last year. Saladino, in only 477.2 innings at third last season, was worth 12 defensive runs saved. He's very good there. Frazier, on the other hand, was worth 6 defensive runs saved in 1,371 innings, but that's not just one season. Over the course of the last four seasons he's saved 21 runs.

Comparing him with the rest of MLB third baseman who played at least 900 innings at the position last year, Frazier ranked seventh overall in defensive runs saved, higher than guys like Mike Moustakas, and Evan Longoria. So he's good there. He's not Saladino good, but the difference in offensive production will cancel that out.

WHAT ABOUT THE PLAYERS WE GAVE UP?

Listen, I know you hear that the White Sox gave up Trayce Thompson, and there's a tingle of sadness that shoots down your spine. I get it, I felt the same way. But there are a couple of ways to look at this.

You could say that the Sox just gave up three of their top prospects for a guy with two years of control left and wring your hands. You wouldn't be wrong, because that's what they did, it's just that these things are relative.

Let's break down what the Sox are really giving up here.

Frankie Montas could be a starter. He's more likely going to be a relief pitcher, and possibly a very effective one. The kind that one day works the 8th or 9th inning with ease. Considering the Dodgers tried to get Aroldis Chapman a few weeks ago, I'm guessing their plans for Montas lie in the bullpen.

Micah Johnson is a man without a country, and his passport might be expired too. What I'm saying is, he has no position on the field yet, and his bat hasn't really panned out. Plus, with the emergence of Carlos Sanchez last year, and the addition of Lawrie, Johnson had no home on the White Sox anyway. So, yes, he was in the trade, but he wasn't going to be doing much for the White Sox in 2016 anyway. 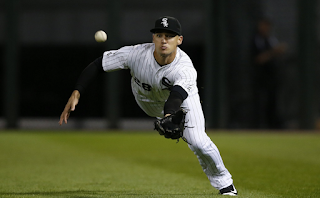 Then there's Trayce. Wonderful, amazing Trayce, how sweet the sound. He came up for 44 games last season and was amazing, slashing .295/.363/.533 with five dingers and a lot of excellent defense. Those 44 games had some Sox fans ready to just hand him a starting job in 2016 after jettisoning either Avisail Garcia or Melky Cabrera.

I wasn't one of them.

I like Trayce, and he could certainly develop into a good player. He has the ability, and at worst he's an excellent fourth outfielder with fantastic defense. Those have value. It's also entirely possible, however, that the White Sox are selling high on him.

Yes, maybe all of that was fixed last year, or maybe Trayce went on a run he'll never quite duplicate again.

I think I know what the more likely scenario is.

So, at the end, the White Sox did give up three pieces for Frazier, but they gave up neither Tim Anderson -- who the Reds really wanted -- or Carson Fulmer to get him. If I'd have told you a month ago the Sox could get Todd Frazier without giving up either of those players, you'd have probably signed up for it.

SO IS AVISAIL GARCIA OUR STARTING RIGHT FIELDER AGAIN?

I wouldn't count on it. It's certainly possible, but I don't think the White Sox are done this winter. All the moves they've made so far have that distinct "all-in" feel to them, and I believe they'll be looking to add an outfielder before it's all said and done.

Now, this outfielder might not be Yoenis Cespedes or Justin Upton. It could just as easily be Dexter Fowler, or Alex Gordon. Or maybe the Sox use those top two prospects they kept to make a move for another outfielder like Carlos Gonzalez.

I think it's safe to say that with the acquisitions of Lawrie and Frazier the Sox plan to let Tyler Saladino and Carlos Sanchez handle short. Which is fine, so long as they get another outfielder.

I wouldn't give it an A+, but as I said, at the end of the day Rick Hahn and the White Sox overwhelmingly upgraded a position without giving up one of their top two prospects. It's hard to be too upset about it.

Prospects are fun to have, and certainly hold value, but as far as I'm concerned, watching a capable team play 162 games has always been more fun than dreaming of prospects.