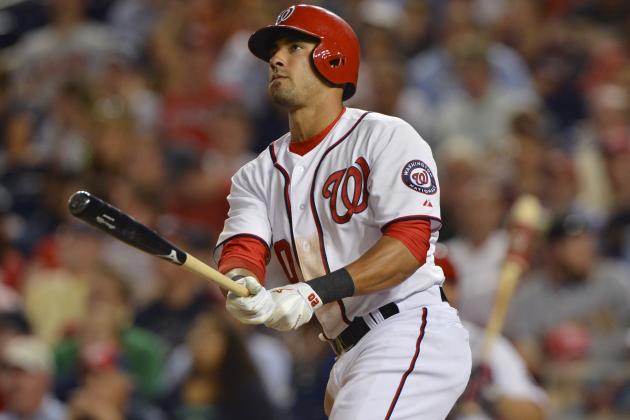 There is still no resolution to the Yoenis Cespedes Saga, though at this point, most White Sox fans have resigned themselves to the fact he won't be signing with the White Sox. Depending on how you felt about Cespedes all along, this is either the WORST THING THAT'S EVER HAPPENED AND JUST PROVES JERRY REINSDORF IS CHEAP AND DOESN'T CARE ABOUT WINNING, or it's the WORST THING THAT'S EVER HAPPENED.

Or, if you're like me, it's just What You Expected To Happen.

Either way, with Sox fans mostly moving on from Cespedes, I've seen many of them start pivoting toward Ian Desmond. You see, there's this phenomenon that occurs with the baseball fan when they've fixated themselves on a big-ticket free agent. If they don't get that free agent, their brain automatically shifts to "we must sign this free agent instead." I believe this happens because, in their minds, they've already spent this money -- that isn't theirs -- on the previous player they wanted, so if that player didn't take it, somebody else must.

And now many seem to feel Desmond is that player. It makes some sense because, as of right now, Tyler Saladino is your starting White Sox shortstop, unless Carlos Sanchez beats him out for the job this spring. Desmond has been one of the top shortstops available all winter, and is definitely an offensive upgrade, yet he remains unsigned.

There are a few reasons for this. One is that he's coming off a terrible season. He hit .233/.290/.384 last year, though he did finish with 19 home runs, and was still worth 2.0 bWAR because of decent defense and the fact there aren't a lot of power-hitting shortstops out there. There's also the fact that any team that signs him must forfeit a draft pick.

Now, all of this plays a reason in why I would prefer the Sox not sign Desmond, but they aren't the only reasons. Honestly, I don't care much about the draft pick. It's the 28th pick in the draft. Sure, it would be a new name to put on a top 10 prospects list, but that's about it. I really do believe that teams have course-corrected a bit too far in recent years, going from not valuing draft picks enough to overvaluing them, but that's an entirely different post, and one I'm not sure I'll ever actually feel like writing about.

My concerns are with Ian Desmond the baseball player.

Desmond puts up nice numbers for a shortstop, but over the last few years, there have been some startling trends. The kind I don't think should be ignored.

But let's compare that to the last two seasons. Since 2014 Desmond's K-rate is 28.7%, his walk rate is 7.1%, and his XBH rate is 7.8%. The strikeouts have dramatically increased, while the walks have increased a little bit, even if they're still below league average. Then there's the decrease in frequency of extra-base hits.

Defensively, the metrics seem to disagree on Desmond. Using defensive runs saved, he was terrible until 2013, but improved to adequate the last two years. UZR says he was really bad, then improved for a few years, and was really bad again last season. I haven't seen Desmond play regularly enough to have my own opinion on his defense, but I think it's safe to assume that he likely falls somewhere between "slightly below average" to "slightly above average" at short.

As strange as it is to say, I honestly would rather roll with Tyler Saladino at shortstop for a year. The White Sox have already improved the infield offense quite a bit with the acquisitions of Todd Frazier and Brett Lawrie, but I'd still like at least one amazing defender on the infield. Frazier's good, Lawrie is somewhat of a question mark at second, and while Jose Abreu isn't as bad as we were led to believe before he came to Chicago, he's not exactly good.

Saladino could be great, though. We got a glimpse of his glove at third base last season, and frankly, it was amazing. While throwing out a LIMITED SAMPLE SIZE caveat, Saladino finished 2015 with 12 defensive runs saved at third base last season. That was good enough to tie Saladino for fourth place in MLB with San Francisco's Mike Duffy. The only three third basemen to finish ahead of them were Adrian Beltre, Nolan Arenado and Manny Machado. But here's the thing, all four of those other third basemen played at least 1,150 innings at third last year.

Saladino saved 12 runs in only 478 innings. Now, this definitely is not how it works, but if Saladino could save 12 runs in 478 innings, prorating that out to 1,150 innings, he'd have saved about 29 runs (AGAIN, THAT'S NOT HOW IT WORKS, THIS IS ALL JUST FOR PERSPECTIVE). Beltre led the league with 18 runs saved.

Saladino could have blown him out of the water had he played an entire season there.

And third isn't Saladino's natural position. Shortstop is. I'd much prefer the White Sox upgraded the outfield rather than just give Desmond a contract because he's there, and it sure feels like an upgrade.

At the end of the day, even if Saladino doesn't hit, he still plays wonderful defense, and that's something you need.

In all reality, Ian Desmond is just another right-handed hitter that strikes out a lot, doesn't walk much, plays okay defense, and occasionally hits a home run.