On Adam Eaton, Bad Thoughts And The Perils Of Social Media 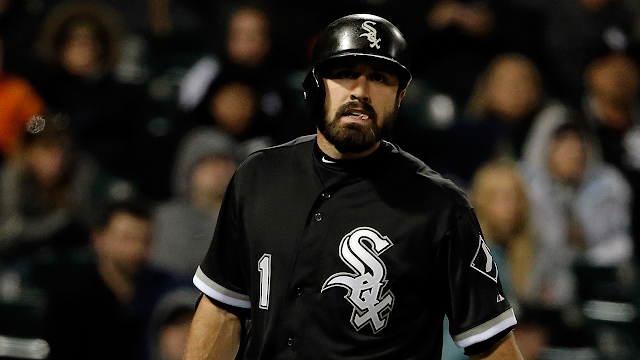 Adam Eaton got into some shit on Sunday night when he tweeted about Chris Rock and the general tone of the Oscars broadcast. As you would expect, Chris Rock didn't pull many punches when it came to addressing the lack of diversity not just in those nominated for an Oscar this year, but in Hollywood in general.

While Eaton deleted the original tweets, what he basically said was "why does everything have to be a black and white issue?" As typically happens on Twitter when somebody expresses an honest thought or question, people reacted to his tweets. Some positively, but most negatively.

And they should have.

While I don't think there was any malice in Eaton's tweets directed toward anybody, they were still incredibly naive and insensitive to the reality of the situation. The simple fact is, just because you aren't racist (or at least don't consider yourself to be) doesn't mean racism doesn't exist. So to pretend Chris Rock, or anybody, is making a mountain out of the proverbial mole hill is insulting to those who see the world from a perspective entirely foreign to your own.

To his credit, Eaton realized this rather quickly, as he issued an apology for his tweets on Sunday night, and then again on Monday when he was asked about it by reporters.

“I feel terrible. I truly do,” Eaton said. “However it came across, I feel terrible. It was a tweet to basically talk about equality ... I apologize to anybody that was offended. I’m not by any stretch of the imagination trying to downplay racism in this country.

“(I thought) the response I would receive would be, ‘Yeah, Adam, it’s good. We need equality, we need to be created equal, we all need to be pushing in the right direction,' and that’s kind of how I felt my tweet was worded ... I guess I left it open-ended, and being someone that does media a lot, I should have clarified a little more and not even stepped into that realm.”

Now, while this issue seems to be resolved, there's still the part where this becomes a problem in the first place. It's one of the side effects of social media, as we not only get to feel "closer" to the athletes on the teams we root for, but we sometimes get a peak behind the curtain, and we're not always going to like what we see.

Which is probably why Robin Ventura doesn't like his players being on social media in the first place.

I agree with Ventura here.

I mean, think about it. What does the athlete really have to gain with social media? And what to you have to gain? Do you ever follow athletes on Twitter? The majority of accounts are run by a player's PR tweeting out endorsements, or players tweeting motivational quotes, or just spewing the same cliches they give to the media.

Occasionally there's the one athlete that not only shows their personality on Twitter, but turns out to be pretty funny too, even if we're grading on a curve.

And for players like Eaton, who actually share their thoughts on Twitter and believe it's just a nice way to interact with their fans, it's only a matter of time before you find yourself in the middle of some "controversy." Trust me, I spend a lot of time on Twitter, and there's nothing the fine folks of Twitter do better than find reasons to be pissed off about something.

Adam Eaton, and any other player in the public eye, may want to consider the option as well.
Adam Eaton Robin Ventura