So Let's Talk About Andre Ethier 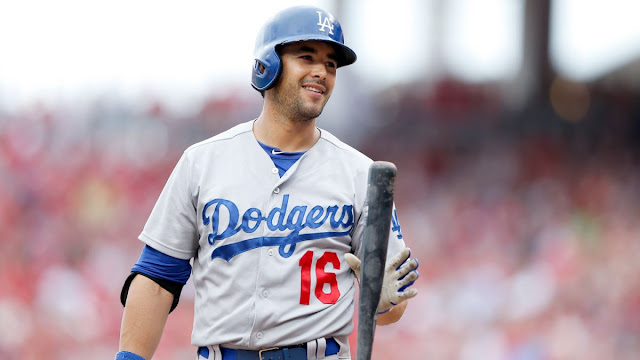 It's been a while since we've had ourselves a new White Sox rumor. The Sox were continually attached to free agent names like Alex Gordon and Yoenis Cespedes, but those never amounted to anything, as both chose to stay where they already were. That left Sox fans heading into February with no real idea of what to expect.

Were they going to go after Dexter Fowler? Ian Desmond? Were they just going to lick their wounds after missing out on top free agents, and stand pat? We really didn't know until Rick Hahn said during SoxFest that they weren't done trying to build the roster.

He made no promises, but Hahn certainly gave the impression he was still active. Hell, he said on Friday that he'd been on the phone before making his way to the festivities.

Then, lo and behold, a day after SoxFest comes to an end, Phil Rogers drops this little ditty on the Twitter.

Not clear if there's a match but #WhiteSox are exploring #Dodgers Andre Ethier. His 2.7 WAR in '15 would be 4th best in their lineup.
— Phil Rogers (@philgrogers) February 1, 2016

But what to make of it? I don't know, but I'm going to try to figure it out. Feel free to read along as I discuss the idea with myself.

WHY WOULD THE DODGERS WANT TO GIVE UP ETHIER?

Well, I'm not sure that they really want to, but there are reasons to think they'd certainly consider it. As things currently stand, the Dodgers have Yasiel Puig, Joc Pederson, Carl Crawford, Scott Van Slyke, Alex Guerrero, and Enrique Hernandez on the 40-man roster, and all of them, along with Ethier, are outfielders.

Oh, and there's Trayce Thompson too, whom the Dodgers just got from the White Sox in the Todd Frazier trade.

Also, as crazy as it may sound considering they're the Dodgers, and they've just been throwing money around the last few years, this is a team that's trying to shrink payroll a bit. Andrew Friedman came from Tampa Bay, where he got as much as he could with a limited payroll, and while he certainly has a much larger wallet to work with, his overall philosophy hasn't changed. If it had there's no way Arizona is out-bidding the Dodgers for Zack Greinke this winter.

Which brings us to Ethier, who is owed $35.5 million over the next two seasons. He also has a team option for $17.5 million in 2018 that can be bought out for $2.5 million, so he's guaranteed at least another $38 million. Also, Ethier's "ten-and-five" rights will kick in this April because he's been in the Majors for at least 10 seasons, the last five with the same team (they've all been with the Dodgers).

That gives him the right to block any trade, so if the Dodgers were going to move Ethier in a trade, it will be a helluva lot easier to do so before the season begins.

WHY WOULD THE WHITE SOX WANT ETHIER?

You've seen Avisail Garcia. You know why the White Sox are interested in Ethier. If there's any competent outfielder available, the Sox are probably interested.

In other words, he does a lot of things the White Sox need, and while he's not a great defender -- though he did win a Gold Glove in 2011 -- he's better than Garcia is in right field.

HOW WOULD THE WHITE SOX USE HIM?

That's a very important question. Here's the thing about Ethier: while he's been a good hitter in his career, it's righties that he's destroyed. He's a career .304/.383/.507 hitter against right-handed pitching. That's fantastic!

So it's possible that the idea could be to platoon Ethier in right field with Garcia, because while I'm certainly no believer in Avisail, the fact is he hits lefties rather well. Avi has hit .284/.341/.424 against lefties.

Of course, while it seems like an ideal situation, it also presents some problems. The fact is, if you're going to bring in Ethier with the plan to platoon him, that means either he or Adam LaRoche is going to have to play against lefties. Garcia can't serve as a platoon partner with both.

So maybe you give a guy like Jerry Sands -- another lefty killer -- the job of platooning at DH with LaRoche, but if you do that, you're saddling Robin Ventura with a bench that consists of your other catcher, Carlos Sanchez, Sands and Garcia. There isn't much flexibility there.

OKAY, BUT IS ETHIER SOMEBODY THE SOX SHOULD WANT?

That's what I'm not sure of. There are different ways to look at it. Yes, if you trade for Ethier, and you take on the entirety of his contract, you're going to owe at least $38 million. Well, a guy like Dexter Fowler probably isn't going to be any cheaper than that if you sign him to a three-year deal, and he costs a draft pick. So Ethier could be a cheaper target that allows the Sox to retain the comp pick, and the bonus pool that comes with it.

But there are red flags too, there always are.

First of all, Ethier will turn 34 in April. Fowler will turn 30 in March. So, while Fowler might cost a little more, history suggests you're likely to get more for your money over the length of Fowler's deal than you are Ethier's.

Also, not only is Ethier going to be 34, but he's going to be a 34-year old career National Leaguer adjusting to the American League. That hasn't worked out very well for the White Sox lately, though saying that, Ethier is a much different hitter than LaRoche or Adam Dunn ever were.

Those two were just big sluggers that didn't really provide anything but some home runs and walks, and not being great athletes, they declined quickly. Ethier is more of an athlete, which means he's likely to age a bit better.

Still, it's a legitimate worry.

SO WOULD YOU TRADE FOR ANDRE ETHIER?

He's not my top plan, but depending on what you give up for him, it could easily be worth it. It's just a question of how motivated the Dodgers actually are to move him, and why? If they're looking to make room and dump salary, he won't cost much if you want to take on his entire salary.

But say the plan is to get the Dodgers to eat some of the money so you have cash left to sign Ian Desmond. In order to do that, you'll have to give them something in return. You're obviously not going to give them Tim Anderson or Carson Fulmer, and you probably don't want to give them Spencer Adams, either.

So what's it going to cost?

It's just hard to really judge the idea without the entire picture, but I will admit that I've warmed up to the idea a bit more as I've thought about it.
Adam LaRoche Andre Ethier Avisail Garcia Carson Fulmer Dexter Fowler Ian Desmond Rick Hahn Spencer Adams Tim Anderson Todd Frazier