The Five Stages Of Avisail Garcia 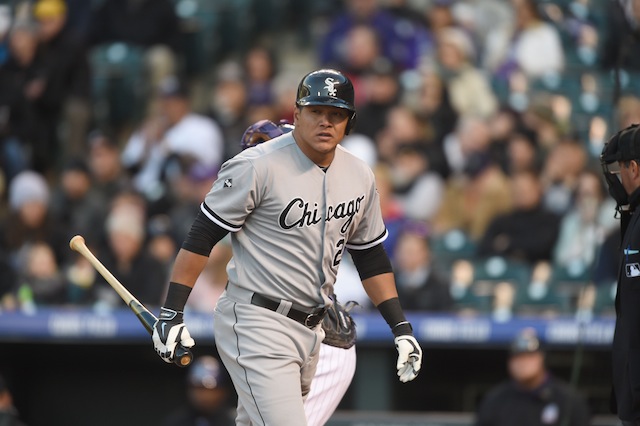 When news broke that the Orioles were going to sign Dexter Fowler on Tuesday, the reaction from a lot of White Sox fans, particularly on Twitter, wasn't exactly a surprise. Fowler became the latest free agent outfielder to sign with a team that wasn't the White Sox, joining Alex Gordon, Justin Upton, Jason Heyward (though that was never going to happen), and Yoenis Cespedes.

And the masses, they were angry.

All were angry because it was just another sign that the White Sox are headed toward another season of Avisail Garcia, who is the real root of the problem, whether it's fair to him or not.

And I think it's time we all talked about our feelings when it comes to Avisail, and how we're coping with the idea of him playing 150 games next season.

The Five Stages Of Avisail Garcia

It's early in the 2015 season. After missing most of 2014 with a shoulder injury, White Sox fans are still optimistic about Garcia's talent and ceiling. They ignore the fact that throughout his minor league career, he has never shown any real power potential, or a discernible eye at the plate. He's still really young, after all, and these are things he can still learn at the Major League level.

Through the first two months of the season, it appears everything is on schedule. By the end of May Garcia is hitting .323/.360/.445, which looks really good when compared to the rest of the shit show that the White Sox offense has been to that point. Sure, he has a walk rate of 4.9%, and a strikeout rate of 22.6%, but he can still learn! And, hey, that BABIP of .404 is totally sustainable.

It's not like pitchers are going to realize he swings at everything, and will adjust to him.

But then they do.

The season ends, and by and large, while there are some still clinging to the fact Garcia will only be 24 when the 2016 season starts, the patience has worn rather thin amongst the White Sox faithful. The team is coming off another bad season, and we're all looking for people to blame for it.

There are plenty of targets, but Avisail attracts quite a bit of attention, and deservedly so. He finishes the year worth a whopping -1.1 fWAR, the worst number among MLB outfielders that played enough innings to qualify for a batting title. Sure, Melky Cabrera was third-worst, but he was never the hyped return in a trade. The next big thing for the White Sox offense.

Avisail was supposed to be somebody, and it's looking more and more like he won't be. The anger burns.

Maybe we can trade him!

The Colorado Rockies are looking to rebuild and shed salary! Carlos Gonzalez is on the block! I'm sure Avisail Garcia is exactly the kind of young, toolsy player they'd be looking for in return!

Seriously, somebody will surely want him, even if it isn't the Rockies. So many tools! Surely it's only we, the White Sox faithful, who realize he sucks now. Other teams will line up for a chance to have the great Avisail Garcia looking impressive in their uniform!

And even if they don't, Trayce Thompson had an unbelievable month of September, performing at a rate that he can easily maintain despite no track record proving so. So it's not like we have to give Avi the starting job, even if we don't trade him. We'll be fine.

Jesus fucking Christ we're doomed to another year of Avisail aren't we? Why? What sense does this all make? Why trade for Brett Lawrie and Todd Frazier if you're just going to keep Avi as your right fielder?

Avisail Garcia is going to be our starting right fielder, at least until the summer. Then, maybe if things go right, and all the other moves work out, we'll be in contention for a playoff spot, and Rick Hahn can make a move then, when more options make themselves available.

Hey, Garcia isn't good, okay? He's never going to live up to the Lil' Miggy nickname he had with the Tigers, but maybe at the very least he can be league average. A league average right fielder would be a nice improvement on last season!

It would be enough to tread water until July, when we can finally make that Carlos Gonzalez trade for real.

*I have not yet reached this stage, maybe in reality there are only four stages to Avisail Garcia, or maybe I'm still in denial
Avisail Garcia