What You Need To Know About The Mat Latos Signing 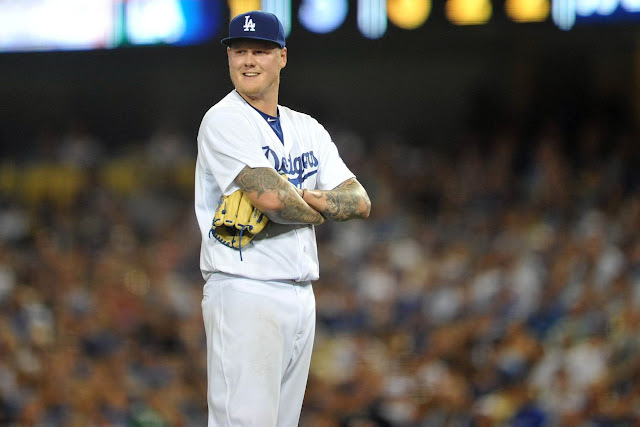 The White Sox did a thing!

No, it wasn't signing Dexter Fowler, or even Ian Desmond if you're into that kind of thing, but it was a free agent signing. And it did address an area of concern that I've expressed my desires to see addressed quite a few times, even while the majority of Sox fans have kept their eyes on the outfield situation.

The White Sox signed Mat Latos to a one year, $3 million deal to add much-needed depth to the back end of the starting rotation. Latos isn't my dream scenario of trading for Carlos Gomez and signing Yovani Gallardo, but it's still exactly the kind of move I wanted the Sox to make, even if it's not the biggest possible impact at the spot.

But let's break this all down a bit with the relevant info.

By all accounts, yeah. I don't think he's been with a team he didn't complain about at some point, though I suppose it's possible he didn't bitch about the Dodgers clubhouse since he wasn't there very long last year. Still, whether he's been in San Diego, Cincinnati or Miami, there always seems to be some kind of a problem.

Which seems to be a theme to the White Sox lately, doesn't it? When Adam Eaton came here via trade, some of his former teammates were happy to throw him under the bus and label him a BAD TEAMMATE. Then the Sox traded for Jeff Samardzija, whom Hawk characterized as a Captain of Attitude, but that's just code for "asshole." Then this winter the Sox traded for Brett Lawrie, who has rubbed plenty of teammates the wrong way.

But the thing about clubhouse chemistry is, nobody mentions it unless a team is losing. Every clubhouse has people in it that don't like each other. Just look at your job. How many people do you work with on a daily basis? If you have 24 co-workers, three or four supervisors, and a boss who works under a series of other bosses, I bet you're going to hate at least four of those people.

It's just how shit works.

If the Sox win, we won't hear about it. If they lose, columnists won't have much trouble filling inches.

Yeah, but he's not some kind of ace. He's just a dude who, ideally, eats up innings at the back of the rotation, and gives you a chance to win games more often than not. And Latos is certainly capable of doing that, with even a bit of a limited upside. It's possible that, if all things go well, Latos could have No. 3 starter production, and do so at a price tag of only $3 million for one season.

Now, if you look at his stats over the last two years, you aren't going to be thrilled. He's made only 37 starts in those two years, and put up an ERA of 4.16 in 218.2 innings. It should be noted, however, that Latos had an FIP of 3.69 in that time, which isn't amazing, but is certainly respectable.

Also, it's important to remember that Latos had elbow surgery to remove bone chips following the 2013 season. Then he had surgery to repair a torn meniscus in his left knee that kept him off the mound until June in 2014.

It wasn't much of a surprise that in 2014, following the surgeries, the velocity on Latos' fastball dropped from 92.6 MPH to 90.7 MPH. The good news is it bounced back a bit last season, averaging out at 91.5 MPH, but increasing as the season went along. All of which bodes well for Latos as he heads into 2016, roughly two years following the elbow and knee surgeries.

I don't think it's a surprise that Latos chose to sign a one-year deal with the White Sox, who have been fantastic at keeping their pitchers healthy. So it's a signing that could work out really well for both parties, because if the Sox keep Latos healthy, and he's effective, he'll head into the winter as a 29-year old free agent, and will likely get a nice contract.

IS HE GOING TO MAKE THE TEAM?

Nothing is a guarantee, but yeah, I think it's safe to say he'll be on the Opening Day roster barring an injury. There's a reason the White Sox signed him, and it's because they don't want to head into the season having to rely on Erik Johnson or Jacob Turner without other options. You're much better off having Latos as a cushion should something happen to somebody else.

Simply put, the Latos signing puts the Sox in a situation where they won't have to rely on Chris Beck to start a game when Carlos Rodon develops a blister and misses a start. Instead it'll be Johnson or Turner getting that start.

It's still not ideal, but it's better than the alternative.

WELL WHOSE SPOT IS LATOS GOING TO TAKE THEN?

I'd put my money on Erik Johnson, but not because he's worse than Turner. It's just a simple question of minor league options. Johnson has some remaining. Turner doesn't. So if the Sox want to send Turner to Charlotte, he needs to clear waivers. Considering the Sox signed Turner off waivers, the odds of that happening aren't great.

But Johnson can just be sent to Charlotte with Turner breaking camp with the team as the longman out of the bullpen.

ARE THE WHITE SOX DONE NOW?

I don't think so, no. There are other ways this Latos signing can go. Yes, he adds depth to the rotation, but it's also possible that signing Latos means the Sox can afford to trade Erik Johnson in a deal for another outfielder.

Or it could go the other way. If the White Sox were planning on signing Dexter Fowler, I don't think giving Latos $3 million for 2016 does anything to ruin that deal. The money should still be there.

As should the initiative.

Simply put, the White Sox are a new outfielder away from a great winter, and I think they're going to get there.
Carlos Rodon Chris Beck Erik Johnson Jacob Turner Mat Latos