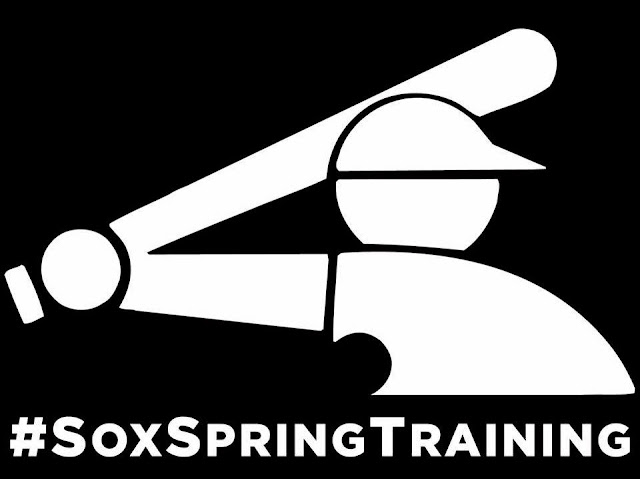 Every year, as I sit through the winter, I long for spring training to finally get here, and when it does, I'm disappointed. It's one of the few things I can count on every February, aside from some leftover chocolates The Lady doesn't want.

For me, spring training is just another sign that the baseball season -- the real baseball season -- is that much closer. Inevitably I'll try to watch a game that the Sox are streaming online, or one that's actually televised, but again, I get bored quickly.

Still, even if I don't truly enjoy it, what I try to do every spring is find a few different things to actually give a fuck about. It helps the whole thing go by a little quicker for me.

So, with pitchers and catchers officially reporting on Friday, I figured I'd write about the things I'm actually going to pay attention to.

THE BATTLE FOR SHORTSTOP

I think we're making a mistake just assuming that Tyler Saladino is going to be our starting shortstop when the season begins, assuming the Sox don't sign Ian Desmond. I'm just as guilty of it as anybody else, but Carlos Sanchez has become a bit of an afterthought, and I don't think that's the wisest way to approach this situation.

Neither really present an enticing offensive option, but there's one thing we need to remember when it comes to Saladino and Sanchez. If we pay attention to their pasts, one of the two has actually shown the ability to hit a little bit during his professional career, and it isn't Saladino.

While Tyler had one really good season with Charlotte in 2014 that props up his overall numbers, in six seasons as a minor leaguer, he hit .261/.351/.395. The OBP is nice, but he didn't strike out nearly as often in the minors as he's shown a propensity for in the bigs.

Compare that to Carlos Sanchez, who didn't exactly tear things up as a minor leaguer, but still hit .288/.354/.369 in six seasons, and was a bit more consistent from year to year, and stop to stop.

Plus, it's important to remember that Sanchez is only 23, and won't be 24 until June. The few that defend Avisail Garcia throw his age at you every chance you get, but Sanchez is even younger, and unlike Avi, he hasn't had 1,000 Major League plate appearances. There's still a possibility for growth there.

Still, what I think it will come down to is their defense. Saladino was amazing at third last year, and I felt Sanchez was pretty good at second. We haven't had a chance to really see either at short, though both spent time there in the minors.

If Sanchez shows he's capable of playing the position, and provides more offensive support, this job could be his. Saladino would then serve in more of a utility guy off the bench, which is probably the role he was born to play anyway.

SPEAKING OF SHORTSTOPS, I'LL BE WATCHING TIM ANDERSON TOO

The chance to watch a top White Sox prospect that's a position player -- and at a position of great importance! -- just comes around so rarely, I have a hard time passing it up.

I don't think anything Tim Anderson does this spring is going to earn him a job on the Opening Day roster, and I don't want him to be on it anyway. This organization has been rushing players for years now, and while it's worked for some pitchers -- though guys like Sale and Rodon were college pitchers with really good stuff -- it hasn't worked for position players. So learn from the mistakes. Send Anderson to Charlotte with no intent of bringing him up in June or July, but instead just to let him learn for another year.

Before that happens, though, I want to watch Anderson in Arizona. And I want him to do well. I want those memories to hold on to as I'm watching Carlos Sanchez and Tyler Saladino play shortstop every day during the season.

I'm going to need them.

Though I really don't think it's much of a battle. I'm fairly certain that unless Mat Latos calls Robin Ventura an asshole during every press conference, and shits in all his teammates shoes on a daily basis, he's going to earn a spot in the rotation. So all five spots are full.

But what if they aren't?

Now, this isn't likely to happen, but what if Jacob Turner or Erik Johnson pitch so damn well this spring that the Sox actually make John Danks the long man out of the pen? Wouldn't that be something?

Like I said, I doubt it will happen. In fact, I'd put a good amount of money on the back end of the rotation being Latos and Danks, with Turner as the long man, and Erik Johnson in Charlotte. Why? Because Johnson has options left. Turner doesn't.

It's so damn strange to think that players are reporting to Glendale, yet, the entire team may not actually be put together yet. And I don't just mean from the final roster standpoint. I mean from the "there are still free agents out there waiting to be signed."

It looks more and more likely that the White Sox won't sign Dexter Fowler. They either just don't like him, don't want to give up the draft pick, or both. I don't know. I just know that I want somebody in camp that can really challenge Avisail Garcia for his starting job, and I really don't think JB Shuck or Jerry Sands are the men to do it.

Even if it's Austin Jackson at this point, I'll accept it. Just do something.

Everything I've already mentioned pales in comparison to this. What I want more than anything else this spring is for everyone to leave Arizona and head to Oakland intact. No strange injuries jumping off your truck, or during a game.