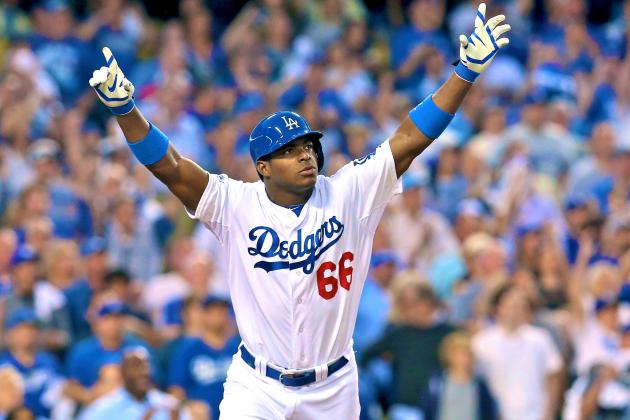 On Thursday MLB.com's Scott Merkin, a lovely man who cares a bit too much about Michigan athletics, posed a question to the White Sox universe.

If the White Sox are interested in Andre Ethier, which seems to be the case if we can trust Phil Rogers and Bruce Levine, why not trade for Yasiel Puig? I mean, it makes sense. If the Dodgers are looking to clear up their outfield logjam by getting rid of Ethier, shipping off Puig in a trade would provide the same relief.

Essentially, what Merkin wants to know is, if you're looking to get drunk, why buy the Jim Beam when there's a bottle of Bulleit Rye right next to it?

On the surface it seems like an obvious choice, but there's a lot more to it than that. While I'd definitely prefer the Bulleit to Beam, I'd rather have Ethier than Puig, and I'm not exactly dying to get my hands on Ethier.

Why don't I want him? Well, there are quite a few reasons, actually, and since I'm so damn nice, and I don't have a bottle of Bulleit handy right now to distract me, I'll go over them.

One thing we have to consider is that it's not like the Dodgers have a gun to their heads and are being forced to trade Ethier. It's just the idea makes sense, as they have plenty of outfielders, and once April comes, his 10-5 rights will kick in, making it a lot harder to trade him. Plus, his contract isn't an albatross for the Dodgers, but they wouldn't mind shedding themselves of it either as they try to trim the payroll to a more reasonable level. Plus, Ethier's going to be 34 in April.

These are all logical reasons to explore the idea of moving him in a deal to get something for him while you still can. The problem for the Dodgers is, they're also reasons why the return likely won't be anything extraordinary should a trade come to fruition.

That's not the case with Yasiel Puig.

That bat-flipping son of a bitch might actually get better.

So if the White Sox were going to trade for Puig, he'd cost a lot more than whatever fringe prospect or two Ethier would command. I'm talking Carson Fulmer, Tim Anderson, Spencer Adams, and maybe even a regular to boot. I mean, if you're the Dodgers, the first name you mention is Chris Sale with the more realistic goal of Jose Quintana, right?

So, yeah, Puig could certainly prove to be a much better player for the White Sox than Ethier, but you'll have to pay for that in bodies if not in salary.

THE LINEUP REALLY COULD USE ANOTHER LEFTY

Of all my reasons for not wanting Puig, this is easily the least concerning, but it's still valid. After adding Todd Frazier and Brett Lawrie to the lineup this winter, the Sox added at least one proven bat, and one they hope can find its potential. They also added two more righties in the process.

While Andre Ethier would be a platoon player for the Sox, it's important to remember that platoons don't mean quite as much to the White Sox as they do other teams. To generalize matters, all the left-handed starting pitchers in the AL Central are basically on the White Sox.

The Sox played 162 games last year. I know it seemed like thousands more, but I assure you, it was only 162. In those 162 games they faced a left-handed starter only 36 times. That means, if Robin Ventura used a true platoon in right field this year between Ethier and Avisail Garcia, Avi would only be starting somewhere between 35-40 games.

Just look at the rotations around the division. As of right now the only projected lefty starters are Daniel Norris, Danny Duffy, and Tommy Milone. That's it. The White Sox have more lefty starters in their projected rotation (four) than the rest of the division combined (three).

So do you want all your big bats to be righties while playing the overwhelming majority of your games within the division?

Granted, Puig isn't exactly a slouch against righties, but his OBP does dip quite a bit against them.

WHY DO THE DODGERS WANT TO TRADE PUIG?

This is my biggest concern about Puig. White Sox or no White Sox, there were whispers that the Dodgers were willing to trade Puig this winter after last season ended.

Why would a Dodgers team with an outfield logjam be looking to trade its young, uber-talented outfielder instead of its aging, over-priced options like Ethier and Carl Crawford? It doesn't make much sense, right?

Well, it's because, even though Puig is a really exciting baseball player, and far and away one of my favorite players to watch whenever the hell I can, he's also by many accounts a total asshat.

Don Mattingly wanted to strangle him at times, as did other Dodgers coaches and his teammates. According to Andy Van Slyke, the former player and father of yet another Dodgers outfielder Scott Van Slyke, Clayton Kershaw wanted the Dodgers to trade him.

Now, it's important to remember that Puig came to the United States as a 22-year old kid who came from nothing in Cuba, and he experienced hell getting here. It's not exactly a rarity that a young kid who comes from nothing and is suddenly handed everything he's ever dreamed of might take things to a bit of an extreme. I mean, if you'd have handed my ass $42 million when I was 22, I'd have acted like an asshole for a while too.

So, you know, maybe he matures and under the tutelage of Jose Abreu -- who was five years older than Puig when he got here -- he becomes a much better teammate. But let's not forget that the Sox have already added Brett Lawrie to the mix this winter, and he wasn't exactly the most popular dude in that Oakland clubhouse last year.

The point is, when you're at home playing with your chemistry set, sometimes you pour the wrong shit into your beaker, and the next thing you know is you're going to have a lot of explaining to do when mom and dad get home.

I'm not sure adding the headache that is Yasiel Puig to the mix would be in the best interests of the White Sox long term.