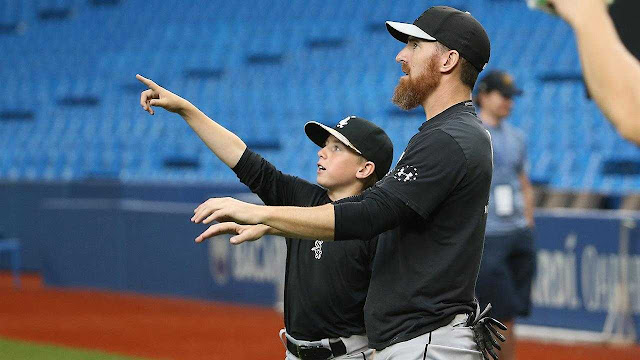 You may have noticed that, in spite it being one of the major sports stories in the country this week, I haven't written a damn word about the drama surrounding the White Sox and Adam LaRoche (well, okay, I did do this). I wrote about LaRoche retiring, and about how the Sox can go about replacing him, but I didn't touch the soap opera.

It's not that I don't have thoughts on it -- I have plenty. It's just that I created this site for my own personal amusement. This is exactly the kind of story I'd cover the hell out of if this site was meant to serve an actual purpose. This is a story that gets dem clicks.

That's why the local media, national media, and everything in between are covering the hell out of it. It's a ridiculous story, and one that you can't wait to see what happens next.

It's also the kind of story that, were I covering it for work, I'd have burned out on very quickly. I'll tweet dumbass jokes about it, but when it comes to actually covering it like it's important, no thanks.

So being the genius that I am, I decided to start a mailbag for the site. I don't know how often I'll do it, or if I'll even do a second one, but I just wanted to at least try it. And of course a bunch of the questions sent in are about Adam LaRoche and this mess.

Maybe somewhere deep in my subconscious I want to write about it. Or maybe I just hate myself.

Anyway, let's get to the god damn LaRoche questions.

@WriteSox does this Laroche distraction end once the season starts? If so does it cost anyone their job? #SoxBag
— Bryan Warcholek (@bryanwarcholek) March 18, 2016


I would think it'll end before then, actually. News cycles are news cycles and they tend to turn over pretty quickly. That being said, it could totally be a situation that lingers, but it'll probably depend on how the White Sox do more than anything else.

If the Sox get off to a slow start it'll be really easy for people to pin it on "team chemistry." You'll see columns about how the great divide in the White Sox locker room has destroyed the team's chances to win! It's all Kenny Williams' fault! It'll beat trying to find the real reason why the team isn't playing well.

If they start off the season well, though, everybody will move on and focus on that instead. It's possible that somebody will spin a "White Sox rally around common enemy in Kenny Williams and are now closer than every before" narrative to explain it, but that'd be about the extent of it.

How old is too old to constantly be at your parents' place of employment all the time always https://t.co/VEWcf7NL5y
— Nick (@nelush) March 18, 2016


I'm going to say seven or eight because your ass should definitely be in school by then.


I'm assuming you mean Paul Sullivan, and you later clarified you meant there's no way they can trade him.

They can totally keep Sale. The thing about a situation like this is that, when you're in it, you tend to make a much bigger deal of it than it actually is. That's exactly what Paul Sullivan is doing when he says the Sox can't keep Chris Sale after this.

Yes they can, and they can do it rather easily. Kenny Williams is very much present in this story, but he's not the general manager or the manager.  He's not in that locker room every day. He still has a major role within the organization, but it's not like Kenny is looking over everybody's shoulder all the time.

So he can easily co-exist with Chris Sale, and now the Sox don't have to trade him.

If they ever do trade him, it won't be because of this. It'll be because they continue to be horrible and decide it's time to go for the full-on rebuild. That's the only reason you ever trade Chris Sale.

What would it take for Sox to trade Sale to the Cubs?


Staying on topic here, a lot. I can't really give you an exact answer on the return, but starting with Schwarber is a good place to begin. So many times when you see these kinds of trade proposals from fans of other teams, they think just listing their top prospects is enough. It isn't.

As for the players you list, I don't want Javy Baez. I've never liked him, and I can't help but believe there's a reason the Cubs did everything in their power to make sure they wouldn't have to rely on Baez this winter.

They added Zobrist to take away his spot on the infield, and then after there was talk of trying him in the outfield they got Heyward and Fowler. I'd rather have Dan Vogelbach than Javy Baez.

@WriteSox knowing how important a strong start is, What would be your ideal (realistic) April Record? #SoxBag
— Logan Hard (@LoganHard) March 18, 2016


Well, shit, according to Adam Eaton, the start is the most important thing in the world. According to him the season was over after the Sox started 0-3 against Kansas City last year.

In all seriousness, getting off to a nice start is probably important for the Sox simply because they've been so bad the last few years. You really don't want that doubt creeping in early, because while I was making fun of Eaton a paragraph ago, it's not totally crazy.

On the other side of that coin, however, a bad April might be bad from a mental standpoint, but from an AL Central view, it wouldn't be horrible. The Sox play 26 games in April, but only six of them are against division opponents (three against Cleveland, three against Minnesota). So even if they're only 12-14 at the end of the month, I won't be flipping out. Ideally I'd like to see them more in that 15-11 area.

Now, no matter what happens, May is when they'll need to make sure they have their shit together. That's when 13 of their 28 games will be within the division, and those division games are going to be critically important.

@WriteSox who bats second for the sox this year? Is Melky the new DH or should we expect another transaction in the coming days? #soxbag
— Simon Farber (@Farbsy15) March 18, 2016

I know who I want to hit second, and that's Jose Abreu. Even if Robin was willing to try it for a while last year, I believe he only did it because everybody else had failed there already, and I think he'll continue to look at every other possible option first.

Operating under the assumption it won't be Abreu, I'd be okay with giving Melky another shot there, but I'd also wager that guys like Brett Lawrie, Austin Jackson and even Jimmy Rollins get shots there first simply because they seem like the kind of hitters Robin likes there.

As for the designated hitter, it's going to be a rotation now, which it should have been even if LaRoche were still there. Melky will see time there, as will a bunch of guys, but I would rather Avisail Garcia spend more time at DH than Melky. Cabrera isn't going to be confused for a Gold Glover or anything, but he's a better outfielder than Garcia is. I know that's not saying much, but it's true.

Plus Melky needs to be out in the field as much as possible because he's an interesting person to watch during a game. He is easily the most enjoyable White Sox outfielder to watch between pitches since Carlos Lee.

Ever just watch outfielders during a game? I've done it for as long as I remember. The reason I do it is because I remember playing the outfield sometimes in Little League and thinking about how fucking boring it was to play the outfield.

What I've learned is that, even with a lot more outfield action in the bigs, plenty of outfielders also find it to be boring out there.


Sorry, I don't. I used to pay a lot more attention to that kind of stuff than I do now, but the older I get, the more I only care about the product I'm actually watching on a daily basis. That's not to say I don't keep tabs on prospects in the system already, but as far as the draft and international free agents, no thanks.

If Avi wants to continue hitting like this in the regular season, I'm all for it. Until he does I will remain extremely skeptical.

@WriteSox The was all just a ruse to free up the #25 for when Jim Thome inevitably replaces Robin Ventura as manager, right? #SoxBag
— Dan Johnson (@johndan22) March 19, 2016