How Should The White Sox Replace Adam LaRoche? 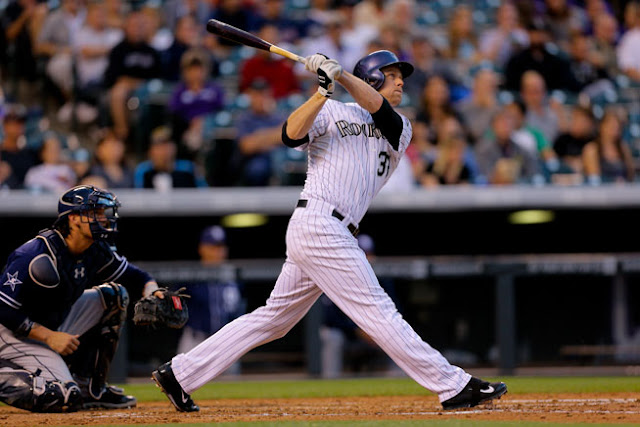 Yesterday's news that Adam LaRoche caught everybody by surprise. You weren't expecting it, I wasn't expecting it, not even Rick Hahn knew it was coming. That's not much of a lede, but it's good enough to serve as my excuse.

You see, when I wrote up LaRoche's retirement yesterday, and what it means for the White Sox, I forgot about an option for them moving forward. Thankfully Christina Kahrl didn't.

I didn't even think to include Justin Morneau as a possible replacement for LaRoche. Not because I forgot Morneau existed, but because I didn't even realize he's a free agent. I figured he was just still with the Rockies.

That's what this weird ass offseason has done. I mean, David Freese, the guy who was probably the top free agent at third base this winter didn't sign with anybody until last week. So I never even considered him an option.

But now that I've seen the error of my ways, what about Justin Morneau? To start things off I figured I'd ask everybody what they thought the White Sox should do in the wake of LaRoche's retirement. I presented them with three options.

Trading for Jay Bruce, signing Justin Morneau, or just going with what they already have. I was not that surprised by the results.

Morneau won, though not by much. The surprise wasn't that Morneau received the most votes, but that the internal options were so close to winning.

So what's the best option for the White Sox? Let's weigh them to find out. We'll start with the newest one.

Here's the thing about Morneau. The White Sox don't have to pay Adam LaRoche's $13 million anymore, which obviously frees up some money. Well, Morneau made $6.75 million with the Rockies last season. Considering it's now March 16, he'll probably cost less than half of that if the White Sox want to make him an offer.

Morneau is also somebody who still hits righties extremely well, posting an OPS+ of 125 against them last season, and 115 (with an OBP of .374) for his entire career.

So if you bring Morneau in he can serve as the left-handed portion of a platoon at designated hitter, while you have some combination of Avisail Garcia, Melky Cabrera and Austin Jackson or whomever you choose as the other half.

Morneau can also serve as the occasional first baseman behind Jose Abreu, which is another area the Sox need to address without LaRoche.

Now, these things all sound great, but it's not as if there aren't negatives. It's important to not that, like LaRoche, Morneau isn't exactly young. He'll turn 35 in May. Furthermore, while his road splits were solid in 2014, they were pretty damn bad last year.

Last season Morneau hit .397/.436/.589 at Coors Field and .242/.308/.358 outside of it. Granted, that'd actually be an improvement over what LaRoche did for the Sox last season, but it's not great. Also, Morneau only played in 49 games last season. It's entirely possible, and even reasonable to believe, that having Morneau play most of his games as a designated hitter will go a long way in keeping him healthy. It's just, as we all know, players don't get healthier as they age.

If they did, Adam LaRoche might not be retiring.

There's also the fact that Morneau's power has dipped quite a bit since he was the guy we remember mashin' taters for the Twins all those years. While his career home run rate is 3.9%, the last two years that's dropped to 2.7% overall, and 1.9% outside of Coors Field. In other words, if Morneau had 500 plate appearances for the White Sox in 2016 with the same homer rate, he'd finish with like nine or 10.

Oh, and let's not forget that it's March 16. Morneau hasn't been in camp with anybody, so if the Sox sign him today, how long until he's actually ready? When Opening Day is here, will Morneau actually be ready to play? This isn't a huge problem, but it's one you still need to consider.

Finally, Morneau is Canadian. Brett Lawrie is also a Canadian. How many Canadians do we really want? This ain't Canada's national past time we're talking about here!

This isn't as fun, but the truth is while it's not an ideal scenario, the White Sox do have plenty of options already on the team. Instead of having LaRoche as your regular designated hitter and rotating others in against lefties, the Sox could essentially just make the designated hitter spot a total rotation rather than a fixture.

Both Todd Frazier and Alex Avila can serve as backups at first base for Abreu, though Avila at first made a more enticing option before waiving Rob Brantly.

Still, if the Sox just decide to go with what they have and reassess once summer rolls around, they can do it and probably be just fine. The serious downside, however, is that without LaRoche you have no left-handed power.

I hate this option, and I've always hated this option. I'm glad he lost the vote, but there's still a significant portion of Sox fans who believe Jay Bruce is somebody the Sox should give up actual assets for. These people have not actually watched Jay Bruce lately.

Do you really want to allocate all the money you save on LaRoche for a minimal upgrade like Jay Bruce? They're essentially the same player, except Bruce runs into a fastball a bit more often.

I go with Morneau for a few reasons. I think he still has something of value left if he's only facing righties, which is predominantly what the Sox face in the AL Central, and also because he's really cheap.

If he gets hurt, or he doesn't perform, it's not difficult for the Sox to just eat the $3 or $4 million they'll have to give him. They'll also have plenty of money left over from LaRoche leaving to replace him with a trade in the summer if need be.

So go and get Morneau. He gives you a natural first baseman to back up Abreu, another lefty bat, and he doesn't take away from the flexibility of the roster.