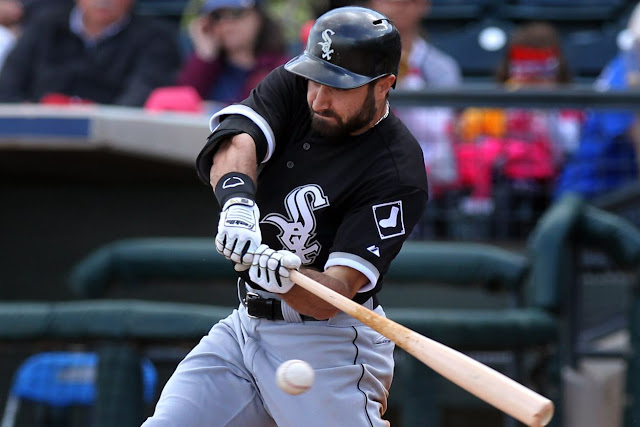 There I was on Wednesday afternoon, watching college basketball and keeping an eye on all the latest in NFL free agency, and on how things are going with Illinois football as Lovie Smith continues to put together a coaching staff. Oh, and I was working too. I promise.

As I was doing this, I began seeing strange things on Twitter. White Sox fans talking about trading for Jay Bruce. This on its own confused me quite a bit because, well, the White Sox just signed Austin Jackson. Adding Jay Bruce at this juncture would seem to be a bit of overkill because you only have three outfield spots to work with, and you already have four outfielders.

So I ventured out to find the source of this hullabaloo, and I was directed to a column by David Haugh. In Haugh's estimation, he believes the White Sox should trade for Bruce, which, fine. I'm not exactly a fan of the idea, but it's not totally crazy in and of itself.

It gets a little crazy, however, when you plan to trade for Jay Bruce so you can do this.


Trading for Bruce to play right field with Jackson in center and Melky Cabrera in left likely would make Eaton a fourth outfielder and part-time designated hitter — perhaps platooning with Avisail Garcia — Eaton's ideal role on a contending Sox team. It also would make Eaton's five-year, $23.5 million contract extension signed a year ago all the more baffling. Bruce offers 30 home-run potential, a capable glove and an expiring contract, which Hahn appears to be collecting.

You want to make Adam Eaton a fourth outfielder and have him platoon at DH with Avisail Garcia? Have you murdered Adam LaRoche in this situation? Like, he's just gone, and so is the money the Sox have to pay him?

If you have, well, thanks. Seriously. You're a hero, but that still doesn't make the plan to demote Adam Eaton sensible in the slightest sense. And his contract is baffling? He's making an average of $4.7 million per year!

THAT'S LESS THAN THEY JUST GAVE AUSTIN JACKSON, WHO COULDN'T FIND A HOME UNTIL MARCH EVEN THOUGH HE HAD NO QUALIFYING OFFER ATTACHED TO HIM.

Oh, and Eaton's been the second-best offensive player on the White Sox the last two years. Maybe you hadn't noticed.

The difference, obviously, is that Abreu hits for more power, but their relative value has been damn near equal when you measure both players for who they are on the whole rather than the dingers.

If the White Sox do end up trading for Jay Bruce, the only deal I'd accept is one that sends LaRoche back to Cincinnati with a prospect, but Cincinnati isn't taking that deal. The Reds want to move Bruce's salary, and LaRoche's money basically breaks even.

But if it does happen, it's not Adam Eaton who you move to a fourth outfielder/platoon DH role. It's Melky Cabrera and Austin Jackson.

You simply don't put your second-best offensive player -- WHOSE CONTRACT IS A GOD DAMN STEAL -- on the bench while you're trying to contend. No matter how many times Jay Bruce might homer.
Adam Eaton Adam LaRoche Austin Jackson Avisail Garcia Jay Bruce Jose Abreu Melky Cabrera