The Value Of J.B. Shuck 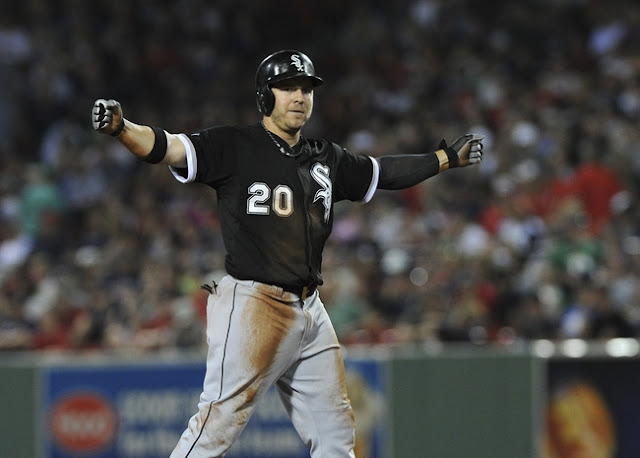 We've only a little more than a week to get through before Opening Day gets here, and as the Sox wind down camp in Glendale, there are still a few roster spots being fought over.

Essentially there are two spots on the bench that are up for grabs with Jerry Sands, Carlos Sanchez, Travis Ishikawa, Matt Davidson and J.B. Shuck fighting for them. In reality, however, I believe there's only one spot open and that there are four people fighting for it.

J.B. Shuck is going to make the team.

I don't say that with inside information, it's just a strong feeling I have. When I look at the way the roster is constructed, I see Shuck as an obvious option for Robin Ventura, or at least an option he thinks is an easy choice.

For the rest of us it probably isn't as clear.

We also see a guy who can play any of the outfield positions, even if he doesn't play any of them particularly well. As is always the case when it comes to defensive metrics, mileage may vary, but what we see over the course of his career is just an ordinary dude with his glove. Using defensive runs saved he's saved four runs total in four seasons, and his UZR is -4.2. Both metrics agree that centerfield is his worst spot, while they disagree on whether he's better in right field or left field.

When we look at all this together we basically peg Jack Burdett Shuck has a living example of The Replacement Player.

Still, he's going to make this team, because he does have actual value to the White Sox.

We'll start with the fact that Shuck hits left-handed, which gives him a major advantage in this race for a roster spot. When Adam LaRoche retired he left the Sox with an extremely right-handed offense in a division dominated by right-handed pitchers.

Which is where Shuck's lefty bat would come in handy, but not as an occasional starter.

You see, if Shuck makes the roster, he'll be a fifth outfielder. With Melky Cabrera, Adam Eaton, Avisail Garcia and Austin Jackson all moving around in the outfield and spending some time at designated hitter, they'll all stay well-rested. The only way Shuck is going to work himself into regular playing time is due to an injury.

Shuck's role, like we saw last season, will mainly be as a pinch-hitter, which may be his greatest asset.

Furthermore, as Hawk Harrelson has informed you a billion times during your lifetime, he doesn't want to know what you hit, but when you hit it.

Well, in his career Shuck has been a .291/.339/.378 hitter from the 7th inning on when facing the best bullpen arms an opponent can offer. According to BRef, in late and close situations (7th or later with the batting team tied, ahead by one, or the tying run at least on deck), Shuck's a .269/.341/.346 hitter. So while he may not be a great hitter overall, Shuck seems to shine late in games when called upon. At least as much as J.B. Shuck can shine, anyway.

We saw plenty of examples of this with Shuck last year, as he served up more than his fair share of big hits as a pinch-hitter or just late in games.

All of which is why I believe J.B. Shuck will make the White Sox roster in 2016.