What You Need To Know About Adam LaRoche Retiring 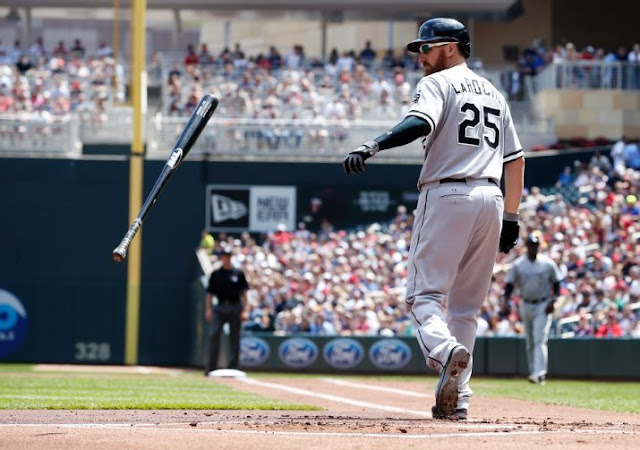 Tuesday afternoon brought quite the surprise.

Adam LaRoche announced his sudden retirement, which typically doesn't happen in mid-March a few weeks before the season begins. Especially when the player retiring is guaranteed $13 million for the upcoming season.

My initial reaction to the news, aside from the surprise, was a happy one. I'd already considered LaRoche a sunk cost before the season began after he was horrible in 2015, and was now a year older, with a bat slightly slower.

But is this really good news? I don't think we can know for sure right now. LaRoche retiring presents some positives, but the timing also introduces a few negatives. Let's try to figure this whole thing out.

WHY DID LAROCHE SUDDENLY RETIRE?

Well, he'd missed the last 10 days with some back trouble. As Joe Crede can attest, having back problems is never good for anybody, let alone a professional athlete. Having back trouble when you're 36-years old like LaRoche is even worse.

Now, if we really think about this, the back pain must be pretty damned severe for LaRoche to walk away from the game entirely. Again, he was guaranteed $13 million in 2016 no matter what happened, as long as he was playing.

So the back problem must be serious, and LaRoche has decided he just doesn't want to deal with it. Better to step away, let the back heal, and spend some time in a deer blind.

I wish him well.

THE TIMING ON THIS SUCKS, RIGHT?

It does. Yes, LaRoche retiring frees up $13 million worth of payroll, but $13 million isn't as useful in March as it would have been in December. Had LaRoche retired following last season, maybe that $13 million is what it takes to land a Yoenis Cespedes or an Alex Gordon. If not them, then maybe Dexter Fowler instead.

Instead the only option you really have right now would be trading for Jay Bruce, but I don't think the White Sox are all that interested in him, with or without LaRoche.

(There's also Justin Morneau, who I forgot exists, and is currently a free agent.)

Realistically, if the Sox are going to spend that $13 million in 2016, it won't be until the trade deadline. Maybe it helps land a Carlos Gonzalez, or another high-priced trade asset this summer.

Aside from the money aspect, though, it's just plain inconvenient to have somebody who was going to break camp with the team just up and retire in March. It throws wrinkles in the plan, some of which are good, and some of which could be problematic.

WELL WHAT ARE THE POSITIVES ABOUT THIS, ASIDE FROM THE MONEY?

It sure gives the White Sox a lot more flexibility with the designated hitter spot. As I talked about when the Sox signed Austin Jackson, it gave Robin Ventura a lot more options with his lineup. While he'll no longer have the chance to put LaRoche in the lineup.

But it will allow him to give all of his outfielders a day off from time to time, which would be good for all involved for different reasons. Adam Eaton may not like DHing, but his body won't mind it over the course of the season from time to time. As for Melky Cabrera and Avisail Garcia, while their bodies will also appreciate occasional rest, the team would be better served to remove their gloves from play as well.

First and foremost, I wonder how this will affect Jose Abreu. LaRoche didn't just serve as a designated hitter, but he was an occasional first baseman as well. Somebody who could take over at first and allow Abreu a day off at DH from time to time.

Who is the backup first baseman on this team now?

But I can't help but believe that had LaRoche announced this last week maybe the White Sox don't put Rob Brantly on waivers. This would have allowed Brantly to break camp with the team as a backup catcher while both Alex Avila and Dioner Navarro received some at bats at DH, as well as putting Avila at first base from time to time.

For somebody like Avila, who has been absolutely abused behind the plate over the years, and has concussion problems, some time at first may have been good for his long-term health.

Second, while LaRoche was horrible last year, there was the chance for a slight bounceback this year. Let's not forget that as horrible as Adam Dunn was in his first season with the White Sox, he bounced back with 41 homers his second season. I wasn't expecting anything like that from LaRoche, but now that he's gone, where is your left-handed power?

You don't have any. Not unless Adam Eaton has another huge power spike.

WHO WILL BENEFIT FROM THIS THE MOST?

Well, if Jerry Sands proves he can play first base, I think LaRoche's retirement now increases his odds of making the roster. Considering how he hits lefties, he'd be a useful spot-starter and pinch-hitter late in games.

Travis Ishikawa could also benefit if he plays well enough this spring, but I don't think that's a direction the Sox really want to go. Ideally he's minor league depth in case of injuries during the season, not a guy you plan on carrying for 162 games.

Other names I believe could benefit from this are Tyler Saladino and Carlos Sanchez. Sanchez seemed pretty blocked by Saladino, Jimmy Rollins and Brett Lawrie, but there's more room for him to maneuver now. Though I still think the Sox would rather have him playing every day in Charlotte than sparingly in Chicago.

I do think Saladino benefits quite a bit, however.

Rollins is going to be your starting shortstop, with Saladino getting occasional starts there, but serving more as Mr. Do-It-All off the bench.

Earlier I mentioned a possible first baseman to back up Abreu. It's not Saladino, but who it could be is Todd Frazier. I can foresee a scenario in which the Sox give Abreu a day at DH, move Frazier (he has played 82 games at first in his career) across the diamond to first, and Saladino gets the start at third.

SO HOW DO WE FEEL ABOUT THIS WHOLE THING NOW?

I don't think it's a great thing for LaRoche to leave now. I just don't.

It's just that I don't think it's a terrible thing, either.

Instead I believe that this will just provide Robin Ventura a lot more options with his lineup on a daily basis, and it gives Rick Hahn more options on what he wants to do with this roster. Having all these options is a good thing!

It's just you have to choose the right ones.