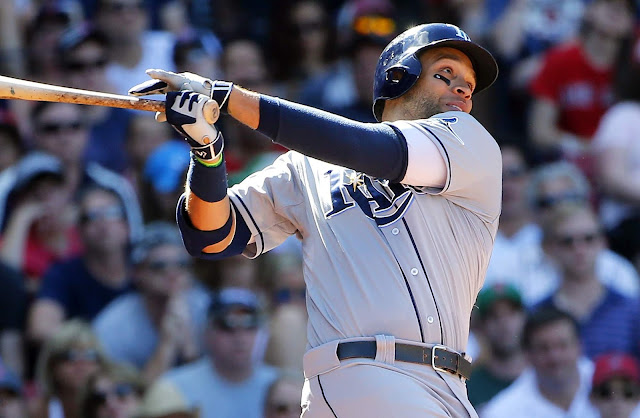 As I write this post the White Sox are playing the Reds in their Cactus League finale. Following the game they'll take tomorrow off before heading to San Diego to play two final games against the Padres before the season begins in Oakland on Monday.

As camp closes, the biggest question remaining is who will win the final roster spot: Travis Ishikawa or Jerry Sands? Carlos Sanchez was already sent to Charlotte, and Robin Ventura has said J.B. Shuck will be on the team.

There may be a new contender in play for that spot, though, following some news out of Tampa Bay Rays camp on Wednesday.

The Rays have told James Loney that he won't be making the roster, and this is something I believe the White Sox should take advantage of.

I've felt that Ishikawa has the edge over Sands because he's a lefty, which the Sox need, and he can play first base, something else the Sox need. Well, James Loney does both of those things as well, and he's just a better player than Ishikawa is.

Ishikawa had a big postseason run for the Giants a few years ago, but his overall career hasn't exactly been spectacular. He's had 1,050 career plate appearances in the Majors, and has hit .255/.321/.391 over that time.

If we take a look at their more recent production, the gap becomes even wider.

When comparing the two, clearly, Loney is the much better option.

Now, he's far from a perfect player, but he makes a ton of sense for the White Sox anyway. Yes, with the loss of LaRoche you lose some potential power from the left side, and Loney isn't going to make up for that. Of course, neither would Ishikawa.

What Loney does do, and does well, however, is put the ball in play. He's not a power guy as his OPS+ in his career is 105. His career high in home runs is 15, and that was all the way back in 2007. His power took a dip last season as well, not just in homers, but in extra-base hits overall, and since he's turning 32 in May, I don't think we could reasonably expect a significant bounce back in 2016.

But the one thing that's remained consistent throughout his career is his strikeout rate. He's struck out in 12% of his career at bats, but that number dipped to a career low 8.8% last season. What makes his dip in power last season more interesting is that, even though he struck out less often than ever before, his line drive rate of 30% was tied for the highest of his career (2013).

Yet his BABIP of .298 was the lowest he's had in four seasons.

So it's entirely possible that Loney just hit into some bad luck last year. His spray charts show that he still hit the ball to all fields.

Which means that a bounce back season isn't entirely out of the question, but even if he just maintains being a guy that hits between .280 and .300 with a respectable OBP, that would be valuable to a White Sox team that could just plain use more bats that put the ball in play.

Adding him to the roster, even at this point of the spring, just makes too much sense for the White Sox in my opinion.