Five Thoughts On That ESPN Story About Adam LaRoche 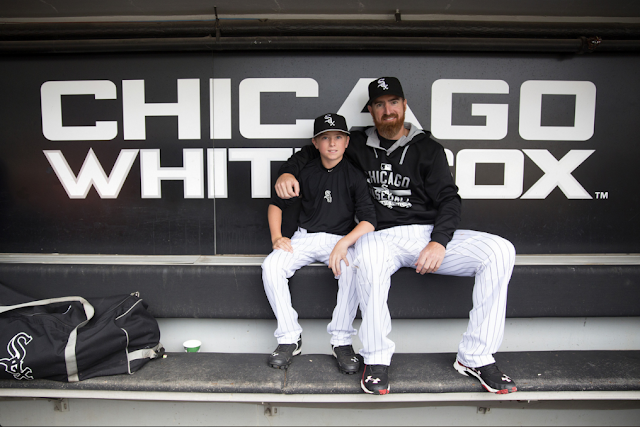 ESPN's Tim Keown wrote about Adam LaRoche and his decision to retire for ESPN The Magazine, and you can read the entire thing here, or you can just read what I have to say about it.

It's the first time LaRoche has spoken about his decision with anybody in the media, and, well, if you thought the entire War of LaRoches was strange, shit gets even weirder in the ESPN puff piece.

Did you know that Adam LaRoche spent part of the offseason going undercover in southeast Asian brothels? What? You don't do that?

Well, Adam LaRoche does. I learned that in the ESPN piece.

That's just one of the highlights, and instead of rehashing the entire thing to you, I'll just go over some of the parts that stood out to me for various reasons while reading it.

1. Adam LaRoche Is Different From Other Athletes, Except He's Exactly The Same

Keown really wants to make you think there's something different about LaRoche, something special. He wants to portray LaRoche as somebody who is better than his colleagues, or it's possible that's how LaRoche wanted to frame himself, and Keown just went with it.

How does Keown establish that LaRoche is different from other players? By pointing out he likes to hunt I guess.


So here's the deal: You need to forget everything you think you know about professional athletes. Adam LaRoche is different. He walked into the clubhouse for the first time every spring and greeted new teammates by saying, "Oh, hey, I didn't know we signed you." During spring training in 2010, with the Diamondbacks, he and his family pulled a trailer to Tucson, and he rode a bicycle from the campground to the ballpark every day. He's one of the stars of the reality TV show Buck Commander, in which he bow-hunts with a couple of ex-ballplayers, two country music singers and one member of the unapologetically redneck Robertson family, they of the Duck Dynasty dynasty. He also owns E3 Meat Co., which is run out of the Kansas ranch that's been in his wife's family for six generations.

All right, so maybe other baseball players pay more attention to the things their team does during the offseason than LaRoche does, but everything else seems pretty basic. I mean, Keown claims that LaRoche being on a reality show about hunting deer makes him different than other players, and then he literally says LaRoche is on the show with two other baseball players in the same sentence.

But, sure, Adam LaRoche is the only American-born baseball player from the country that likes to hunt and has a beard. The other players surely look at him like he's crazy for his deer bloodlust.

2. Adam LaRoche Says He "Gets It," But It Sure Doesn't Seem Like He Does

LaRoche understands the backlash he received, and says he gets it. For a moment or two, you believe him.


"I never took it for granted," he says. "One, I get to play a game. Two, I get paid an absurd amount of money to play a game. Three, I can have my son with me while I'm doing it. I was pinching myself all the time, wondering, 'What did I do to deserve this?' And I always knew it could get shut down at any point. You could have a manager who just flat doesn't like it. You can have players complain -- Hey, we're tired of having a kid around. There's a chance we could have other guys see Drake and think, 'I'll bring my kid too.' Obviously we can't turn this into a day care. I get it."

All of which is very logical, and sensible. The problem is, the very next sentence in the story throws everything LaRoche just said out the window.


But Drake was different, he says: "the exception to the rule."

So, essentially, LaRoche says in one sentence that the clubhouse can't be turned into a daycare, and you can't have kids everywhere. Then the next sentence is "unless it's my kid."

So Adam LaRoche thinks he gets it, but I don't think he gets it at all, and I hope he gets that.

This may be me nitpicking a bit, but this moment just popped out to me while I was reading the piece. Emphasis is mine.


"I'm not saying this is the way everybody should raise their kid," LaRoche says. "I'm saying I was given the privilege to raise my kid this way by some awesome teams and managers and GMs. Can every parent do it? No. But can we spend more time with our kids? Sure. I feel like I've spent as much time with Drake as you can, and if he were to die tomorrow, I guarantee you I'd be looking back and saying I wish I spent more time with him."

If he were to die tomorrow? I'm not a parent, so I don't know how most parents approach the idea of death when it comes to their children. I'm sure the modus operandi is to be terrified of the idea that something could happen to your kid, but when it comes to death, I can't help but think most parents think of the idea of spending time with their children before they die, not the child.

Reading that quote from LaRoche just made me feel weird.

So I mentioned this earlier, and now we're here. It turns out that Adam LaRoche -- as well as Milwaukee Brewers reliever Blaine Boyer -- spent time in southeast Asia going undercover.


Working through a nonprofit called the Exodus Road, LaRoche and Boyer conducted surveillance in brothels and tried to determine the age of the girls -- known only by numbers pinned to bikinis -- and identify their bosses.

"Something huge happened there for us," Boyer says. "You can't explain it. Can't put your finger on it. If you make a wrong move, you're getting tossed off a building. We were in deep, man, but that's the way it needed to be done. Adam and I truly believe God brought us there and said, 'This is what I have for you boys.'"

I really don't know what to say about this. On the one hand, I admire the commitment to the cause. On the other hand, that's a weird way to explain to your wife why you're going to Thailand alone with your friend Blaine.

"What will you be doing in Thailand, honey?"

"Oh, you know, hanging out in brothels."

"Don't get the wrong idea, sweetie, I'm going undercover to help save those girls."

"Ain't you just the sweetest!"

Also, why didn't he bring Drake along for that? Nothing like spending time abroad with your son.

One of the undercurrents to the LaRoche story that I didn't see mentioned very often was that he didn't retire just because of his kid in the clubhouse, but that he'd been thinking about retirement for a while, and the Drake thing was just the final straw.

LaRoche sucked last year, which he admits again in the story, just like he did in his original statement following his retirement. He's talked about how rough the season was for him both during it, and a little afterward.

He mentioned it again when talking about his undercover brothel busting.


As they waited for their plane, LaRoche asked Boyer, "What are we doing? We're going back to play a game for the next eight months?"

They wielded their emotions like crude homemade weapons. Every crazed thought ran through their minds. Quit the game. Sell the house and move here. Give up everything and fight the fight full time.

LaRoche couldn't talk about it for two weeks. It's going on tonight, he thought as he tried to sleep. And here I am, in paradise at the ranch with my kids, where everything's safe.

So he thought about giving up on baseball before the spring, then shortly after reporting to camp he's told by Kenny Williams he needs to "dial back" the amount of time he has Drake with him this season.

He's thinking about missing time with his son after he just spent time in southeast Asia trying to find lost children now working in the sex industry.

I have no doubt that LaRoche cares about his kids and his family. The story drives all of that home a bit further, it's just, Drake LaRoche wasn't the reason Adam LaRoche retired. It wasn't #FamilyFirst. It was #ABunchOfOtherThingsFirst and then #FamilyToo.
Adam LaRoche