Chris Sale Is Different, And Possibly Better Than Ever Before 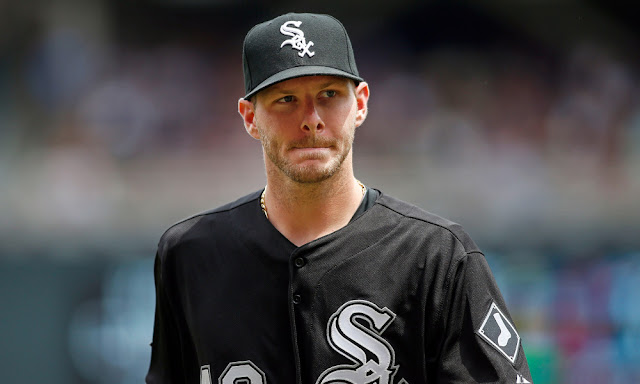 Ordinarily, if you had a starting pitcher whose velocity has dropped significantly during the first month of the season, as well as his K% and K/9, this would be cause for concern. Just ask a Houston Astros fan how they feel about reigning American League Cy Young winner Dallas Keuchel at the moment.

The White Sox have a pitcher whose velocity and strikeout rates have all seen much more significant decreases this season, yet that pitcher could currently be on the way to a career season, only a year after setting a franchise record with 274 strikeouts.

Through five starts this season Chris Sale is 5-0 with a 1.66 ERA and an MLB-best 0.6484 WHIP, yet he's doing things in an entirely different manner than the one we're used to seeing from him.

Last season, while setting the world on fire and striking hitters out at a rate that made guys like Pedro Martinez and Randy Johnson blush, Sale was firing his fastball at an average speed of 94.5 mph. This year it's down to 93.2 mph.

Sale has also seen his K/9 drop down to 7.58, which is far and away the lowest of his career, and well below his career rate of 10.3 heading into the season. He's struck out "only" 23.2% of the hitters he's faced after striking out 32.1% of them last season.

Normally these would represent a lot of red flags, but this is all a deliberate move on Sale's part.

As I mentioned, the velocity on Sale's fastball has not only dropped, but so has its usage. Sale's not only changing how hard he throws his fastball, but how often, and by abandoning the four-seam variety.

This isn't a new thing for Sale, as he basically switched from throwing a four-seam fastball to a two-seam once he became a starter. It's just, over the years, he relied less and less on the four-seamer, but featured it occasionally. Just for fun.

Through his first five starts in 2016, Sale is throwing his fastball more often then ever before, featuring it 59.7% of the time. That's the most often he's used it since he became a full-time starter in 2012 and threw it 60.7% of the time. So roughly 313 of the 525 pitches Sale has thrown this year have been fastballs, but not a single one of them has been a four-seamer.

They've all been two-seamers.

Again, this is for effect. Sale made it known heading into the season that while it's fun to strike everybody the hell out, it makes for some elevated pitch counts that don't allow him to go as deep into games as he wanted to, and this year the goal was to throw less pitches and get into the eighth and ninth inning more often.

By moving exclusively to the two-seamer, and dropping the velocity a bit, Sale is pitching to contact. It's a pitch that dives down and in on lefties, and down and away on righties. Sale wants those hitters swinging at this pitch, and the late movement isn't allowing hitters to make solid contact all that often.

While the hard contact percentage (28%) hitters are making off of Sale is higher than ever before in his career, the line drive rate (15.1%) is the lowest it's been since Sale became a starter. So guys are making hard contact against Sale, they're just beating the ball into the ground, and with an improved defense working behind him, Sale is reaping the benefits.

Hitters have a BABIP of .186 against Sale this season. Compare that to last season when it was .323, or the .289 mark of his career. Now, odds are that BABIP will even out as the season goes on, but when it does, Sale is leaving himself with the chance to adjust yet again.

While he's throwing the fastball more often than he ever has before, we've also seen an increase in Sale's usage of the slider. He's throwing it 23.6% of the time after using it less than 20% of the time the last two seasons.

What he's holding back on is his changeup, which has to be terrifying news for hitters.

Sale's changeup has accounted for only 16.8% of the pitches he's thrown this year. In 2014, when he first became confident in it, he threw it 28.6% of the time. Last year it was 27.7%. Which made sense, because using Pitchf/x pitch values, his changeup was his best pitch each of the last two seasons. Hell, it was one of the best changeups in the American League.

And now he isn't even using it that often because he doesn't have to. Hitters are swinging at that fastball and are pulling it -- 44% of balls put in play against Sale this season have been to the hitter's pull side, the highest rate of Sale's career -- on the ground. Since so many batters Sale faces are righties, that means they're hitting it right to the team's Gold Glove third baseman, Todd Frazier.

This is working out incredibly well for the White Sox so far.

But when it isn't, or at least hitters start figuring things out, Sale can then pull that change up out of his back pocket and make life even more miserable for his opponents.

Should they figure that out too, well, then there's the velocity he's not even using.

In other words, not only is trying to hit Chris Sale a nightmare, but it's one hitters won't be waking up from for quite some time.
Chris Sale