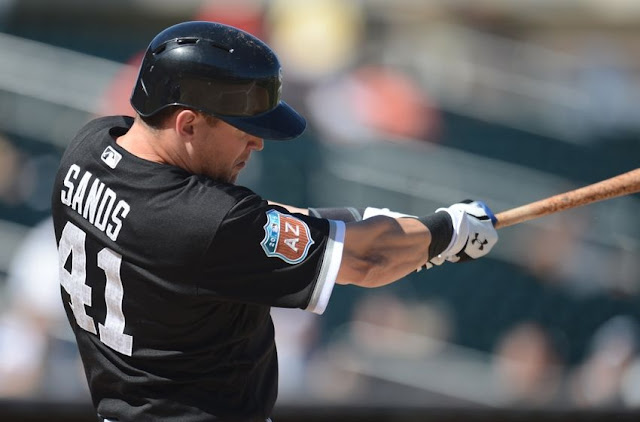 When the White Sox decided to give Jerry Sands the final spot on the roster over either Travis Ishikawa or Matt Davidson, it caught me by surprise. I figured that, following the retirement of Adam LaRoche, Ishikawa would make the most sense.

He's a lefty, and he can play first base to give Abreu a day off, as well as some left field if you really need him too.

Instead the Sox went with Sands, and on Wednesday night, the flaw in their logic was on display.

Robin Ventura was faced with a dilemma, however.

You see, Sands was replacing Avisail Garcia at DH. While Garcia has hit righties better than Sands during his career, he hasn't hit Phil Hughes all that well. He's 1-for-12 with five strikeouts against him in his career.

So Robin went with Sands, even though Sands can't hit righties, because Avisail can't hit Hughes.

Good question. It's because Sands hasn't played yet. On Sunday Sands was scheduled to be in the lineup against Cleveland, but the game was postponed due to rain. That meant that as Wednesday approached, Sands was the only Sox player not to get a start yet this season.

Shuck has started twice, and is hitless in eight plate appearences with a walk.

Sands got his lone at bat of the season during the 7-1 loss to the Indians in the home opener.

So Robin decided to start Sands on Wednesday simply because there haven't been any chances to play him yet, which is precisely why he shouldn't be on the roster in the first place.

Sands is a very weak defender, and can only hit lefties at a competent level. The White Sox play in a division where just about all the left-handed starters are on their own team. Again, last season, the White Sox played 162 games, just like everybody else. Only 36 of those games came against a left-hand starter. Odds are that ratio won't change much in 2016.

So, aside from being a late inning pinch-hitter, Sands is rather useless.

Hopefully having to find ways to wedge him into the lineup will help the front office realize this and do something to change the situation.