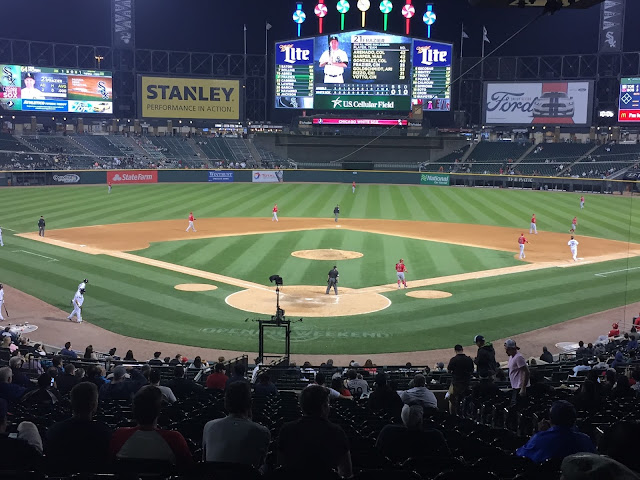 I went to Monday night's game against the Angels, hoping to see an excellent Carlos Rodon start, and maybe the Sox offense break out of its rut. Instead what I saw was Rodon record one out before being pulled after giving up five runs on six hits and two walks.

It sucks more than a little bit when your first game of the season is basically over before the second out is made.

Maybe you could convince yourself that the Sox had plenty of time to work themselves back into the game with some runs, but based on the way they'd been hitting all season, it was unrealistic. Instead they managed three hits on the night, and didn't score a single run.

Still, even while Rodon had a horrible night, I expect that to happen to him from time to time. No matter how amazing he looks in stretches -- and he came into Monday night's game with 10 straight quality starts -- he's going to struggle because he loses his command at times, and he's still a very young pitcher, without a ton of experience, learning his craft.

The offense is my main fear, and it seems most of my time is spent trying to figure out what exactly is wrong with it.

So on Tuesday morning I did some digging, just to get a better idea, and it resulted in a storm of tweets that I'd think should be shared here as well.

So grab a beer, or something stronger, and continue reading.

The Sox also have four qualified hitters striking out over a quarter of the time.

So when you swing at more bad pitches than every body else, and try to pull everything, well, this is what happens.
— Write Sox (@WriteSox) April 19, 2016

Oh, and 60.7% of the pitches Sox hitters see are fastballs. Only four teams see a higher rate.

None of this explains the problem, but it certainly sheds light on what a lot of the problems are. So far this season the Sox offense has been an impatient lot, and one that seems determined to homer its way out of a funk (I think that's what the pull rate indicates) instead of just taking a walk, or flaring a single into right field.

Let's look at the three hits the team had last night.

The first was an Abreu single to right field in the first inning.

Then, hours later, Adam Eaton hit a breaking ball into the right-center gap. I'm not sure if it would count as a hit to his pull side or the middle of the field, I just know that it was the third or fourth time Eaton had swung at Hector Santiago's breaking ball, and it was the first time he got the timing right.

The third was a Jimmy Rollins double that he hit down the first base line and barely kept fair.

So of the three Sox hits, two were to the opposite field, and one was on what may have been a hanger (it looked like one from my vantage point, but I couldn't tell for sure).

If there's anything I'm stressing to these guys going into tonight's game against Matt Shoemaker it's that, even if Shoemaker only has a low-90s fastball, take that shit up the middle or the other way. Don't try to fix the entire team's funk on every single swing.

It sounds cliche, but one of the reasons it became a cliche is that it's worked time and time again over the last century plus of baseball.
Adam Eaton Carlos Rodon Jimmy Rollins Jose Abreu