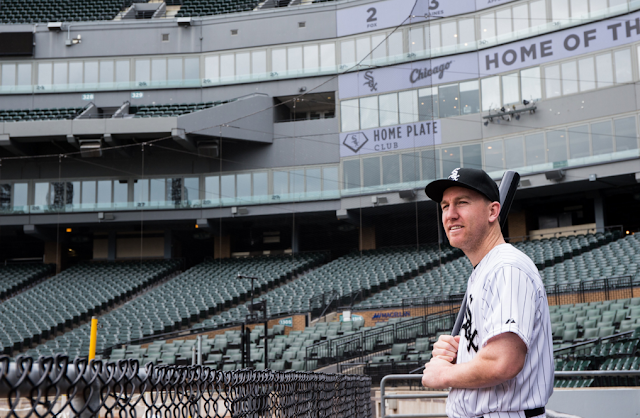 I don't know if anybody has told you, but it's Opening Day. That's right, tonight at 9pm Chicago time, the 2016 White Sox season will begin as Chris Sale and the White Sox take on Sonny Gray and the Oakland Athletics.

It'll be the first of 162 games, and as fans always do on Opening Day, we'll overreact to every single thing we see. Inside we'll all know that nothing that happens tonight -- unless it's a major injury -- is going to have a meaningful impact on the entire season, but we react that way regardless. It's just more fun.

The truth is we don't know what the next six months are going to bring.

That's not going to stop me from making fearless predictions about this season, though, so let us look the future right in the face and tell it what's going to happen.

1. Todd Frazier Will Not Succumb To The Major Offseason Acquisition Curse

It happens too damned often lately. Whether it's Adam Dunn, or Jeff Samardzija, or even Adam LaRoche, no matter who the Sox acquire over the winter, it seems that player is doomed to suck during his first season with the White Sox.

It won't happen to Todd Frazier, though. He's going to deliver on the promise.

He's also going to play excellent defense at third, and prove to be one of the more popular shirseys around the park this season.

2. Avisail Garcia Will Be League Average

Depending on your perspective, that could be a good or a bad thing. It'd certainly be an improvement on last season! In 2015 Avisail was worth -0.3 bWAR and -1.1 fWAR, so a year in which he'e exactly league average would be improvement.

The problem is, if Avisail is going to be getting a lot of playing time this season, and the White Sox want to be contenders, they'll probably need him to be a little better than that. Not so much an All Star, but at least a positive contributor to the team.

It's just not going to happen. He won't be a dumpster fire, but he won't be anything worth investing a lot of time in, either.

3. The White Sox Will Make A Major Trade This Summer

This kind of falls in line with the prediction for Avisail. I don't know who the Sox will get, but as the trade deadline approaches, the White Sox will still be contending for a wild card spot (BONUS PREDICTION: the Royals run away with the Central again). With some money in the bank thanks to Adam LaRoche, and with Jerry Reinsdorf's competitive juices flowing yet again, Rick Hahn will swing a major move.

Whatever the deal is, it will be one of the bigger trades of the season, and whether it works or not will decide whether or not this plan worked, or if this team decides it's time to tear it all down and start over again.

4. Carlos Rodon Will Not Ascend To The Level Of Aces

Carlos Rodon certainly has the potential to be a top-of-the-rotation starter. I believe he will be one at some point in his career, and at some point soon. I just don't think it will be this year.

Sure, if Rodon becomes an ace, having him at the top of the Sox rotation with Chris Sale and Jose Quintana would make this team a real threat should it reach the postseason, but it won't happen this year. While Sale and Quintana will be Sale and Quintana, Rodon will be a lot like the guy we saw last year.

5. The White Sox Will Have A Winning Record

But they aren't going to make the playoffs.

My official prediction for the season is 83-79, good enough to be tied for second place in the AL Central with the Cleveland Indians. While they'll contend for a wild card spot throughout the second half, they'll fall short of that goal, with us heading into the last week or two knowing a playoff berth is unrealistic.

Still, it will be a good season. The kind of season that, even if it didn't end up in a playoff berth, keeps Rick Hahn and company from tearing it all down, and we'll head into the winter with the same core we had in 2016, but knowing that Carlos Rodon is on the verge, and we have a lot more money to maneuver with heading into 2017.