Do You Believe In Avisail Garcia? 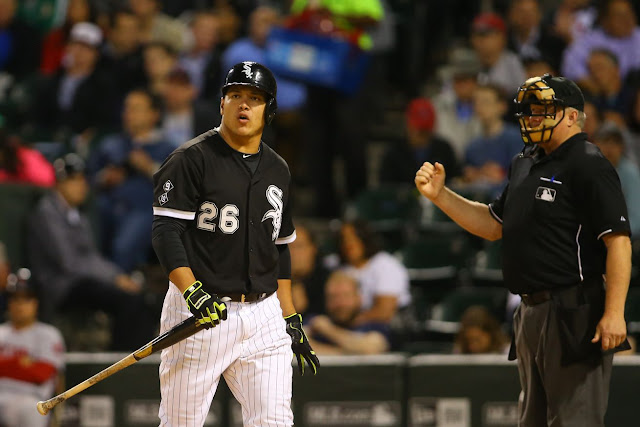 That's why we heard rumors of the Sox being connected to outfielders such as Alex Gordon, Yoenis Cespedes and Justin Upton in free agency. That's why they signed Austin Jackson. That's why, even before LaRoche retired, we heard trade rumors about Jay Bruce.

While they wouldn't say so publicly, all the actions the White Sox took this winter spoke for them, and they made it clear that, in a perfect world, the White Sox wouldn't be giving Avisail Garcia nearly as many at bats this season. They didn't want him to play a major role. Ideally he'd be a fourth outfielder, and a platoon partner with LaRoche at designated hitter.

But then LaRoche retired, and the Sox didn't have many other options, and that's why Garcia has started 23 of 31 games (21 at DH).

There's been another unexpected turn in this story too, and it's that, while his overall numbers aren't great, Garcia has actually resembled a Major League Baseball player in recent weeks.

At the end of the last White Sox homestand against the Angels and Rangers, Garcia was mired in a slump that had seen him go 1-for-23 with 10 strikeouts. His slash line had dropped to .135/.224/.269. It certainly looked like Garcia was living up to my expectations, as well as that of the team.

Sox fans were spending all their time trying to figure out who the team could trade for to replace him. Maybe with the Reds being off to a bad start, the asking price for Jay Bruce would come down?

Then the Sox hit the road, and things turned around for Garcia.

In the first five games of the trip against Toronto and Baltimore, Garcia went 8-for-18 with as many walks (two) as strikeouts. He was even showing some power, with a home run, a triple and a double. But then Garcia's hamstring started barking, and he would miss five games.

He hasn't missed a beat since his return, though.

Now, you shouldn't expect these trends to continue throughout the entire season. If Garcia finishes the season better than Abreu in these categories, something either went incredibly right or horrifically wrong.

The question that needs to be answered is whether or not Garcia has actually improved, or whether this is just a hot streak that will soon end, and he'll fade back to his typical performance.

The perception of him among White Sox fans has certainly changed a bit. If I would have run this poll two weeks ago I'm sure the results would have been a lot different.


Do you believe in Avisail Garcia? Is he giving you some reason to?

Well, while he's certainly hot at the moment, looking at his overall numbers, there are some indicators that we could be seeing a changed man.

Last season he swung at 45.1% of the pitches he saw that were outside the strike zone. He's only doing that 34.9% of the time this year.

While his line drive rate is down, Garcia is also pulling the ball more than ever before, and hitting less ground balls than ever before. He's also making harder contact than he has at any other point in his career.

So there are certainly signs that Avi has turned a corner, but at the same time, a lot of these numbers could be the byproduct of a good couple of weeks. The sample size we're dealing with here is still small.

Once again wondering whether this early season Avisail is the real thing or just a mirage.