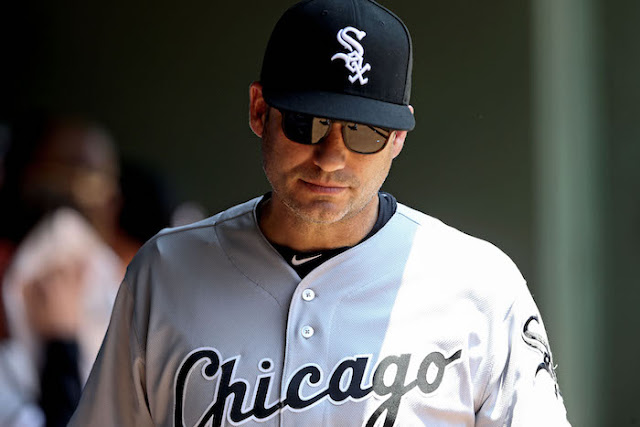 Robin Ventura is not a good manager.

This is generally not just a very common opinion amongst baseball fans within the city of Chicago, or even across the country. It's almost accepted as a fact at this point. Go ahead, ask somebody you know who follows baseball closely if they believe Ventura is a good manager.

When it comes to the tangible aspects of being the guy in charge, the things we can see and judge, there aren't many people in Ventura's corner when it comes to his decisions. Maybe he really does light up a room with his presence, and maybe his players adore him, but all that adoration hasn't done enough to keep him from having a record of 324-376 as a manager.

So it's no surprise that many White Sox fans would like Robin to go back to being former White Sox great and lose his role of current White Sox manager. I know I feel that way, and if you're reading this, the odds are you agree with me.

Of course, when you voice this opinion, it's only a matter of time before somebody responds with "firing the manager won't solve your problems" or "it's not the manager's fault the players aren't hitting/pitching."

Well, no shit. Thanks for pointing it out.

Steve Rosenbloom took to the Tribune to voice this side of the debate on Tuesday.

Firing Ventura is the easy move, but it won’t make a difference long-term to the White Sox, and here’s why.

Rosenbloom then goes on to detail all things Ventura has been bad at, particularly over the last week, in his defense of him. It's an odd strategy at best, but I respect the effort,

And it's besides the point.

There's nobody out there saying "if the Sox fire Robin Ventura, they'll win the World Series!"

Those of us who want Ventura gone realize that firing him won't send Jose Abreu on a home run tear, or ignite the entire offense, and turn every arm in the bullpen into Mariano Rivera. We're not fucking idiots.

But just because firing Robin won't fix everything doesn't mean he should get to keep his job. He's one of the problems that can be fixed right now.

We were all very lucky to get the start to the season the White Sox gave us. I believe that, by and large, the Sox fan base entered the 2016 season with realistic expectations. They played in a winnable division, and maybe if things broke their way, they'd compete for it. The most optimistic predictions I heard from fans about this team back in March generally centered around 85 wins.

The excellent start raised expectations a bit, but even then, the majority of the fan base, at least the members of it I deal with on a regular basis, were somewhat trepidatious. We knew the slump was coming because, if you look at the roster, this is far from what anybody would consider an amazing team.

Jerry Sands and Avisail Garcia were still serving as your designated hitters.

Jimmy Rollins was still dragging his ancient ass out to short most days.

After finally getting rid of John Danks, 40% of the rotation was still Mat Latos and Miguel Gonzalez.

We weren't exactly thinking this team was going to win 110 games.

The only thing that changed was we believed the modest expectations that seemed optimistic in March were suddenly a lot more realistic. That's it.

Then the last few weeks came, and the other shoe dropped. The division lead disappeared. The bullpen that had been amazing, came crashing back to earth. Jose Abreu would go in and out of slumps, but he never burst out of them with home runs, instead using singles to right field.

The flaws we saw before the season showed up.

You can't just turn over your entire roster during the season and start over, though. You can sit back and hope that Rick Hahn finds ways to plug the holes and keep this team afloat in what is still a very winnable division.

But when you have 99 problems, and your manager is one, there is an easy way to solve at least one of those problems. Shit, even if it's for no other reason than to appease a fan base that you have a hard time convincing to support you, and is just growing angrier by the sacrifice bunt attempt.

When you have a team with such little margin for error, you simply cannot afford to have a manager who makes as many tactical mistakes as Robin Ventura does.

Yes, Ventura's players are failing him a lot more often than they should be, but for the last five years, Robin has time and again failed to put his players in a position to succeed.

Todd Frazier did pop out with runners on second and third yesterday, but before that, Ventura had Melky Cabrera -- his No. 3 hitter, and the only guy in his lineup who hasn't had a prolonged slump this season -- bunt those runners over there, giving up an out.

This was a man who just saw his bullpen blow a four-run lead, a six-run lead and a two-run lead in successive days, and he decided to play for a 1-0 lead rather than looking for a big inning that could wake his offense up.