Danks For The Memories 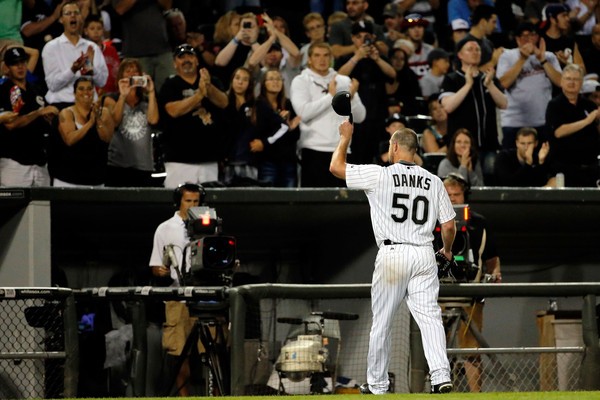 John Danks has been shitcanned.

I think we all knew it was coming, as I wrote about the possibility just yesterday, but I was still startled by the news when I heard it on Tuesday afternoon. I truly thought Danks would get one more start on Wednesday against the Red Sox, and if he continued to pitch like he had been all season, that would finally be The End.

As somebody who probably cares about the White Sox more than he should, and is currently watching a team that has a chance to win the division this year, and finally get back to the playoffs, I was thrilled. This team already has enough flaws, and sending Danks out there every five games to be emasculated in front of thousands, while his teammates strained their necks watching balls fly all over the park was a flaw I was certainly tired of seeing.

But then there's the human being in me. The one that actually feels bad for John Danks, who worked so hard to come back from a bad shoulder injury and at least try to reclaim something of what he once was. He just never could, no matter how hard he tried.

And that has to suck.

I don't consider myself a great writer by any stretch of the imagination, but at least I know how to put words together in coherent sentences well enough to make a living doing it. I have the ability to put my thoughts down and try to convey them in a manner in which others understand, and possibly even enjoy.

If I suddenly forgot how to do it tomorrow, and then spent the next few years trying to reclaim the ability, only to run into road block after road block, never able to do so again, it might drive me mad. Particularly if there were thousands of people telling me I suck constantly, and loudly booing me for not being what I once was.

We forget all too easily that, just because John Danks sucked the last few years, it's not like he was going to the park every day trying to be bad. It's not like he woke up in the morning and said "today I'm going to do everything I can to make Sox fans even angrier about my contract." I'm guessing there was never anybody as frustrated as John Danks was about how badly Danks was performing.

That's because Danks remembers what he was, and what he thought he could be, even if a lot of us forgot.

There's a reason the White Sox chose to let Mark Buehrle walk and instead invest in Danks.

When Danks first joined the Sox in 2007, he had the struggles that you'd expect of any 22-year old starting pitcher facing Major Leaguers for the first time, but you saw the potential there. He lived up to it the next four seasons, posting a 3.77 ERA (19% better than the league average) over 778.2 innings, reaching 200 innings in both 2009 and 2010. He was worth 18.8 bWAR in those four seasons.

He was good. Good enough to warrant that five-year, $65 million deal. Let's not forget which franchise this is we're talking about here. Jerry Reinsdorf has never been the kind of guy to hand out contracts like that, especially to pitchers, but he gave one to Danks. That alone should serve as a reminder to how good Danks had been at the time.

Then Danks' shoulder blew up. That's what shoulders and elbows tend to do to pitchers, even if we've been extremely lucky as White Sox fans due to whatever magic Herm Schneider knows.

It may have taken five years to finish the job, but that shoulder was the beginning of the end of John Danks with the White Sox.

Awful enough that the same man who rarely gives out big contracts to pitchers did something else that he rarely does: he ate the remaining money on Danks contract just to put him out to pasture.

And while many Sox fans will always remember Danks for the Blackout Game against the Twins in the one-game playoff after the 2008 season, it's unfortunate that his ultimate legacy will probably be the last five seasons.

It's not fair, but then again, nothing about John Danks -- be it for him personally, the White Sox, or the fans -- ever has been.
Jerry Reinsdorf John Danks Mark Buehrle