Robin Ventura And Not Knowing When To Say When 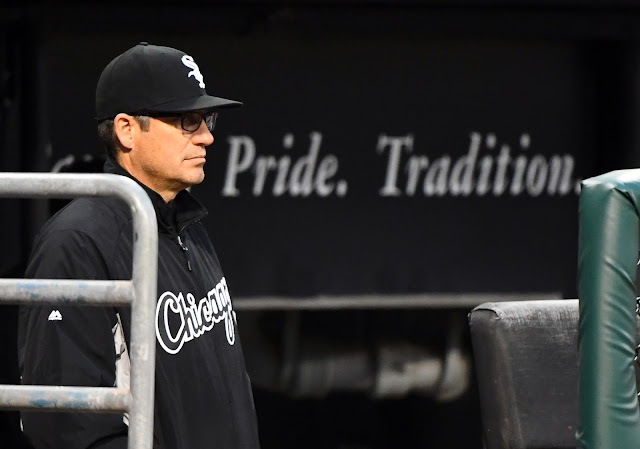 I'm done with Robin Ventura as White Sox manager, but I'm not going to write a screed about why I think he should be fired. Just know that I don't think he's a good manager, and I'd take Rick Renteria or a host of other options over him right now.

I don't know how many games good managers can win for a team in any given season, but I know bad managers can help lose quite a few, and Robin has certainly contributed more than his fair share of losses, with last night serving as another example.

Miguel Gonzalez was cruising last night, just like he cruised in his last start against the Royals. In his first start against KC, Gonzalez had gotten through five innings with seven strikeouts, allowing only a run, but he had worked his pitch count up. So following the fifth inning, I tweeted this.

He’s pitched well but I’m getting it on record that I’m terrified of leaving Gonzalez out there another inning.
— Write Sox (@WriteSox) May 21, 2016

You see, while his pitch count was up there, the larger concern for me was that the Royals were going through their order for the third time, and starting pitchers tend to get easier to hit the more times a batter sees them. Even Chris Sale's easier to deal with in your third at bat. Miguel Gonzalez is no different.

But Ventura sent Gonzalez out there for the sixth inning, and Lorenzo Cain would hit a solo shot to give the Royals a 2-1 lead. Ned Yost would then go to his bullpen to close things out, and the Royals would beat the White Sox 2-1.

Miguel Gonzalez started against the Royals on Friday night, and he again performed better than it seems like he has any right to. Gonzo was cruising through six innings, with a pitch count in the 70s, and had already faced Kansas City's first through sixth hitters a third time, but Eric Hosmer had homered in the sixth to cut the Sox lead to 5-2. So even with the low pitch count, I thought that Robin had already pushed his luck enough, and tweeted this.

Gonzalez started the inning, and though he retired the lead-off hitter, he then gave up a double. Ventura then pulled him for Dan Jennings who walked the only batter he faced, then in came Matt Albers, who gave up a couple of soft singles and the next thing you know a 5-2 lead had become a 6-5 deficit.

Now, it's entirely possible that had Matt Albers started the seventh inning, the bullpen still blows the lead. We have no idea. Albers hasn't exactly been good as of late. But a manager's job is to put his players in a position to succeed, and Robin showed that he has no grasp of common sense when it comes to running his bullpen.

If my dumb ass is sitting at home on a couch, and I realize that Gonzalez should be out of the game, you'd like to think the guy who is actually in charge of making the decisions knows this as well, but Robin has shown time and time again he has no clue.

Ventura has a lot of weaknesses as a manager, perhaps none bigger than his long leash with his starters. He'd rather leave them in too long then go to the bullpen early and have them blow it. I guess he figures he looks even worse with the latter.

While it isn't a perfect indicator of his unwillingness to remove starters, I think a nice sample of what I'm talking about is that opposing hitters have come up to the plate to face a White Sox starting pitcher for a third time 357 times this season.

The only teams to allow their starters to face a hitter a third time more often are the Blue Jays (398), Nationals (380) and Giants (368). Now, while those teams have faced more, all three have allowed an OPS lower than the White Sox' .716 in such a situation.

To further demonstrate how drastically things change in these situations, let's look at some other numbers.

When Sox starters face a lineup for the third time or later the K rate drops, but only down to 20%, and the walk rate remains at 7.9%. What changes drastically is the kind of contact the pitchers give up, as the extra-base hit rate rises to 8.2% and the home run rate jumps to 4.2%.

Now let's compare that to how the bullpen does the first time they face a hitter. In that situation the K rate spikes to 21.2%, the walk rate also jumps big time to 10.2%, but the extra-base hit rate is only 5.2% and the home run rate is 1.5%.

So, even if you aren't going to David Robertson or Nate Jones, most of the time any member of your bullpen is a better option than your starter the third time through the order.

Now, this isn't a universal rule. Guys like Chris Sale and Jose Quintana have earned the benefit of the doubt, and deserve a longer leash, but they aren't immune.

In his career opponents have an OPS of .583 against Sale the first time they face him, but that number climbs to .611 the second time and .661 the third. Things aren't different for Quintana, as the OPS against him rises from .669 the first time through to .687 the second and .744 the third.

Still, as your two studs, I'm fine with giving them the benefit of the doubt.

But when it comes to guys like Mat Latos, Carlos Rodon and Miguel Gonzalez? When you just let the pitch count dictate how you handle them and ignore the times through the order penalty you're essentially just dousing yourself in gasoline and handing the other team a book of matches.

It's burned Robin time and time again, yet we're into his fifth season doing this, and he still doesn't seem to understand what the problem is.