What You Need To Know About The Anthony Ranaudo Trade 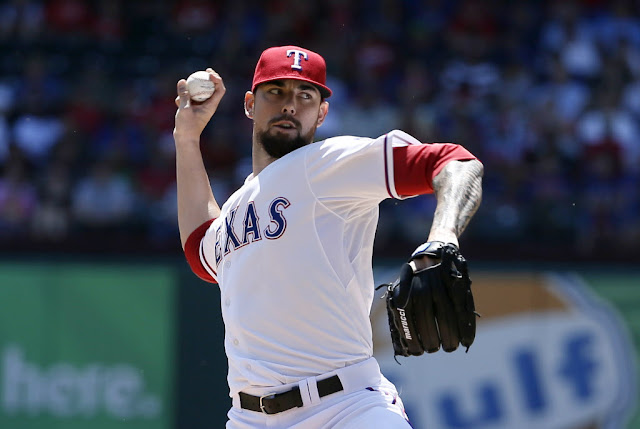 The White Sox made a huge trade on Thursday, and by huge trade I mean they made a small trade featuring players you may never have heard of, or who may not ultimately matter to the White Sox this season.

The Sox got Anthony Ranaudo from Texas in exchange for Matt Ball.

Ranaudo was immediately optioned to Charlotte, as was Scott Carroll.

So what do you need to know about this epic blockbuster deal that will surely change the face of not only the White Sox season, but baseball as we know it? Let's figure it out together.

WHO IS ANTHONY RANAUDO?

Ranaudo's name may ring a bell for you due to a couple of different reasons. The most recent time you heard his name was just a few days ago when he was pitching against the White Sox in Texas. Ranaudo came on in relief of Derek Holland after Holland had allowed five runs in 2.1 innings. All Ranaudo did during his inning and a third was not give up a hit. Sure, he walked five guys, and each one of them came around to score, but he did not give up a hit!

The White Sox must have been big fans of his no-hit stuff.

The Rangers traded for him in January of 2015, getting him from the Red Sox for Robbie Ross, and that may be why you've heard of Ranaudo. He was one of those Red Sox prospects you always here so much about. You know, the ones that are all great all the time.

While he was clearly acceptable in the minors, his stuff has had trouble translating to the bigs because his fastball typically hovers around 91 mph, and he hasn't been very effective with either of his breaking balls (slider and curve) or with his changeup.

SO THEN WHY DID THE WHITE SOX WANT HIM?

I can't say for sure. While they sure haven't been bashful about taking whatever pitching depth they can these days, Ranaudo hasn't been very good on the Major League level. Then again, maybe while they watched him walk five guys on Tuesday night, they saw something they liked.

Maybe this is another one of those Don Cooper projects where he believes a few simple changes -- maybe turn that slider into a cutter? -- can make Ranaudo an effective bullpen arm if nothing else, or even a back-of-the-rotation starter.

I don't know. They clearly see something, though.

OKAY, SO WHAT ABOUT THE GUY WE GAVE UP FOR HIM?

That would be Matt Ball. Like you, I don't know a ton about him. What I do know is that he was an 11th round pick in the 2013 draft out of high school. He spent the previous three seasons in rookie ball, and this year Ball was spending time in Kannapolis.

Though he started 28 games for Great Falls in the Pioneer League the last two years, he was working exclusively as a reliever with the Intimidators this year. In his 10 appearances he'd allowed eight runs in 16 innings, which isn't good, but he also struck out 24, which is pretty good. I'm guessing that 13.5 K/9 rate is what the Rangers saw from Ball that they like, and maybe they think they can make a useful reliever out of him.

SO IF HE COULD BE USEFUL, WHY WOULD WE GIVE HIM UP FOR A GUY WHO SEEMS TO SUCK?

Again, this has to be a case of Don Cooper Thinks He Can Fix Him. The Sox are willing to give up on a guy who maybe could be a useful reliever one day for a guy they believe can be a useful reliever sooner, and maybe even a starter. Also, Ranaudo has a better "pedigree" than Ball does as well.

Very observant of you! Yes, it does, and the Sox say they'll announce a corresponding move before tomorrow's game against the Yankees. What it will be, I don't know.

My guess is Daniel Webb, but Webb is currently on the disabled list, and won't be eligible to return until Saturday. Still, I think the plan will just be to go a man short in the pen on Friday night and then activate Webb on Saturday.
Anthony Ranaudo Daniel Webb Don Cooper Matt Ball Scott Carroll