Can The White Sox Even Make A Big Move? 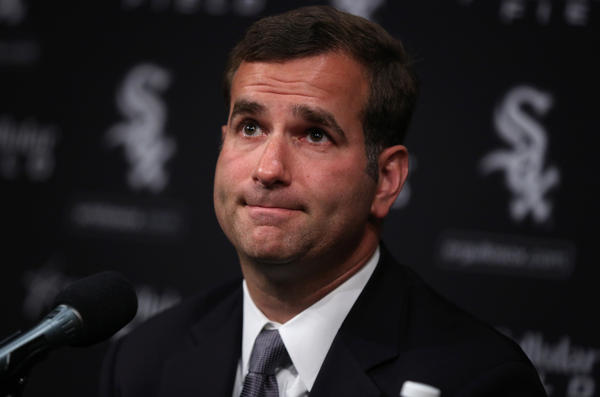 Rick Hahn raised some eyebrows on Tuesday afternoon when he told the huddled masses of media members surrounding him and his blue blazer in the Sox dugout that he was ready to make "a big move."

"We're prepared to make a big move today," said Hahn. "We're having dialogue right now hoping that something comes together.

"Unfortunately, our timing might not line up with the other 29 clubs just yet."

It was music to many an ear, including mine, because it's nice to know that the front office realizes, good start to the season or not, this Sox roster is far from a finished product. The White Sox are a like an old Toyota that's still in good enough condition, but just because you're comfortable driving it around town and back-and-forth to work doesn't mean you trust the thing to get you across the country.

So when you hear that Rick Hahn is out here looking to get you a brand new car, you get excited.

After the initial adrenaline rush, however, the question that kept creeping into my mind was "can the White Sox make a big move if they want to?" Not in the sense that other teams aren't ready to make moves yet, but in the capability.

I'll put aside what exactly constitutes a "big move." To Rick Hahn a big move might be a middle-of-the-rotation starter or a serviceable veteran bat to put in the lineup. For fans a big move is probably a player they've heard of before, who was an All Star once, and now has a giant contract.

The player that counts as a big move isn't what matters. It's what do the White Sox have to give up in order to make it.

For the past few years Rick Hahn has stressed the importance of restocking a farm system that was rather barren when he took over, thanks to the free-wheeling ways of his predecessor. He's done a decent job of it, but as things stand, Tim Anderson and Carson Fulmer are the only two parts of the farm system you would consider top prospects. Guys like Spencer Adams are nice, as is Trey Michalhoweverthehellyouspellit.

But they aren't the marquee names.

They won't be the first names out of every other general manager's mouth when Rick Hahn opens trade talks.

Are the White Sox really willing to get rid of either of them in a trade? Let's not forget that the Sox were apprehensive about going after free agents this winter that would have cost them their comp pick at the end of the first round in June's draft. They are clearly still concerned about the farm system, which is why I have my doubts about what kind of moves the Sox would actually be willing to make right now.

On the other hand, there's also a chance that the Sox having three picks in the first 49 of this summer's draft may make them a bit more willing to part with a Fulmer or Anderson. The thought process might be we lose one of them now, but we'll replenish the system in June anyway.

So if that's the case, maybe Fulmer or Anderson are moved.

What I believe further complicates that picture, though, is that Anderson might be a guy that could help the Sox in 2016. Between Jimmy Rollins and Tyler Saladino, the White Sox aren't exactly getting a ton of offensive production out of the shortstop position. While I have serious concerns about Anderson's glove, the Sox may decide at some point soon his bat would be a boost to the offense.

Then there's Carson Fulmer. I believe Fulmer needs a lot of work. Considering he's walked 26 batters in 39.2 innings at Birmingham, I also believe I'm correct. He's not Chris Sale or Carlos Rodon in the sense that it's reasonable to believe he can come up and be a starter for you this season, but it's possible he could help out in the bullpen.

When it comes down to it, while the Sox may be ready to make a big move if it comes along, I think the big move will have to be on their terms. Instead think more along the lines of the Todd Frazier trade.

The Sox got an All Star to vastly improve the third base position by giving up Micah Johnson, Frankie Montas and Trayce Thompson (miss u). Those are three prospects, but while they may prove to be useful Major Leaguers, they weren't considered the top guys in your system like Anderson and Fulmer are.

So if the Sox are going to make a big move, they're far more likely to look to take the quantity route in terms of prospect price, not quality.

It's just I don't know if that'll be enough for other teams. Let's not forget, the Reds weren't interested in the prospects the Sox gave up for Frazier. Hahn needed the Dodgers to get involved to make that happen.
Carson Fulmer Jimmy Rollins Rick Hahn Spencer Adams Tim Anderson Todd Frazier Tyler Saladino