On Those James Shields Rumors 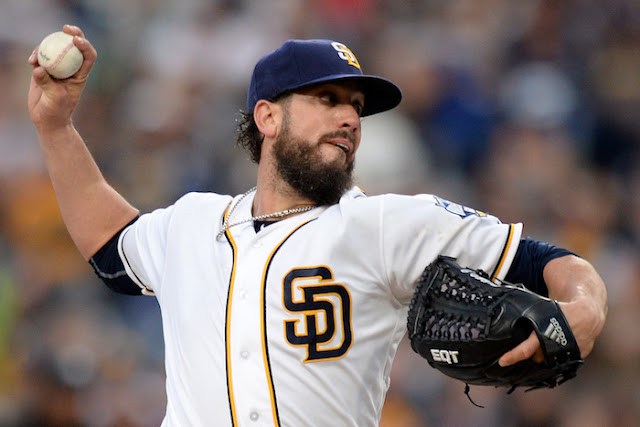 We have our first real trade rumor of the season!

According to Dennis Lin of the San Diego Union Tribune, the White Sox and Padres talking trade, with James Shields being the main target of the deal. Lin writes that it isn't clear whether anything is imminent, but that the talks have "significant momentum."

Now, I have a whole lot of conflicted feelings about this idea, and it's hard to really judge a potential James Shields trade without knowing the parameters.

What we do know is that Shields is off to a decent start for the Padres this season, posting an ERA of 3.06 and a FIP of 3.87 in 64.2 innings for the Padres so far. We also know that, as has been the case for Shields since he left Tampa Bay, his velocity is down this year. In 2013 during his first season with the Royals, the average velocity on a Shields fastball was 92.2 according to Pitchf/x. It's dipped incrementally each year since, and it now sits at 90.2 in 2016, yet Shields has still been rather effective.

What he's lacking in fastball velocity he's making up for with his curveball and a changeup that's always been good. Also, after seeing his home run rate jump to an extreme 3.8% last season, that number is back down to 2.7% this season, which is more in line with his career rates. That would likely change with a move from PetCo and the National League to The Cell, but it isn't horrible.

What we also know about Shields is that he signed a big contract with the Padres before last season, and he's in the second year of a deal that sees him making $21 million this year, as well as in 2017 and 2018. There's a team option for $16 million in 2019 that features a $2 million buyout, and there's also an option for Shields to opt-out after this season if he wants to.

He won't, but the option is there nonetheless.

Anyway, while I like the idea of putting Shields in the middle of the rotation behind Chris Sale and Jose Quintana, that contract is troublesome. While I believe Shields could be a big boost in 2016, I don't know that I want to pay him $42 million for the next two seasons.

He turned 34 in December, after all. He's not exactly a young arm.

So I would imagine that San Diego is picking up some of the tab, and the amount San Diego picks up would have a large impact in how I feel about any deal.

As for what players the Sox would give up? Well, this tweet from Keith Law is concerning.

I heard about ten days ago that Tim Anderson was "available" for a mid-rotation starter. This would fit. https://t.co/2gdhwbcDHd
— keithlaw (@keithlaw) May 28, 2016

Listen, unless San Diego is picking up roughly 80% of the money still owed to Shields, I don't see the Sox giving up Tim Anderson for a third starter. It just doesn't make a lot of sense. I could see them parting with Carson Fulmer for him, but Anderson is a bit much because given the current situation at shortstop, the Sox could actually use Anderson in 2016.

So I'm not going to worry about it too much, but the fact Law is saying he's heard that does scare me a little. I can't lie.

Whether this deal happens or not, it's nice to know the Sox really are out there trying to do something to improve this team. They definitely need another starter, need another bat, and could use another arm or two for the bullpen.

How many things off that list they'll get, well, with actual rumors here, we may not have to wait all that long to find out.
Carson Fulmer Chris Sale James Shields Jose Quintana Tim Anderson