M&M's Guy Has Betrayed You

White Sox fans have taken a lot of shit over the years. Tune into any typical White Sox home game on television, and you're bound to see plenty of empty seats.

It's led to attendance shaming by both the organization at times, and especially from the media.

You need to be told that you are a Bad Fan. You are not like the Good Fans on the other side of town, who for years forked over a bunch of their personal money to watch the Good Team no matter how shitty they were.

If you, the Bad Fan, cared as much about your Bad Team as the Good Fan does theirs, the Bad Team would be a Better Team.

Through it all, though, there was always one man. One hero that the White Sox and the White Sox faithful could depend on. No matter the team's record, no matter the day of the week, you would find him sitting behind home plate in his bright, yellow M&M's jacket. It didn't matter if it was 95 degrees, M&M's guy would be there, sweating his ass off in support of the White Sox.

As sure as the sun rising in the east, you could depend on M&M's man to be there for the team. He was the most loyal White Sox fan on the planet.

And I say he was for a reason, for Monday night brought the first sign of the White Sox apocalypse. 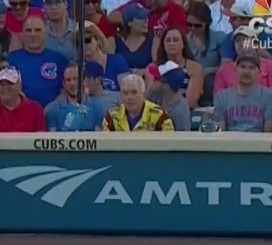 Good god, things are worse than I thought. If M&M's guy could forsake the White Sox in such a fashion, then there clearly is no hope.

We are all doomed to be the Bad Fan, rooting for the Bad Team.

The only escape is death.
Betrayal