What You Need To Know About Tim Anderson Being Called Up 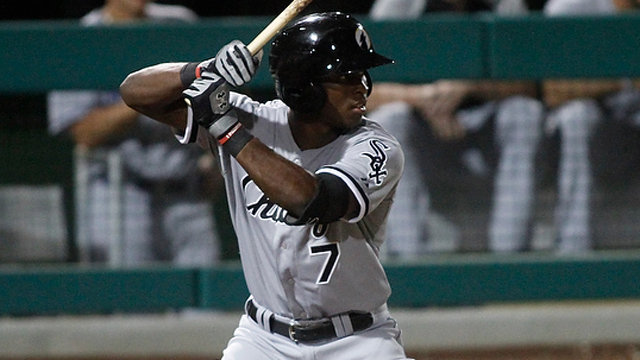 The day is finally here. I know that personally I had been hoping that Tim Anderson would get to spend the entire 2016 season in Charlotte, refining his approach and working on his glove, but inside I knew that would never be the case.

That's just not how the White Sox operate.

So now Anderson has been called up, and I'm a bit torn on the whole situation. There's the part of me that, like any baseball fan, is excited about the idea of the team's top prospect being called up. A new prospect being promoted is like Opening Day all over again.

You really have no idea what could happen, and you're anxious to find out.

There's the other part of me remaining, though. The part of me that was hoping Anderson would get to spend the entire season in Charlotte. After years of seeing the White Sox rush players to the Majors, and the majority of them -- particularly position players -- failing, there's just a natural hesitation.

But Anderson's here now, and all we can do is wait and see what happens. He might be the next Magglio Ordonez, or he's just the latest Gordon Beckham. Time will tell, but for now, here's what you really need to know.

WHO IS TIM ANDERSON?

He's our top prospect, ya idiot! I just told you that!

Phegley was drafted in 2009, and has since been traded to Oakland for Jeff Samardzija.

Between Phegley and Anderson the position players taken in the first round by the White Sox have been Jared Mitchell, Keenyn Walker, Keon Barnum and Courtney Hawkins.

So, yeah, like I've said, the White Sox have had problems developing position players.

IS TIM ANDERSON THE SAVIOR?

No. No he is not. Even if I made this to celebrate the news. 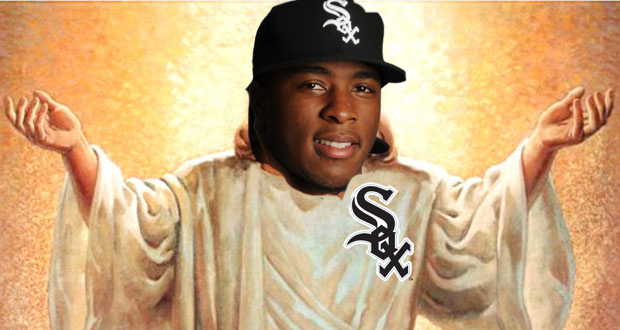 It's important to remember that all things are relative. While Tim Anderson may be the White Sox' top prospect, that doesn't mean he's one of baseball's top prospects. Before the season began he was ranked as the No. 45 prospect in baseball by Baseball America, No. 47 by MLB.com, and No. 19 by Baseball Prospectus. So while there's a wide range of opinion on him as a player, this isn't Carlos Correa or somebody the White Sox are calling up.

This is a guy that has a very good chance of being an offensive upgrade over Jimmy Rollins and Tyler Saladino, but that's certainly not a guarantee.

SO HE'S A GOOD HITTER?

He projects to be, yes. Over the course of his minor league career, at multiple levels, Anderson has been a .301/.340/.426 hitter. Not amazing numbers by minor league standards, but good ones.

More importantly, the last few years as Anderson has moved up to Double-A and Triple-A, his numbers have actually improved. In 135 games with the Birmingham Barons (Double-A) Anderson hit .316/.351/.434. This season with the Charlotte Knights, his first year at Triple-A, Anderson is hitting .304/.325/.409, but those numbers don't tell the whole story, as he got off to a very slow start and has been on a tear since to bring the numbers up where they are.

My major concern with Anderson as a hitter is his approach at the plate. He's not exactly a patient hitter.

In 1,570 career plate appearances, Anderson has drawn 68 walks (4.3%) to 360 strikeouts (22.9%). That's not good. That's definitely something Anderson is going to need to work on if he wants to be a successful hitter in the Majors.

This is why I really wanted Anderson to spend a full season in Charlotte before the call-up. I have a hard time believing he's going to suddenly develop a discerning eye at the Major League level.

The good news, though, is that while he's a free-swinger, he makes enough contact to help offset the lack of walks, but it's pretty clear that Anderson's career OBP is going to be tied to his batting average.

WHAT ABOUT HIS DEFENSE?

I haven't seen enough of Anderson in the field to make a true judgment, but from what I have seen, and from what I've been told, his glove at short is certainly behind his bat. Like, at this point, Anderson probably has more range than Jimmy Rollins, but I don't know if that will ultimately matter just yet.

From what I've seen Anderson is still learning the position, and while he has the athletic ability to help make up for a lack of instinct, he still lacks instinct. So what I'm expecting to see is Anderson use his athleticism to make some amazing plays, while also botching some routine plays. And I don't just mean grounders to short, I mean being in the wrong position on cut-off throws and things of that nature.

There are going to be growing pains, and I'm guessing there will be quite a few times when we see Tyler Saladino come on as a defensive replacement in late-inning situations.

SO IF ANDERSON IS HERE, WHO LOSES A SPOT?

That would be Jimmy Rollins.

When the White Sox signed Rollins I wasn't exactly thrilled about it, but I wasn't angry, either. I was perfectly ready to go into the 2016 season with Tyler Saladino as our regular shortstop because I figured that, even if he couldn't hit, having his glove at a very important defensive position would make him valuable enough.

Yet, when they signed Rollins I didn't think it would hurt to give him a shot, even if I didn't expect him to do much.

No matter what we think of Rollins as the player at this point in his career, he will always be the man that helped get rid of Adam LaRoche, and for that, we should all be eternally grateful.
Carlos Rodon Gordon Beckham Jimmy Rollins Magglio Ordonez Mat Latos Tim Anderson Tyler Danish Tyler Saladino