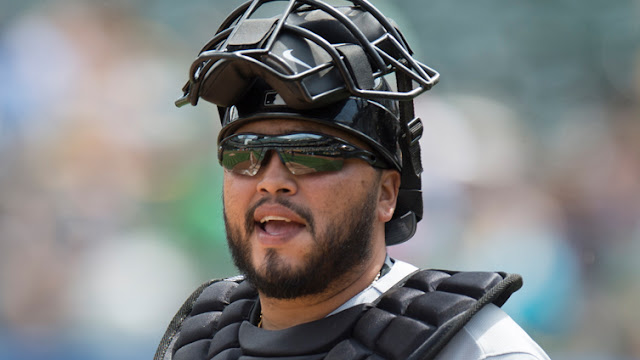 The White Sox have problems.

As you look up and down the roster there's no shortage of players you find that can be improved upon. Because of all these glaring holes, and the creeping onset of reality these last two months, I wrote earlier this week that the White Sox should probably shift out of buyer mode and look to become sellers this summer.

That's not going to happen, though, as Rick Hahn made it clear during the latest road trip that the Sox were going to continue to look for ways to improve the team and compete for the AL Central, or at the very least, a wild card spot in 2016.

If that's the case, there's one area I believe the Sox can address without paying much of a cost to do so: the catcher position.

I was surprised when the White Sox decided to non-tender Tyler Flowers over the winter. I figured that heading into a winter with so many changes needed, the team would look to invest in other areas on offense, and continue to live with Flowers' bat because of what he brought defensively. Instead they went another direction. Both Flowers and Geovany Soto were jettisoned, and Alex Avila and Dioner Navarro were brought in.

The explanation behind the moves was that the Sox were willing to sacrifice defense a bit behind the plate for improved offense from the position. That's a fine theory, and a reasonable explanation, but as far as actual practice, it's been an abject disaster.

So much for the offensive upgrade.

To put things further in perspective, White Sox catchers had a wRC+ of 79 last season, which is certainly not good. The wRC+ of 74 Sox catchers have this season is even worse.

Making matters worse, as Dave Cameron went over in utterly depressing form at FanGraphs on Friday, the defense behind the plate hasn't just gotten worse, it's fallen off the face of the god damn earth. Tyler Flowers was one of the best pitch-framers in baseball last season, stealing strikes for the entire staff. Soto wasn't elite, but he was above average.

This season Alex Avila and Dioner Navarro have been awful at framing pitches. Using StatCorner's numbers, there are only four catchers in baseball that have been worse framers than Avila. One of them is Navarro.

Nobody has been worse than Navarro.

That means both White Sox catchers are among the five worst in baseball when it comes to framing pitches, and it's having a big impact on White Sox pitchers.

Fortunately, I believe this is an area that can be addressed rather simply.

Many White Sox fans are dreaming of the team trading for Jonathan Lucroy, as he seems like an absolute perfect fit for the team. He'd be a huge upgrade at catcher both offensively and defensively, and he'd just be a big boost to the offense on his own. The problem is that Lucroy is a very good fit for a lot of teams, and he's wanted, so his price will not be low.

The White Sox -- as you may have heard a billion or so times -- don't have a strong farm system. If they were somehow able to offer Milwaukee enough to pry Lucroy away, the system would probably need to be stripped bare to do so. That would leave the team nothing to improve other areas -- hello, bullpen -- that clearly need work, and it would also take a torch to all this talk about building for the future while trying to win now.

So Lucroy isn't a feasible option, but that doesn't mean there aren't other catching options that wouldn't at least be an improvement defensively. Let's take a look at some possible candidates.

Castro would be a great fit for the White Sox, as he's currently the second-best framer in MLB this season, behind only Buster Posey. Offensively he strikes out a ton, but he also walks a lot, which results in a slash line of .209/.339/.392. Still, even with that low average, his wRC+ is still above league average at 102 (100 is league average). So he's an upgrade defensively as well as offensively. The problem is that Houston, after getting off to a 7-17 start in April, has gone 30-19 since May and is now firmly back in the playoff hunt. I doubt the Astros will be looking to trade Castro.

I don't know how feasible this would really be, but I don't think it's exactly impossible, either. The Cubs clearly love David Ross, who has done an excellent job in his final season as he's been forced to take on a larger role due to injuries to Kyle Schwarber and Montero at times. The Cubs also just called up Willson Contreras, who is just the latest Cubs prospect to come up and be awesome right away. All of which means Montero could probably be had. The problem here, however, is that even if he is an upgrade, he's owed roughly $7 million still this season and another $14 million next year. So even if the prospect price is low, the actual price tag isn't.

Hey, you've already struck one deal with the Padres, maybe you can come to agreement on another. Norris wouldn't provide much of an improvement offensively -- he'd basically just be White Sox Tyler Flowers at the plate -- but he would be an improvement behind the plate. You'd also still have him under team control until after the 2018 season, but the Padres may be willing to move him since they have Christian Bethancourt, who has played well and is considerably cheaper. As for the White Sox, even if Norris has a wRC+ of only 79 this season, there's still a chance he could revert to being the hitter he was from 2013 to 2015 when he hit .256/.333/.405.

He's far from a sexy option, as he's not going to bring much of anything offensively. He has a wRC+ of 53 this season, and only 69 (nice) for his career. He's a major upgrade defensively, though. While Lobaton ranks 17th in MLB this season using StatCorner's framing stats, he's reached that height despite very limited playing time. On a per game basis he actually ranks 13th, ahead of guys like Lucroy, Yadier Molina and Norris. I'm just not sure this would work because, like I said, he's nothing offensively, and I can't help but believe the Sox will refuse to go after a guy that doesn't even offer the promise of a whisper of offensive ability.

Casali is a very similar situation to Lobaton, in that he's not going to hit much of anything, though he at least poses the threat of running into a fastball occasionally. He's also very cheap financially, as he's making $513,000 this year, isn't eligible for arbitration until after 2017, and can't be a free agent until after the 2021 season. So, sure, you'd be getting a 27-year old catcher who can't hit, but at least you'd be able to keep him cheap until he's 32! But, like Lobaton, I don't think this is a really desirable option because even if he's better defensively than what the Sox have, it's not like he's a major defensive upgrade, either. So some hitting would be nice.

Yup. Funny thing about Tyler Flowers, not only has he maintained his ability to frame pitches behind the plate -- he currently ranks fifth overall in MLB after finishing second last season -- but he's actually hitting a bit this season too. As mentioned at the beginning of this post, White Sox catchers are hitting .223/.304/.330 this year with a wRC+ of 74. Well, Flowers is hitting .237/.335/.363 with a wRC+ of 95 for the Braves. He's also pretty cheap, as he signed a two-year deal worth $5.3 million with the Braves, including a team option for 2018 (the option is for $4 million or a $300K buyout). Now, because of that, and because of the fact that the Braves traded Christian Bethancourt to the Padres, and have A.J. Pierzynski backing Flowers up, there's no guarantee the Braves even want to trade Tyler. That being said, they still aren't going anywhere in 2016, and I don't believe they would immediately hang up the phone on you if you called an asked about him, either. The White Sox have already admitted their mistakes on guys like Mat Latos and Jimmy Rollins this season. It might not hurt to admit they made one with Flowers as well.
Alex Avila Derek Norris Dioner Navarro Geovany Soto Jason Castro Jonathan Lucroy Miguel Montero Rick Hahn Tyler Flowers