Are The White Sox Going After Justin Morneau? 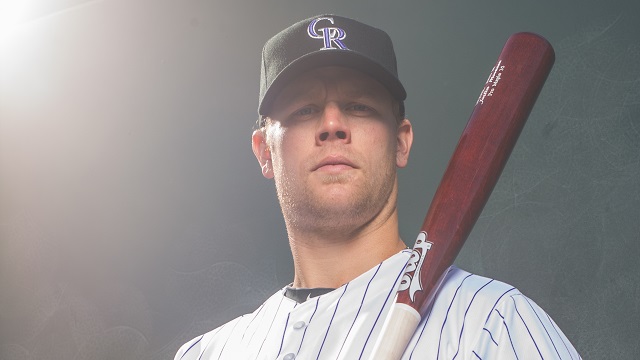 The White Sox have already traded for James Shields, and according to Rick Hahn, they're still planning on making a few more moves before the trade deadline this summer.

You would think that the most obvious move is to find another bat, particularly one that swings from the left side of the plate, and can hit balls further than 350 feet once in a while. Be that a Jay Bruce, a Carlos Gonzalez, or even a Carlos Beltran, the White Sox definitely need more power in their offense, and a lefty would be ideal for balance.

It appears that they're looking to satisfy at least half those needs via free agency, however.

Back in mid-March the Sox were in the middle of the Adam LaRoche saga. In need of a replacement for LaRoche so they didn't do something like give a roster spot to Jerry Sands -- who the fuck would do that, right? -- I recommended an old friend: Justin Morneau.

Not long after that the news broke that Morneau had actually had surgery on his elbow in December, and he wouldn't be able to swing a bat again until June, thereby putting an end to any thought of Morneau replacing LaRoche on the roster as "lefty first base/DH type with a French sounding name."

Morneau is back on the radar!

Now, obviously, if the Sox do this, it's not the answer, but that doesn't mean it couldn't be a boost.

Now that the Sox have officially given Jerry Sands the DFA treatment, there isn't a natural first baseman on the roster to back up Jose Abreu. Morneau could fill that role, while also serving as a designated hitter against righties occasionally.

I say occasionally because I don't want to believe that Morneau is the goal for the designated hitter. The Sox are going to trade for an outfielder, and either put them at DH or move Melky there. At least, that better be the case, because if Morneau is the goal, we're in some trouble.

But, again, Morneau isn't a horrible option to take a flyer on at all, even in a limited role.

While the 30-home run power he showed as a Twin is gone, he's still proven to be a capable hitter the last few years. While with the Rockies he slashed .316/.363/.487, and while I can hear you screaming "Coors Field" as you read this, his OPS+ -- which adjusts for the park being played in -- during that time was still 120, which means he was 20% better than league average in the same conditions.

Most of this damage was done against righties, which is exactly whom I'd expect Morneau to be facing more times than not with the White Sox. That comes with the caveat of Robin Ventura White Sox Manager, of course, just like everything else you believe to be common sense when it comes to the day-to-day operations of this baseball team.

Anyway, the point of all of this is that it's worth kicking the tires on Morneau, even though I wouldn't expect him to be ready to face Major League pitching until July.
Adam LaRoche Jerry Sands Justin Morneau Rick Hahn