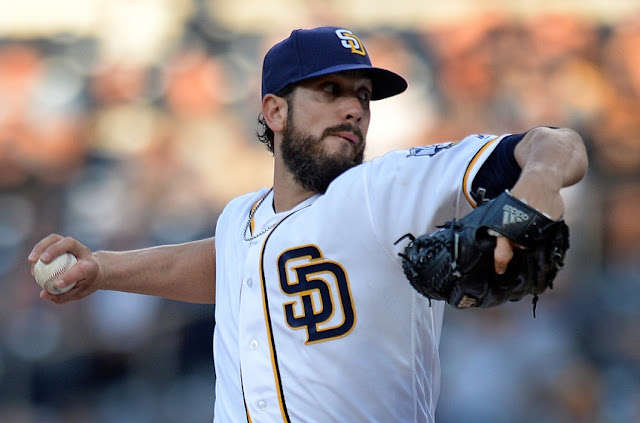 So James Shields is a White Sox now.

This is such an odd trade. Here are the White Sox, making the first major trade of the baseball season, acquiring a pitcher with a big name, and my reaction to it was similar to seeing a license plate from Alaska while driving in suburban Chicago.

If that seems like an odd comparison, I only make it because I literally saw an Alaskan license plate on a Kia while driving in Elmhurst on Saturday afternoon, moments after I received a notification on my phone that the Sox had the "framework" for the Shields deal done, and had very similar reactions to both.

Why is that Alaskan Kia driving through suburban Chicago? Who the hell drives to Illinois from Alaska? Why are we trading for James Shields when we can't even win Chris Sale and Jose Quintana starts? Fernando Tatis has a Junior?

Oh, shit, I was supposed to make a right back there.

When it comes to the actual schematics of the trade, I have no complaints. I've never been a believer in Erik Johnson, so losing him means nothing to me. In fact, it's probably better for Johnson to be in San Diego, where Petco Park won't be as unforgiving about the fact he has a career groundball rate of only 38% in MLB, and should help lower that 1.74 HR/9.

As for Fernando Tatis Jr., I've heard some positive things about him since learning of this trade, but he's a 17-year old that I wasn't even aware was in the system until his name popped up in these trade rumors. It's possible I'll be pissed off the Sox traded him in seven years, but right now, I don't care all that much.

Then there's the money. It's hard to be upset about the money, because the Sox are getting a pretty good deal here considering all they had to give up was Johnson and Tatis.

Considering the man just signed a what was essentially a four-year, $77 million deal with San Diego before last season, that's quite a discounted rate.

There is that opt-out, however.

Now, common sense says that a pitcher who is owed at least $43 million, and turns 35 in December, would not opt-out and put himself back on the free agent market. The reason he might, though, is because the free agent market for pitchers this winter is absolutely barren.

Following Stephen Strasburg's extension with the Nationals, the best starter slated to be available this winter is Rich Hill. Now, Hill is having a nice season for Oakland, but he's still Rich Hill. Considering that a guy like Ian Kennedy was able to pull in a $70 million contract with the Royals last winter, it's not ridiculous to imagine Shields getting a better payday.

It's also possible that he hates it here, and is willing to give up some money to return closer to home and finish his career. I believe that's a key reason he ever signed with San Diego in the first place.

Still, even if Shields does choose to leave at the end of the season, it won't be the worst thing in the world. Hell, it might even be the best move for all involved at that point, we don't know.

Shields' numbers are a bit skewed. He has a 4.28 ERA, and a 5.16 ERA outside of Petco this season, but those are the result of one horrid start. In his last start, Big Game James gave up Big Time Runs, allowing 10 runs in 2.2 innings, and causing San Diego's owner to go on the radio and throw a temper tantrum, saying Shields' performance was "an embarrassment to the team," thereby crushing his trade value, and allowing the Sox to get him for Johnson, Tatis and less than 50 cents on the dollar.

So that terrible start was good for the Sox.

Remove it from the equation and Shields has an ERA of 3.06 on the season and 2.33 outside the vast confines of Petco.

What's somewhat worrisome is that Shields K% is down this season, but it's down from a career high of 25.1% in 2015. The 20.1% it's at this season is basically in line with what Shields has done throughout his entire career, so I don't even know that it is something to be scared of.

I might be worried about James' ever decreasing velocity, but he's made up for what his fastball lacks with a knucklecurve and a changeup that was once great, and is now still above average.

Shields is a workhorse. He's pitched at least 200 innings in each season since 2007, and he'll probably do so again this year. That's valuable to any team, but it has more value for a team like the White Sox who had two pitchers in the rotation in Mat Latos and Miguel Gonzalez whom you could really only rely upon for five innings. So you aren't just slotting Shields in behind Quintana and Sale, putting less pressure on Carlos Rodon, but you're saving your bullpen from working innings you don't really want them working anyway.

So, like I said, there's really nothing to hate about this trade if you look at it logically, it's just there's nothing terribly exciting about it either.

This is still a team in dire need of another bat, and it could really use a bullpen arm capable of striking hitters out. If the Sox do not acquire each of these things, and possibly a little more, the Shields trade alone isn't going to lead the team to a division title.

And that's what keeps this deal from being exciting.