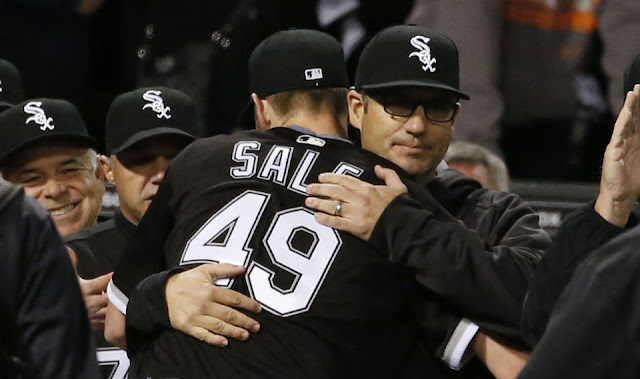 Chris Sale has been a busy man lately.

In the last week he's taken a stand against the clubhouse policies of the Seattle Mariners, and he's taken a knife to White Sox uniforms.

Now, as part of the fallout of the uniform situation, Sale is taking a shiv to his manager.

Sale talked to MLB.com's Scott Merkin on Monday about the uniform incident, and what drove him to do what he did. Long story short, Sale felt the uniforms "were uncomfortable and unorthodox," so he went to work slicing and dicing. As I wrote already, I don't really believe Sale's tantrum was about the uniforms, as much as they were the vessel Sale chose to let out his frustrations about other matters.

I believed those matters to be the trade rumors mentioning his name, and the sudden talk of a possible rebuild around him. While I still think that played a role, buried a bit toward the end of Merkin's story with Sale could be another source of Sale's frustration.

A source of frustration shared with many White Sox fans.

Sale told Merkin that when he arrived to the stadium on Saturday and saw the uniforms, he took his complaints to Don Cooper and Robin Ventura. Ventura essentially told Sale they were going to wear the uniforms, and this pissed Sale off, and he admitted to Merkin he "lost his cool" with his manager.

"Robin is the one who has to fight for us in that department," Sale told Merkin. "If the players don't feel comfortable 100 percent about what we are doing to win the game, and we have an easy fix -- it was as easy as hanging up another jersey and everyone was fine. For them to put business first over winning, that's when I lost it."

Coming into the 2016 season, Robin Ventura found himself in a precarious position. He was entering the final year of his contract, and had failed to post a winning record in any of his previous three years. After two "go-for-it" winters, it was clear that if the White Sox didn't win in 2016, Robin Ventura was unlikely to return for another season.

Now, here we are in late July, and it sure doesn't look like the White Sox are destined for a winning season. As a result, Robin Ventura is struggling to keep his head above water, in desperate need of a lifeline, and now here's Chris Sale chucking cinder blocks for him to hold on to.

I've long had a problem with Robin Ventura as a White Sox manager. Many of his in-game decisions have driven me insane over the last four years -- some more than others -- but throughout this whole process, Sox fans have been informed by the team and some members of the media that we aren't privy to Ventura's greatest assets to the team.

It's what Robin does in the clubhouse. The way his players respect him, and listen to him.

This is what we're told.

We've seen Robin handle the clubhouse well enough that the Adam LaRoche situation blew up this spring because new players -- veteran players -- went above Robin's head and directly to Kenny Williams to handle the situation, because they clearly didn't trust Robin could do it.

Now we've seen Chris Sale -- the best player on the team, and a guy who is actually allowed to say his boss should be fired publicly with no consequence -- throw his manager under the bus, voicing an opinion that he doesn't believe Ventura represents the players in that clubhouse.