Chris Sale Needs To Grow Up 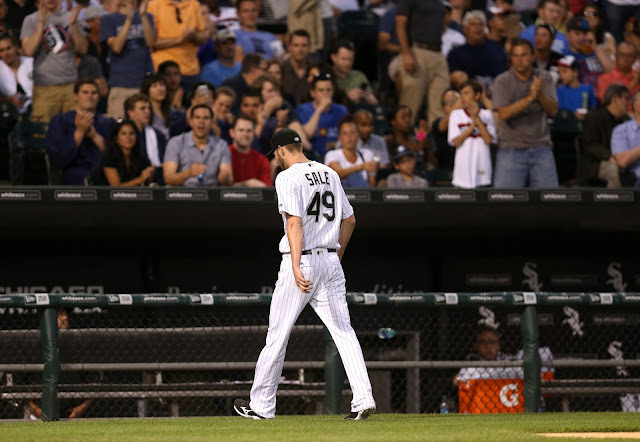 On Saturday afternoon I was at my sister's house for my nephew's birthday party. We were celebrating his third birthday, and along with friends and family, there were a lot of children. The oldest was around eight or nine.

Throughout the afternoon, the kids ran around the backyard, splashing in the pool, leaping through the sprinkler, and flopping around in the bounce house. They played with toys, and occasionally, one of the kids would want the toy that another one of the kids had.

The kids then shared the toy.

As the afternoon wore on, eventually people began to leave the party. If you were outside yesterday, you know how hot and muggy it was, and there was occasional rain to boot. So some folks were cutting out early.

At one point, a friend of my sister's tried to collect her son to go home. He did not like this one bit. He wanted to stay and keep playing with all the other kids. He threw a tantrum, letting out a piercing scream/cry that actually caused me to shudder.

It was at this point that I checked my phone for the first time in a while, and saw the news: Chris Sale had been sent home for cutting up the team's throwback uniforms.

The coincidence was not lost on me.

This is not the first time Chris Sale has thrown a tantrum during his time with the White Sox. Earlier this season, when the Adam LaRoche saga occurred, Sale reamed Kenny Williams -- his boss -- in front of the entire team. He undermined his boss's authority in front of everybody.

Then, after doing that, he decided to hold court with the media, and at one point during that public session, he said that LaRoche shouldn't have been the person walking out that door, implying that Kenny Williams should leave.

Which is a perfectly fine thought to have. Plenty of people don't like their boss, it's just that most of those people are mature enough to not let everybody know about it. They just shut the hell up and go about their business, venting their frustrations to friends and loved ones outside of work.

The way Sale handled it, however, was basically the textbook example of how not to be an adult.

These aren't the first instances of Sale blowing up at his boss, either. A few years ago, when Sale was transitioning from reliever to starter, the Sox overreacted to a minor ache in Sale's arm, and tried to turn him back into a closer. Chris did not like it, and Chris shared this with both Kenny and Rick.

He kept it in house this time, and it was actually the team who let it be known because they wanted to play up the whole "fiery competitor" angle.

There have been other instances since, because, immature or not, Chris Sale really is an ultra-competitive son of a bitch. He's going to blow up, and there's nothing wrong with it, as long as it's kept in house.

This year seems to show that Sale is trying to explore his power within the organization, though. As if he's trying to see just what he can, and can't get away with.

Saturday's incident was just the latest example. Now, the reports are that Sale did not like the throwback 1976 uniforms the Sox were going to wear -- and I certainly can't blame him for that as they're hideous -- and that they were uncomfortable. So during batting practice he cut them to shreds so the team didn't have to wear them, and then reportedly complained that the team was too busy worrying about marketing and promotions than winning games.

Not that the Sox care about marketing or promotions -- find me a team, or hell, find me a business of any kind that doesn't -- but that it's what led to Sale's tantrum. The uniforms were just the outlet, not the reason.

It doesn't take a genius to figure out that the root of this all is the trade rumors suddenly surrounding Sale. Throughout his career there have been trade rumors about Sale, but they've never had any merit. They were just fans, and sometimes local media in different markets, daydreaming about things that never had a chance to happen. Sure, the White Sox would answer the phone if other teams called, but the chance of a trade ever being agreed to was nearly nil.

This time is different, however, this time there's a non-zero chance.

When Sale has heard about all the teams checking in on him the last few days, he knows there may be more involved because of what Rick Hahn came out and said earlier this week. Hahn said the team is "mired in mediocrity" and that they need to consider all their options. He also said the idea of trading either Sale or Jose Quintana was "extreme," but he didn't say it was impossible.

Of course, I don't think the White Sox are going to trade Sale, and I think that, deep down, Sale knows that too.

I believe the problem is that Sale is realizing that the rest of the team could be on the move, and that the White Sox might actually be looking to start over with a bunch of new parts around him. He sees the possibility that he could be spending the prime years of his career playing for a team with a minimal chance of making the playoffs, which is no different than the first seven seasons he's spent here, but at least in February and March you can convince yourself there's a shot.

That's not the case during a rebuild.

So he's frustrated, and I certainly can't blame him for it because, even as nothing more than a fan, I share the same frustrations. While I don't know what it's like to actually be Sale in such a situation, I can empathize with him.

Sale then took those frustrations out in a manner that could be described as childish at best.

And it was embarrassing. For Sale, for the White Sox, and for White Sox fans.

It's not fun watching a bad team continue to be bad, while annoyed by the decisions so many people who are entrusted to make good decisions continually mess up. It's even worse when your team goes from being bad to a national punchline, which is what Sale did on Saturday for the second time in four months.

In a season in which Chris Sale might win the first Cy Young Award of his career, he won't be remembered for having a fantastic season as much as he will be for being the baby who cut up the clothes mommy bought him at the store that he didn't like.

Now, while I believe Sale is completely in the wrong about Saturday's tantrum, don't get me wrong. I don't place all the blame squarely at his feet. The White Sox have let Sale get away with this for too long. He may be the best player on the team, but he's still an employee, and he should be held accountable to the same standards that all employees are held to. The White Sox have not done a good job of this, be it Jerry Reinsdorf, Kenny Williams, Rick Hahn or Robin Ventura. The lack of discipline for previous outbursts helped lead Sale to push the boundaries even further, to see what he can get away with.

He's now been suspended for five days. Whether it'll keep Sale from throwing another tantrum or not remains to be seen, but the White Sox simply had to so something. Whether Sale learns from it is completely on him now.