Possible Relievers For The Sox To Target In A Trade 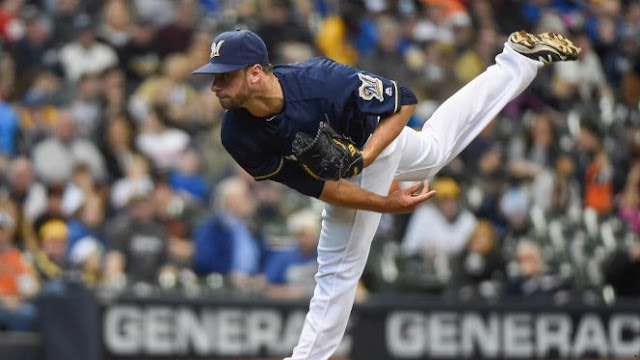 It's strange to write posts about players the White Sox could target in trades these days because, for all we know, the Sox could be sellers at the deadline. That's just the kind of perilous position they find themselves in at the moment.

Sure, they're above .500, and they're within striking distance of a wild card spot, but they're also a bad weekend away from being an afterthought.

What we do know, though, is that, at the moment at least, the Sox consider themselves a contender, and they're going for it. That's why they opened the second half of the season by adding Justin Morneau and Carson Fulmer to the roster.

The Morneau addition was for obvious reasons. The Sox have been interested in adding a lefty bat to the lineup all year long -- and even before when you remember their courtship of Alex Gordon which certainly seems like a bullet dodged -- and Morneau is a cheap option. If he works out, awesome, if he doesn't, oh well.

The Fulmer promotion was somewhat more surprising, but it's easy to see the cause behind it. The Sox need help in the bullpen. With Zach Putnam still sidelined, guys have had to take on more important roles than you want them taking on, and Fulmer might bring something the pen sorely lacks: strikeouts.

Fulmer, even if he proves to be ready, won't be enough, however. The truth is, if the Sox truly fancy themselves contenders, they have a few more holes to fill, and another arm in the bullpen is one of them. Particularly with Putnam's status still being in doubt.

Of course, while the White Sox have a lot of needs --pen, catcher, another bat capable of hitting the ball often enough, and sometimes over 400 feet -- they don't have much prospect depth in which to acquire the needed players. That doesn't mean they can't find some possible solutions.

The big bullpen names you keep hearing about play for the Yankees, and they're named Andrew Miller and Aroldis Chapman. The White Sox are getting neither.

But there are other -- cheaper -- options that could be worth the price if the Sox want to go after the less splashy bullpen arms.

After doing some research, these are some bullpen arms on teams I believe will be selling that could probably be had at a relatively fair price.

Tyler Thornburg, Milwaukee: I don't know how willing Milwaukee is to move Thornburg, but they are in a rebuild, and even if he's been very effective, he's still a bullpen arm, and he's still turning 28 in September.

What I find so enticing about Thornburg is his 34.8% K-rate. His ERA of 2.57 is obviously good, but it could be a bit misleading as he has a FIP of 3.41. So there may be some "luck" regression, but as long as he's striking guys out at that same rate, he could come in very handy for the White Sox. He also has a walk rate of 8.7%, which isn't great, but when you strike out as many hitters as he does, you can live with it.

Another bonus for Thornburg is that he's under team control through the end of the 2019 season.

Trevor May, Minnesota: It's always weird to strike a deal with a division rival, but Minnesota isn't going anywhere this year, and I don't think the Twins consider May to be an integral part of the core going forward. Now, when you see May's 5.34 ERA I'm sure it sets alarms off in your head, but let's not forget that he's pitching in front of a bad team.

His FIP is a much more digestible 3.64, which suggests he's due for a fucking break.

He doesn't have the same K-rate as Thornburg, but 32.6% is still nice, and he's got a K/9 of 13.4 as well as a K/BB ratio of 4.09. He's the kind of arm the Sox could use, and he's not even eligible for arbitration until after next season. So the Sox would control him for a while.

Tyler Clippard, Arizona: The Diamondbacks recently shipped their closer, Brad Ziegler, to Boston, and it was assumed Clippard would see more save chances for Arizona. Well, Arizona doesn't have much need of a closer, and it's made it clear that while it won't trade any of its starters, its relievers can be had.

I have a feeling he'll draw interest from other teams as well, so it may push his price too high, and then when you consider he's still owed $6.15 million next season, it might be best that the Sox avoid him anyway.

Alex Colome, Tampa Bay: I don't know how available he'd be because Tampa Bay doesn't like to trade guys making the league minimum, and Colome isn't eligible for arbitration until after the 2017 season. Still, it can't hurt to call and ask.

Colome has a K-rate of 30.7%, an ERA of 1.69 and a FIP of 2.68. Oh, and he currently has a strand rate of 90.4%. Now, that probably isn't sustainable, but given the problems Sox relievers have had with leaving runners on base, it's still pretty fucking appealing to these eyes.
Alex Colome Carson Fulmer Justin Morneau Trevor May Tyler Clippard Tyler Thornburg Zach Putnam