The Case For Trading Jose Quintana 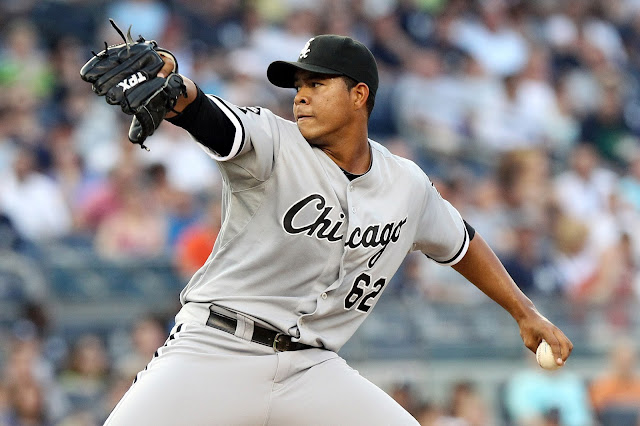 The White Sox are a ship that's constantly taking on water, and the organization's approach to this perilous situation is to just keep putting more duct tape on the leaks, and then hoping like hell that she can make it to shore.

But what if there were a trade they could make that wouldn't truly signal a rebuild, and at the same time, could also set the team up to not only improve in 2017, but possibly in the long term as well?

On Tuesday afternoon I asked my Twitter followers a rather simple question. The results of the poll weren't that surprising.

With 618 votes, I wasn't surprised that the natural reaction by the plurality was not to trade either Quintana or Chris Sale. I couldn't vote in the poll, but if I were able to, I would have voted the same way.

Then, of course, there's the angry portion of the fan base. You know who they are. Hell, you may even be one of them. They want to blow this thing up all the damn time, so they opted to trade both Sale and Quintana, which we know isn't going to happen (at least, not this year).

Ahead of that 24%, though, was the 26% of the voters who opted for trading Quintana.

Again, I do not want to trade Jose Quintana. I believe that if you're going to make that move, it's next summer, not this one. Just because I don't agree with it, though, doesn't mean I don't see the merit behind it.

Listen, Jose Quintana is a very good pitcher, and he has been for a while. It's just not enough people seemed to notice until this season, as he just appeared in his first All-Star Game last week, and even then, he needed a couple other guys to back out before getting the call.

As any Sox fan knows, Quintana is a very good -- borderline great -- pitcher who has some of the worst god damn luck you've ever seen when it comes to run support.

He's extremely valuable to the White Sox. In fact, using WAR -- be it the BRef version or Fangraphs version -- Jose Quintana has been more valuable to the Sox this season than Chris Sale. As valuable as he is, though, the fact of the matter is, Quintana's presence hasn't been enough to take the White Sox anywhere.

While holding his career record of 40-42 against him is both misguided and foolish, since Quintana joined the team in 2012, the Sox have finished the season with a winning record only once. This isn't to say it's his fault. It isn't. Jose, like Sale, Jose Abreu, and Adam Eaton, just haven't been surrounded by enough talent. That's on Rick Hahn and Kenny Williams, not Quintana.

But the point is, the Sox can still be bad with Quintana, as they've proven time and time again.

There's a chance that the best thing Quintana could do to make this team a winner is to be traded. Going off of Fangraphs' recent trade value rankings, Jose Quintana is the 25th most valuable asset in baseball. Not among pitchers, or just in the Majors.

He ranks 25th of every player at every position, all the way from MLB down to Single-A. He's ahead of names like George Springer, Addison Russell, Carlos Carrasco, Gerrit Cole, and so many others.

So, you know, if you wanted to trade him, you'd get a worthwhile return.

And even if I'm not entirely behind the idea -- how many times will I feel the need to re-iterate this -- looking at it from another angle, this summer might actually be the ideal time to do so.

Look at the market right now. There aren't exactly a lot of top-line starters being made available. Sonny Gray's name has been bandied about since last winter, but Gray has struggled this season. He's struggled so much that there might actually be more teams interested in his 36-year old teammate Rich Hill.

This winter's free agent market is just as bleak.

So let's say you put Jose Quintana out there. You dangle him on a line off the side of your sinking boat, and you see who comes around and takes a nibble.

This is one of the best pitchers in the game, a lefty, and one who has four ridiculously affordable years of control left on his deal. That's one tasty morsel dancing on that line.

How much could you get for that?

If we go back to this time last year, the Phillies had Cole Hamels. He was the top name on the trade market, and Philly ended up sending Hamels -- who is four years older than Quintana, and is making more in 2016 than Quintana will in the next 2.5 years -- to the Rangers for three guys who were considered top 100 prospects before this season, a guy who has been in Philly's starting rotation this season, and has done rather well in Jerad Eickhoff, and another pitcher in Alec Asher, who probably won't be anything special. The Phillies also took on Matt Harrison in the deal, but that was more of a salary relief as far as the Rangers were concerned. Philly also sent Jake Diekman to the Rangers along with Hamels, and he's been a nice part of Texas' bullpen.

That's what looks to be a pretty good haul for the Phillies.

The difference in situations here is that the Phillies were going for a complete overhaul, and the Sox aren't. So instead of going after a plethora of prospects, the Sox could try to trade Quintana for a couple of top prospects, and maybe a Major League ready player.

Again, the fact Quintana is only owed $37.85 million if you keep him through 2020 only adds to his value. So when you combine his age and contract, he could conceivably bring back more than Hamels did for the Phillies.

Hell, maybe Quintana joins Hamels in Texas. The Rangers are in need of another starter, and they still have a deep farm system. There's also Boston, or Houston.

Where you trade Quintana doesn't really matter here, the point is that there's no shortage of teams that would be interested, and it would only drive up the price.

So, for the sake of argument, let's say Boston wants Quintana. The White Sox could possibly get guys like Yoan Moncada and Andrew Benintendi, two of the top prospects in baseball, as well as somebody like Eduardo Rodriguez. Maybe you tack on David Robertson -- the Red Sox lost Craig Kimbrel, remember -- to make the return even better.

The particulars here aren't what matter.

The point is, if the Sox can trade Quintana for a couple of top prospects, the kind who aren't only highly-rated, but near ready to contribute on the MLB level -- like Moncada, or Houston's Alex Bregman -- they can fill a couple of other roster holes with more than just duct tape, and do it with cost-controlled players who will be around for years.

Sure, this opens a hole in the rotation, but if the Sox are truly believers in Carson Fulmer, you have Jose's replacement in house already. You head into 2017 with Sale, Carlos Rodon, Fulmer and James Shields as your top four, and you go from there.

It wouldn't be the total reset that's probably needed, but it could be quite the jolt to the "rebuild-on-the-go" model this team seems to be in love with.

So, there you have it. Even if I don't want the White Sox to trade Jose Quintana, the fact of the matter is they should probably give it serious consideration over the next few weeks.

If you're serious about the direction you're heading, you owe it to yourself, and the team to see what's out there.
Carlos Rodon Carson Fulmer Chris Sale James Shields Jose Quintana Kenny Williams Rick Hahn