There's No Better Time To Move Carson Fulmer Into The Rotation 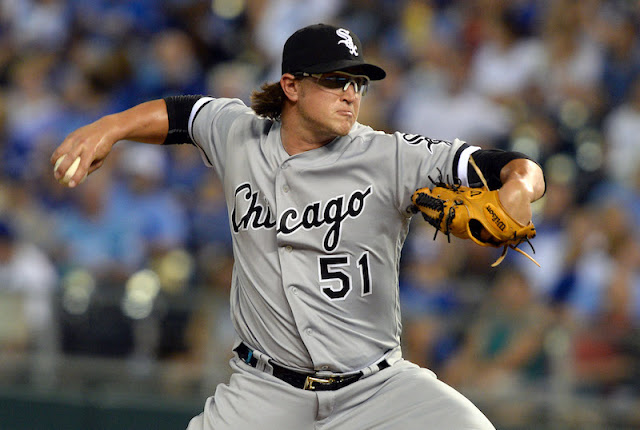 
ORIGINAL STORY: The White Sox will resume their current road trip on Tuesday night in Cleveland, but there's a rather large question mark facing the team during the three game series.

Jose Quintana will start on Tuesday in the first game, and Carlos Rodon will start Thursday in the third game. Who's starting the Wednesday game?

We don't know yet, but it should be Carson Fulmer.

The open spot in the rotation is due to an injury to Miguel Gonzalez. Gonzalez was placed on the disable list with a strained groin he suffered on August 11 against the Royals. It's a crappy injury, but one that should have been expected, as Miguel Gonzalez was one of the few bright spots surrounding the White Sox in 2016, and this is not a team meant to experience pleasant feelings.

Still, as much as Gonzalez's injury sucks, it provided a perfect opportunity for the White Sox.

Miguel left that start with his groin strain after only an inning, and one of the three pitchers that came on in relief to finish the game was Carson Fulmer. The same Carson Fulmer who hasn't pitched in a game since.

This would lead you to believe that the Sox plan on having Fulmer take Gonzalez's spot in the rotation, which is exactly what they should do, and is also why we shouldn't expect it. After all, it's not like Fulmer hasn't been left rotting on the bullpen bench for days at a time before. He was called up on July 15, making his debut on the 17th. The White Sox have played 28 games with Fulmer on the roster, but he's appeared in only eight of them, pitching 11.2 innings.

Time after time Robin Ventura has gone to guys like Matt Albers, who has no future with this team, instead of opting to give Fulmer a look. I understand Ventura may "trust" Albers more since he's a veteran, but he's also very bad, and it's not like there's anything left to play for other than 2017.

There's no win streak that's going to save anybody.

Anyway, I'm getting off track here. That's the danger of mentioning Robin Ventura's in-game decisions. They can prove to be a rabbit hole difficult to escape from.

My point is this: Carson Fulmer was your first-round draft pick in 2015. You drafted him with the 8th pick in the draft because you believe he is a starter. There's a lot of disagreement on this -- I think he's a reliever -- but you think he's a starter, an Fulmer certainly believes he's a starter too.

“I was drafted as a starter — that’s how I see my future — but I don’t ask a bunch of questions," Fulmer told FanGraphs. "I just keep my head down and do whatever the club wants me to do. But I definitely want to start. That’s how I view myself. A lot of people would say they don’t agree, but that’s where I’m most comfortable, and it’s what I want to be later in my career. But again, right now I’m just focusing on helping the team any way I can."

And, you see, even though I believe Fulmer is destined for a bullpen role, I certainly don't believe I have the final say in his future. I'd like to see him get a shot at starting, and is there really a better time to find out than now?

Again, you aren't playing for anything at this point. You aren't winning a wild card, so unless the idea of finishing in third place is something you deem to be a worthy goal, it's time to start preparing for 2017.

It's possible that Fulmer could be a major part of your plans in 2017. It makes more sense to give him starts against MLB competition now than in spring training. You'll learn a hell of a lot more about what you have now, and you'll also learn what needs to be worked on in the offseason and next spring, therefore putting Fulmer in the best position to open 2017 in your starting rotation.

So the smart move for the White Sox would be to announce that Fulmer will start on Wednesday in Cleveland.

Whether or not it's the one they make, well, I guess we'll have to wait a bit longer to find out.
Carson Fulmer Matt Albers Miguel Gonzalez Robin Ventura