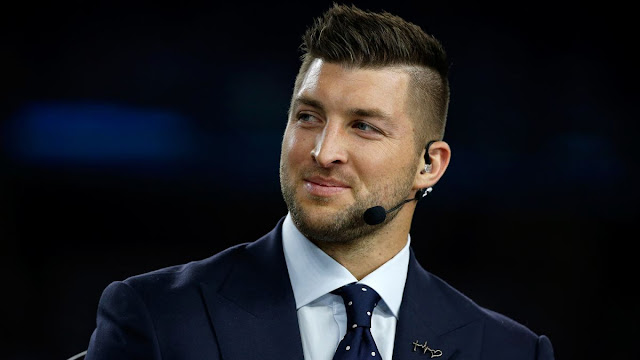 In case you haven't heard the news, Tim Tebow wants to give baseball a shot. Yes, that Tim Tebow.

The guy who won a Heisman Trophy and two national titles as a quarterback at Florida. The guy who some Denver Broncos fans were upset to see pushed to the side for some scrub ass bastard named Peyton Manning.

And good for him. You can be certain that he's going to catch plenty of shit for this, because it's easy to make fun of Tebow, and pretend he isn't an incredible athlete just because he wasn't a good NFL quarterback. We'll mock him, and tell him he's doomed to fail, all the while wishing we'd have had the chance at 29 to say "fuck it" and give baseball a shot.

Tebow is in a position where he can do it, and I wish him luck. I don't think he'll make it. Not because he isn't talented, because he was a good baseball player in high school before going to football full-time, but because baseball is a very hard game to master when you dedicate your entire life to it.

When you've taken relatively 12 years off of the sport, I don't care how good you were, this isn't just a bicycle you can get back on and ride.

But even if I don't think he's going to make it, I still think the White Sox should sign him. Seriously!*

I even have three reasons why.

1. THE WHITE SOX COULD REALLY USE THE ATTENTION: Listen, fellow Sox fans, don't get defensive over what I'm about to say here, just accept it as fact. Our team is an afterthought when it comes to baseball in the city of Chicago.

It doesn't matter that the White Sox won a World Series in 2005.

It doesn't matter that the Cubs haven't won in 108 years or however the hell long it's been.

The Cubs are just more popular than the White Sox. No matter what reason or excuse you want to give for this being the case, it's just the damn case. Accept it.

Things aren't bound to change any time soon, either. While the Sox have sucked the last five years, the Cubs are quite good now because they sucked on purpose for a few years. It remains to be seen whether or not they'll actually win a World Series, but it's hard to deny the Cubs are set up to get a few shots at one in the next few years, while we're just, well, I don't want to say doomed to a life of pain, but I honestly can't come up with anything more accurate than that at the moment.

Because of this the Cubs are getting even more attention than usual, while the Sox are getting less than they already were. Signing Tebow would change this.

Tebow is a cult hero to many, and because of this, he's a hot-button topic when it comes to sports media, and not just locally. ESPN will dedicate a reporter to Tebow's baseball career. Seriously. There will be updates galore on him as he's on his journey to be a big leaguer, and the White Sox will be mentioned more often than they are now, or ever have been before.

Brands are the thing today, and Tim Tebow would #grow the #brand.

2. HE'D PROBABLY BE ONE OF THEIR TOP PROSPECTS: Seriously, our farm system is trash. Okay, that's a bit harsh, but it's not exactly elite. The White Sox have always had trouble developing position players, so you may as well take a shot on Tebow.

The absolute worst thing that can happen is that he doesn't make it, but nobody expects him to. At least you'll still have gotten all that attention he brought.

Or, miracle of miracles, he does make it, and you get a good season or two out of him, and a great story.

3. CUZ, SERIOUSLY, WHY THE HELL NOT?: I've got nothing better to do. Neither do you. Bring us Tebow, just to give us something new to talk about and serve as a distraction from another losing season.