Let's Dive In On This Chris Sale, Dodgers Trade Rumor 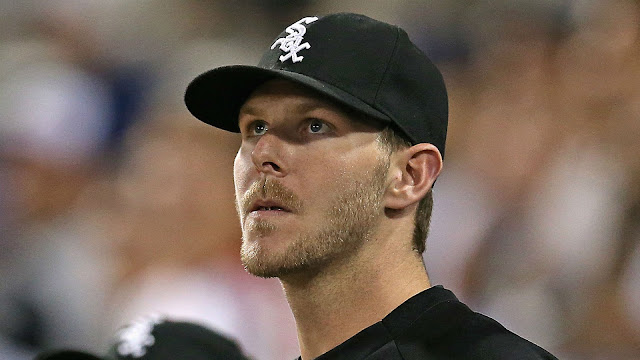 I'm dying here. The offseason isn't even two weeks old yet, and I'm in dire need of something to happen.

We have no idea what the White Sox are going to do this winter, and I just need to know. Rebuild or go for it, I can live with either, I just have to know. Ten minutes ago. Seriously, it's driving me insane.

So I'm going to do something that I wouldn't normally do here, just to help me deal with this White Sox anxiety. I'm going to dive in on a trade rumor.

It comes courtesy of Dave Williams of Barstool Sports, and it's a juicy one!

Rumor on the hot stove is the #Dodgers and #WhiteSox are discussing Sale & Frazier in a package deal to LA for a big prospect return
— whitesoxdave (@barstoolWSD) November 15, 2016


Now, this is the kind of rumor you might see on the internet over the winter and just dismiss, but Dave nailed a few things last season, including the James Shields trade, so I don't doubt what he's hearing. He's proven to be a reliable source on this stuff.

Plus this is just a fun trade idea to chew on. The idea of the Dodgers being interested in Chris Sale certainly isn't a new one, but throwing Todd Frazier in the deal opens up an entirely new dynamic.

Frazier makes a lot of sense too, though.

The Dodgers third baseman last season was Justin Turner, and he's a free agent this winter. He's the most attractive free agent at his position by about 50 miles, too. So he's going to command a pretty penny. Well, if the Dodgers trade for Frazier, they can let Turner walk in free agency, and then possibly collect on two compensation picks (one from Turner and one from Kenley Jansen) in the process. Then, when Todd Frazier's a free agent next winter, the Dodgers could get a comp pick from his departure as well.

In other words, the Dodgers would be adding incredible talent at bargain rates, while also setting themselves up for future draft picks. If that doesn't sound like an Andrew Friedman type of approach to running a baseball team, what does?

But what would the return look like for the White Sox in this deal?

In my rebuilding project, I traded Chris Sale to the Dodgers without Frazier, and I got Cody Bellinger, Julio Urias, Austin Barnes and another undetermined prospect back for him. I think that's a good return, and honestly, it might be a bit light. Throw Frazier in and it's definitely light.

I think all three of those named players could certainly be involved, as well as a few others.

One other player I wouldn't be surprised to see involved in the deal? Joc Pederson.

Rick Hahn has mentioned that the team needs to focus on finding more young, controlled talent. In previous Sale trade rumors with Boston involved, we've heard that the White Sox have asked for Jackie Bradley Jr. as part of the return, and there have been a bunch of other indicators that the Sox are looking for Major League level talent, not just prospects.

I don't know how willingly the Dodgers would include Pederson in any deal, but I definitely think the Sox would ask for him. He'll turn 25 in April, isn't a free agent until after the 2021 season, and through two full seasons he's posted a career OPS+ of 118. He struggles to hit lefties, but he fucking mashes against righties (a career OPS of .918 against them), and the Sox play in a division full of right-handed starters.

Pederson's also posted those numbers while playing most of his games in pitcher-friendly environments like Dodger Stadium, PetCo Park and AT&T Park.

He's also a plus defender in centerfield, so there's a lot to like about him, but again, I don't know how willing the Dodgers will be to part with him for all the same reasons.

I honestly think it'd be more likely that the Sox would ask for Pederson and end up getting Yasiel Puig. Pederson's the better player, but Puig would likely be more of a throw-in, and allow the Sox to ask for more prospects.

Would the Dodgers be willing to include their other top pitching prospect, Jose DeLeon, or top outfield prospect Alex Verdugo? I have to imagine so, because you aren't broaching the subject of getting both Chris Sale and Todd Frazier without knowing you'll have to give up quite a bit to get them.

So, yeah, this is a fun trade to dream on for a while. Hopefully it can get me through the next 24 hours or so.
Chris Sale Joc Pederson Todd Frazier Yasiel Puig