What You Need To Know About The Adam Eaton Trade 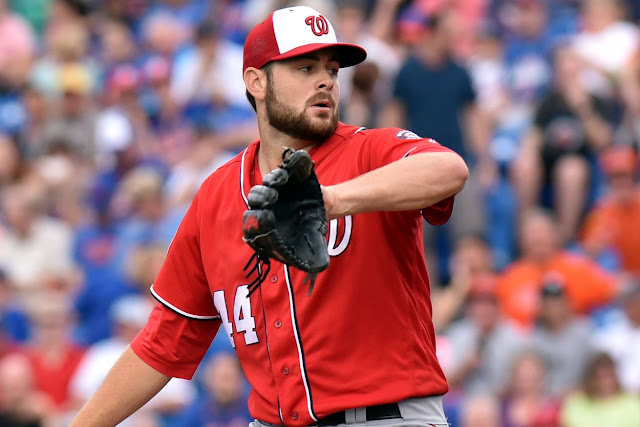 Rick Hahn done did it again. Hahn and the White Sox continued their war on the sanctity of Adam LaRoche's friends and family, sending Adam Eaton out the door on Wednesday, a day after sending Chris Sale to the Boston Red Sox.

If there was anybody out there thinking that the Sox were going to stop at trading Sale, well, the message is clearer than ever before now. This is a complete teardown. The White Sox are starting over.

It's terrifying and exciting all at the same time, so let's go over everything you need to know about this latest trade.

WHAT ARE WE GETTING?

Well, in exchange for one Adam Eaton, the White Sox are getting three right-handed pitchers. Those pitchers are Lucas Giolito, Reynaldo Lopez and Dane Dunning. If those names are familiar to you it's because you heard them come up in the recent Chris Sale trade talks with Washington.

In fact, all three were rumored to be part of Washington's offer for Sale, minus outfielder Victor Robles. So it appears the difference in value between Chris Sale and Adam Eaton was Victor Robles.

WHAT CAN YOU TELL US ABOUT OUR NEW PITCHERS?

Quite a bit, actually. We'll start with Giolito. According to MLB Pipeline's rankings, Giolito was the No. 3 prospect in baseball last season. Now, those of you who have been paying attention will remember that Yoan Moncada, whom we received from Boston for Sale, is the No. 1 prospect in the same rankings.

Yes, that's right, the White Sox have two of the top three prospects in baseball right now according to MLB Pipeline, and both are ranked highly across every site that is in the business of ranking prospects.

This is exciting stuff.

As for Giolito the pitcher and not the ranking, he's a power pitcher and somebody you could see in Chicago as soon as next spring. He was the 16th pick of the 2012 draft, but was rated higher than that. The reason he fell was because he needed Tommy John surgery during his senior year of high school, and while that's a concern, he hasn't provided any reason to worry during his five years in the minors.

Giolito's fastball sits mid to upper 90s, and he has a 12-to-6 curveball that is quite a massive hammer. Remember Gavin Floyd's curveball? It's kind of like that, but harder, and maybe even a bit sharper of a break. His changeup projects to be above average as well, which he'll need to be an effective starter, but a lot of scouts believe it can continue getting better, giving him three plus pitches to work with.

As for his command, like all young pitchers it's something that flares up as a problem from time to time, but if he learns to harness his stuff and stays healthy, Lucas Giolito is going to be a damn monster.

Reynaldo Lopez is ranked as the No. 38 prospect, and he throws even harder than Giolito, though he's not as polished. He was a slow developer at first after the Nats signed him out of the Dominican Republic, but he's flown through the system the last two seasons. Last year Reynaldo began the season in Double-A, and he was in Washington pitching against the Dodgers in July. He made six starts with the Nats and was mostly used out of the bullpen in September. He walked too many guys during his short stint in the Majors, but again, a lot of young pitchers are going to struggle with that, and Lopez is still only 22 years old.

Part of those command troubles have been put on Lopez's delivery, as it can get a bit unwieldy at times. This is another one of those things that can be fixed with proper coaching and attention to detail.

Finally we have Dane Dunning, whom the Nationals drafted in the first round of last summer's draft. He's a pitcher the Sox liked when they scouted him, and though they drafted Zach Collins with their first pick, there was some hope that Dunning would fall to them in the second round. He didn't.

He wasn't used as a starter very often while at Florida, but it wasn't due to his ability, it was because Florida had such a surplus of starters that they chose to use Dunning as a reliever. Scouts do believe he can start, even if he's doesn't project to be a top-end starter in the bigs.

Scouting reports say his fastball sits 92 to 93 with good movement, and occasionally gets up to 95. His changeup can be above average, but right now his slider needs quite a bit of work. Still, scouts think it's something that can be developed into a usable pitch.

THERE SEEMS TO BE A FOCUS ON POWER ARMS IN THIS REBUILD.

Yes, between these three and getting Michael Kopech and Victor Diaz in the Sale trade, the Sox have added five righties who bring a lot of heat to the system. I don't think it's a mandate, however, as much as it's "get the best prospects you can from the teams that are interested" kind of approach, which is the right way to go about it.

SO YOU LIKE THIS TRADE FOR THE WHITE SOX?

Very much so. When the news first broke that the Sox and Nats were getting close to a deal I had been hoping that Victor Robles would be included, and when word leaked he wouldn't be involved I was pretty disappointed.

And then the actual package was announced.

I really like Robles, but two top 40 prospects and a 2016 first round pick for Adam Eaton is really good value.

The thing about these trades and rebuilds is you don't know how any of it will work out in the long run. A lot of these guys could all turn out to be busts, but as of right now, there is no way to describe the job Rick Hahn is doing other than saying he's fucking killing it.

In the span of 48 hours he's taken one of the weakest farm systems in baseball and put together a top five system. Obviously it's come at a price, because it's never easy to part with players like Chris Sale and Adam Eaton, but if you're going to rebuild, this is a fantastic start.

And it's not over.

SO WHO DO YOU THINK IS NEXT?

I wouldn't be shocked if we see smaller deals involving Todd Frazier, David Robertson, or maybe even Melky Cabrera, but I think the next blockbuster is obviously Jose Quintana.

And, yes, I think that happens this offseason. Maybe not this week at the winter meetings, but at some point I firmly believe Quintana will be shipped out for another huge return.

WHEN DO YOU THINK THE PITCHERS WE GOT FOR EATON WILL BE IN CHICAGO?

I think there's a very good chance that Giolito is in your rotation next season. The only question is whether or not he'll break camp with the team, or if the Sox will delay his promotion to manipulate service time and gain an extra year of control.

I'd say Lopez has a chance to be in the rotation in 2017 as well, though I lean toward him beginning the season in the minors to work on some things before having him in Chicago.

As for Dunning, I'd say 2018 at the earliest, with 2019 being a more realistic target. Whether it's as a starter or reliever, we'll have to wait and see.
Adam Eaton Chris Sale Dane Dunning David Robertson Jose Quintana Lucas Giolito Melky Cabrera Michael Kopech Reynaldo Lopez Todd Frazier Victor Diaz Yoan Moncada