What You Need To Know About The Derek Holland Signing 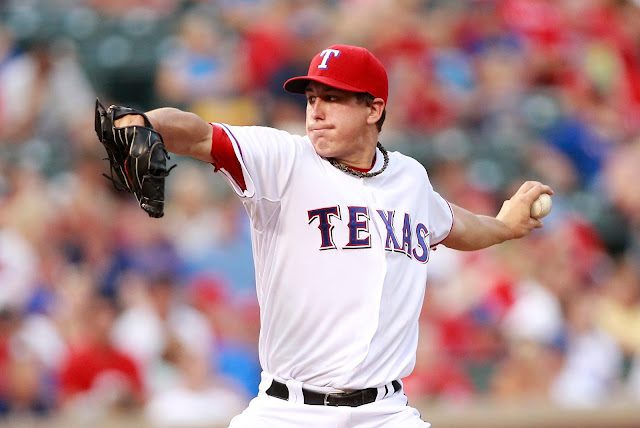 Oh hell yeah the White Sox have made their first blockbuster free agent signing of the winter. The big-time free agent deal that is going to accelerate this rebuild, and propel the Sox right back into the division hunt in 2017.

Anytime you can replace Chris Sale with Derek Holland, you are one step closer to that world title, my friends.

Okay, seriously, this isn't an exciting signing, but it's not supposed to be. This is just the boring kind of signing that you're supposed to make during a rebuild, as you still need people to fill out those 25 roster spots while your prospects continue to bake in the oven.

So what do you need to know about the Holland signing? Let's break it down.

DEREK HOLLAND IS STILL AROUND?

Yes! He is! I understand your confusion because he hasn't pitched all that much recently. Holland kind of broke out in 2011 when he went 16-5 and played a key role in the Rangers winning the American League that season. The 2012 season was a bit rougher as his ERA jumped from 3.95 to 4.67, but then 2013 came along and Holland posted a 3.42 ERA with a 3.44 FIP while posting the best walk rate of his career and eight strikeouts per nine.

But then the injuries came.

Holland missed the first five months of 2014 with torn cartilage in his left knee. He then strained a muscle in his throwing shoulder in his first start of 2015, and missed nearly five months again. Last year he dealt with more shoulder problems, but he did make 20 starts, his most since 2013.

Also, as you'd expect with a guy dealing with shoulder injuries, his velocity has dropped. What was once a sinker (Holland has thrown a sinking fastball since 2012) that averaged 93.6 MPH in 2013 was a 91.7 MPH sinker last season.

THIS ALL SOUNDS SOMEWHAT FAMILIAR.

Well, for a few reasons. First of all, like I said at the jump, this is a rebuild. You aren't making free agent signings for the same reasons in a rebuild as you would if you were actually trying to win.

The reasons you give Holland $6 million for 2017 is because, for a starting pitcher, that's really cheap. Plus, at only one year, there's no long-term commitment, so you're just looking at a few different things to happen.

The ideal scenario is that Don Cooper and Herm Schneider work their magic and keep Holland healthy -- and their reputation with pitchers almost assuredly played a role in Holland choosing Chicago -- and he not only pitches for you, but pitches well. If that happens Holland becomes a possible trade chip at the deadline. Not one you get something great for, but someone you get something for, and in a rebuild, you want to stockpile as many young prospects as you can.

The more you have, the greater the odds some of them pan out.

Also, Holland provides you with somebody who can begin the year in the rotation, allowing you to keep Carson Fulmer, Lucas Giolito and Reynaldo Lopez in the minors a little longer. You'd rather have them work out any possible issues there than in Chicago.

Plus, if one of your young pitchers suddenly starts performing so well that he forces his way to Chicago, it's not as if Holland is some kind of road block. Since he only costs $6 million and you're already trimmed so much payroll -- and will likely trim even more -- you just cut your losses and designate him for assignment if you must.

Honestly, the worst thing that happens here is that Holland gets hurt again, but again, he's only $6 million. You can live with it.

If he stays healthy but doesn't pitch well enough to be traded then he just spends a season in your rotation and then you're done with him. Hopefully he helped you lose a few extra games and improve your draft position along the way.

Plus, he's a veteran. There's a good chance that Jose Quintana will be traded as well, so it's nice to have veterans like Miguel Gonzalez, James Shields and Holland around for the younger pitchers. Particularly three starters who have had such different career paths.

There's a lot that can be learned from the three of them.

HE'S NOT GOING TO DO THE HARRY CARAY IMPRESSION IS HE?