White Sox Tender Avisail Garcia And Brett Lawrie: What Does It All Mean? 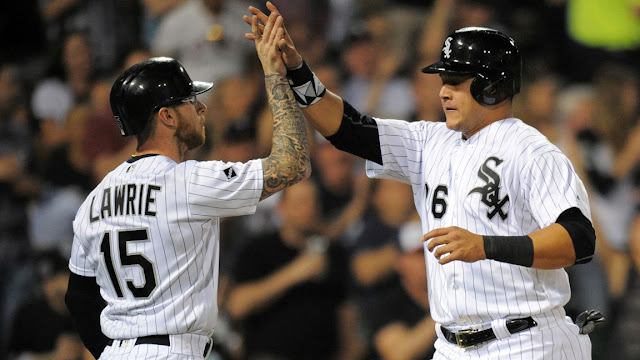 Friday was the deadline for teams to tender players eligible for arbitration, and there were two major decisions looming for the White Sox.

Would they tender Avisail Garcia and Brett Lawrie, or let them go.

I know most White Sox fans wanted them to let Garcia go, and due to some cryptic tweets from Lawrie last month, most assumed he would be let go.

So of course the Sox tendered both, bring Garcia back for $3 million and Lawrie for $3.5 million. So what does it all mean? Besides the fact I've been chugging whiskey to cope with the idea of having to watch Avisail for another season I mean.

Let's figure it out together.

DOES THIS MEAN THE WHITE SOX ARE REBUILDING OR GOING FOR IT?

I don't know for sure, honestly. Rick Hahn said we'd know the direction based on the team's first major move, but I don't think either of these qualify as major moves. The fact is if they're rebuilding -- and everybody seems to think that's the direction they're going -- then keeping Avisail and Brett makes sense. As I wrote about in my rebuilding plan, Garcia isn't as much of a detriment to your roster when you aren't trying to win games.

The problem here is that the Sox went for it last year, and did so while bringing Garcia back even though it had become painfully clear he wasn't very good, and by trading for Lawrie to help improve the infield. So it's not impossible they still plan to go for it and actually think these two are key parts of a winning team.

You just don't know with this organization.

SO ARE THEY BOTH GOING TO BE STARTERS NEXT SEASON?

Well, it's important to point out here that just because the White Sox tendered them, that doesn't mean they'll both be here come spring time. The Sox can essentially buy out of both of these contracts for a fraction of the price before spring training begins if they choose to do so.

You may remember this is exactly what they did with Dayan Viciedo last year. He was tendered, and then released a month later. Then he headed across the Pacific Ocean and started mashing dingers. I had been hoping the same fate awaited Avisail, and it still might!

Now, if they do return next season, it's too early to tell what role they'll each play. I believe you're bringing Lawrie back as a starter, but there is some question as to where he'll start.

If the team does go into a rebuild, it's possible Todd Frazier is traded over the winter, and if that happens, that would allow the Sox to move Lawrie over to third and maybe play Saladino or somebody else at second. Of course, they could just put Saladino at third and leave Lawrie at second.

Either way, I don't think Lawrie is being kept with the plan of using him as a utility infielder.

Avisail is harder to figure out. Maybe you want him starting every day in a rebuild, but I can't help but believe you'd be better off going with players that may have actual futures instead. Whether that's Jason Coats or Rymer Liriano, whom the Sox picked up off waivers from Milwaukee in late October.

The terrifying thought here is that we begin the 2017 season with Avisail Garcia as your starting designated hitter.

COULD THEY BE TRADED?

I would never say never, but it's hard to imagine either of them are traded. Maybe somebody out there would be enticed by Avisail's tools, but I doubt it. The word is pretty much out on him. As for Lawrie, there's definitely talent and ability there, but he just has such a hard time staying healthy. He's been a full-time MLB player for five seasons now and he's only played in 125 games or more in two seasons. Last year with the Sox he played 94.

So neither will be traded this winter, but if both actually play well to start the season, the Sox -- if they're rebuilding -- could always try to flip them for something at the deadline. The odds of that happening aren't great, however.

WHEN ARE WE GOING TO GET TO THE FIREWORKS FACTORY?