Should The White Sox Go After Matt Wieters? 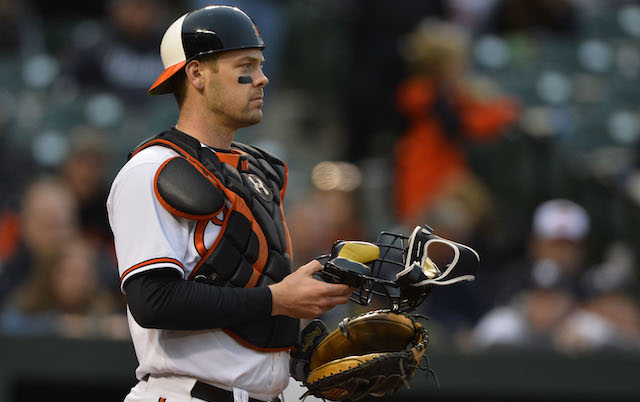 I'm bored. There's been no real White Sox news in two months, save for the occasional trade rumor that is snuffed out by another report minutes later. I need something to think about, and with spring training so close, this offseason just feels incomplete.

So what do I do when I'm bored? I start thinking about possible things that the White Sox can do. When the Twins DFA'd Byung Ho Park I thought about whether or not the White Sox should claim him. I mean, if you're willing to give Avisail Garcia another season, why not kick the tires on Park? He actually has some ceiling left.

They didn't, though. Park cleared waivers and will start the season in the minors with the Twins.

So then I move on to the next idea, and this one floated in front of my eyes through the Twitter timeline this morning. Ken Rosenthal wrote about Matt Wieters, who is a free agent that remains unsigned, and there really hasn't been a lot of talk about him this winter. With spring training rapidly approaching it's somewhat strange that a catcher like Wieters hasn't been able to find a home, particularly considering the general state of catching in the Majors these days.

Wieters isn't the player many envisioned he'd become when he first came to Baltimore, but he's better than a lot of options out there. So why hasn't he signed anywhere? I couldn't honestly say, and I don't care because that's not the question I want answered.

What I want to know is whether or now the White Sox should sign Wieters. So follow along with me as I go on a journey through my own mind trying to figure out if this is an idea that would make sense.

Have you seen the catching situation around these parts? As we head into 2017 there's Zack Collins waiting in the pipeline, but there's still a rather large question mark about whether or not Collins will actually stick behind the plate, plus he's not really ready for primetime yet anyway.

The likely scenario is that the Sox begin the season with Geovany Soto and Omar Narvaez as their two catchers. It's a rebuild and all, but that's not exactly the most promising tandem. It's not that there's anything horribly wrong about either of them, but there's nothing special about them either.

Narvaez was a pleasant surprise last season, but at the end of the day he's still a guy that rapidly climbed the ladder in one year -- both because of his performance and the fact that the team's catching depth chart was thinner than the plot of most pornos -- and played in only 34 games for the White Sox. It's hard to rely on 34 games and decide that Narvaez is going to be an acceptable Major Leaguer. It's far more likely that he ends up as a personal catcher for Carlos Rodon than anything else, as the two worked well together to finish the season.

As for Soto, he's available as a minor league free agent for a reason. He was more than acceptable here in 2015, but he's 33 and has played in more than 55 games in a season only once the last four years -- when he played 78 with the White Sox.

Because he's fallen off quite a bit the last few years, and has had problems staying healthy himself.

Still, the drop-off hasn't only taken place at the plate, but behind it as well. Wieters won a Gold Glove in both 2011 and 2012, but as you'd expect as he's aged, and he's dealt with injuries, that defensive prowess has withered a bit over the last four years. His arm behind the plate remains strong, but everything else has taken a step back.

Earlier I mentioned Zack Collins, and while it may not be his time yet, it wouldn't hurt to have Wieters around as a mentor for him, even if they're only together for six weeks in Arizona. The two of them have a lot in common. Both are early first round draft picks, both are catchers, and both are catchers that profile as plus hitters at the position.

Wieters knows what it's like to be Collins, and could be beneficial to have around him. Plus, Wieters could also help Collins behind the plate with his defense, even if his own defense has slipped.

Honestly, this feels more like a move a team that's trying to win would make than a team like the White Sox. In other words, Wieters is the kind of half-measure the White Sox would have made last season had he been available (he was a free agent but he accepted Baltimore's qualifying offer).

I don't think there's a lot of risk involved here. Given how dead the market seems to be for him at the moment, it's not like you'd have to throw some multi-year deal at him to convince him to come to the White Sox. A one-year deal with a team option for a second would probably do it as long as the money's right, and I don't expect the price tag would be ridiculously high at this point.

Best-case scenario, Wieters has a strong first half of the season, and then you can possibly flip him at the trade deadline for a prospect. Worst-case scenario, he continues to decline, but he's not really blocking anybody, so you eat it for a year and then part ways next winter.

His agent is Scott Boras. I don't say that because I have anything against Boras, but because I believe Boras is likely a key reason why Wieters hasn't signed anywhere. Say what you want about him, but Scott always seems to get his players more money than they're actually worth. He's probably trying to do the same for Wieters right now, and that kind of attitude may be why nobody has signed him yet.

Nobody is offering enough to appease Boras.

It's important to remember that while Wieters isn't exactly starving, he hasn't gotten that huge payday he was envisioning four years ago. When he was a free agent last winter he was the first player to ever accept the qualifying offer because, coming off two injury-plagued years, he didn't think he would get a better offer on the open market. So he decided to return to Baltimore for one more season, and enter 2017 with a better chance to get that big contract.

The problem is that while he stayed reasonably healthy, playing in 124 games, he still regressed as a player, so that payday isn't there yet.

There's also the chance that, at this point, rather than accept a lesser deal, Wieters and Boras are just going to wait it out. Should a catcher go down with an injury during the spring, that team may be more willing to open its checkbook for Wieters than anybody seems to be now.

SO SHOULD THEY OR SHOULDN'T THEY?

After mulling it over, I honestly think it couldn't hurt, as long as it comes at the right price. The White Sox have shed plenty of payroll already this winter due to the rebuild, so it's not as if signing Wieters would cripple the team financially. That being said, anything between $7 and $10 million seems more than reasonable to me at this point. The question is whether or not Wieters would accept that after making $15.8 million last year.

Still, as long as the contract demands aren't ridiculous, I think the possible rewards outweigh the risks here. The worst thing is he sucks, and he helps you lose more games. That's not necessarily a bad result. The best case scenario is he becomes a valuable asset to the team, whether it's as a mentor for Collins, or as another trade chip this summer.

So, yeah, they should, but on reasonable terms.
Geovany Soto Matt Wieters Omar Narvaez Zack Collins