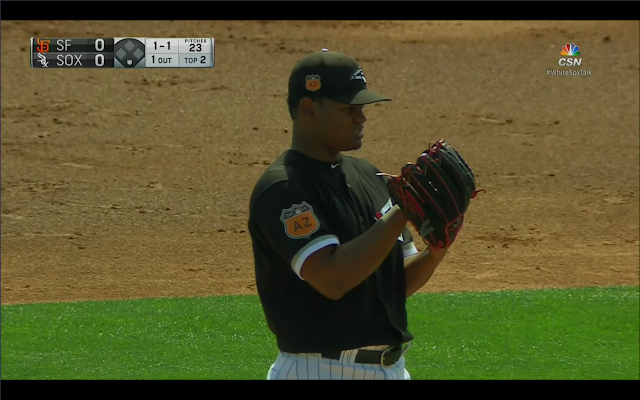 I've been hearing good things about Reynaldo Lopez all spring, but up until this afternoon, I hadn't had a chance to sit down and really watch him. He'd had at least one start earlier this spring in a game that was being streamed on WhiteSox.com, but anybody who has watched a spring training live stream on the team's website knows just how lackluster that viewing experience can be.

Today's game was televised in wonderful HD on my 55-inch television, however, and that gave me a much better chance to sit down and watch Lopez' start against the Giants. Now, I am not a scout, but I'm not a total novice, either.

These are my thoughts on what I saw from Lopez on Monday.

It's foolish to jump to any real conclusions based on one start in spring training, but I have to say I was left feeling pretty good about Reynaldo Lopez after watching him. I wasn't concerned about the results as much as the process itself, but the results matched what I saw. Lopez went six innings, allowed only two hits, didn't walk anybody, and had four strikeouts. He also threw only 76 pitches in what was a very efficient outing.

I know that there are conflicting reports from scouts on what Lopez will be in the long run. The Sox obviously see him as a starter, while others think he'll be better-served as a high-leverage reliever in the Majors. I can't say what he's going to be by the time his career is over, but the pitcher I saw on Monday was a mid-rotation starter with upside. I didn't see enough strikeouts or swings and misses to truly think Lopez has ace potential, but I did see was the potential for a No. 3 starter that a lot of teams would be happy to have.

There was a lot to like on Monday.
Reynaldo Lopez