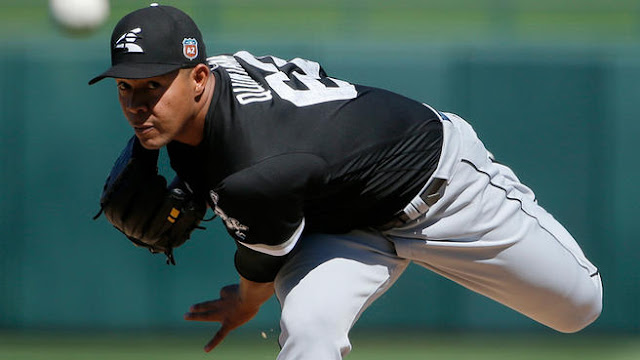 This isn't news to you. It's not news to anybody.

At the same time, it is news.

Both Jim Bowden and Jeff Passan reminded us all of the fact that Jose is still here, and that there are teams out there that would like to trade for him.

A potential #WhiteSox #Astros deal would be centered around a package of both Frances Martes and Kyle Tucker. However, nothing close.
— Jim Bowden (@JimBowden_ESPN) March 22, 2017

Passan went a bit further than a couple of tweets, deciding instead to write an entire column about the fact that Jose Quintana is good, and that he's still here.


Over the last few days, the buzz around camps in Florida and Arizona converged on the same player: Jose Quintana. Scouts ran their information up the chain – Chicago White Sox scouts are everywhere – and the game of telephone ended with general managers across the game wondering: Are they finally going to deal Quintana?

The answer, major league sources familiar with the talks told Yahoo Sports, is the same it’s been since the White Sox committed to rebuild and started the dismantling of their core: Yes … but only for the right price. And even as the White Sox have dispatched more scouts than usual to those back fields, sources said, no deal has materialized.

Passan goes on to mention that teams like the Braves and Pirates are interested in Quintana, adding to Bowden's report that includes the Astros. If you're a White Sox fan, none of this is new information. Hell, the factoid about the Sox wanting a package from Houston that starts with Frances Martes and Kyle Tucker is old news. In fact, we've heard tale that the Astros have already turned down offers from the White Sox that included both of them.

As for the Braves and Pirates, yeah, they aren't new, either. The only team missing is the Yankees.

Again, none of this is really news, but it continues to be news just because Quintana is still here.

When the White Sox went to the Winter Meetings and blew things up by trading both Chris Sale and Adam Eaton to kickstart the rebuild, Quintana was the obvious choice to follow them out the door.

That was a few months ago, and now, with only a few weeks remaining before the start of the actual season with games that count, he's still here. Personally, I've passed the point where I was expecting Quintana to be dealt before the start of the season, and I'm just waiting for the trade deadline. It isn't ideal because having Quintana on the roster makes the White Sox a better team, and in a year when the goal is to lose as many games as possible, it's counter-productive to have him.

But I don't think there's another reasonable choice right now. I just don't see why -- barring an unforeseen injury -- any team that hasn't been willing to pay the price for Quintana this winter will suddenly decide to do so before the season starts.

If Rick Hahn is truly going to maximize the return for Quintana in the same manner that he did Sale and Eaton, it's going to happen during the season. The reason all these White Sox scouts are out watching players isn't because a deal is imminent, or even remotely close. It's so they have the information available when the trade is about to happen in June or July.