A Possible Lifeline For Jacob May 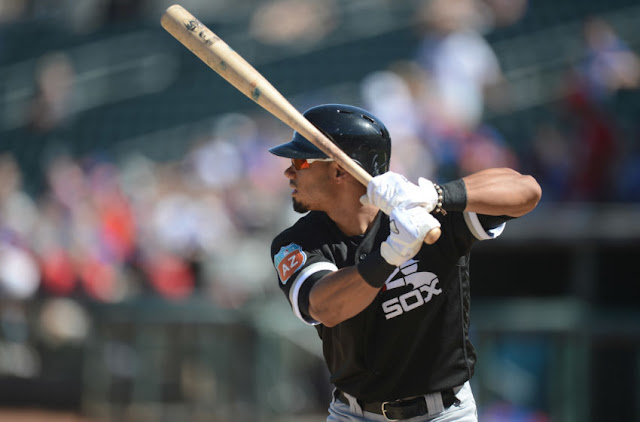 On Friday night Jacob May went 0-for-2 with a walk and a strikeout. By itself, it wasn't a bad night. Hell, compared to what his teammates did, it was actually above average, as May actually managed to reach base. He was one of only four White Sox hitters to do so against Corey Kluber.

The problem is that May has had nothing but 0-fors this season.

When Charlie Tilson went down with an injury during the spring I wanted to see the Sox give May a chance at a spot on the Opening Day roster. Considering we're at the beginning of a rebuild I felt it made sense to see what you have in May, who just turned 25 in January. Plus more May meant less Peter Bourjos, and less Peter Bourjos was fine with me.

Even if he is a better player, Bourjos is Bourjos, and he's always going to be Bourjos.

So when the Sox traded Bourjos to Tampa Bay I was excited because it was a clear indication that they were going to give May every chance they could.

And now that they have, I'm wondering if Jacob May needs to go back down to the minors. Not for the sake of the White Sox -- we're not trying to win games anyway -- but for his own confidence. He's been adequate defensively, but I can't help but believe that going to the plate three times a night and failing miserably isn't doing much for his confidence. It'd be one thing if he were hitting the shit out of the ball and just getting unlucky, but that just isn't the case.

According to Fangraphs, May has a hard-contact percentage of -- are you ready for this? -- 0.00%. That's right. He hasn't hit a ball hard yet. Now, his soft-contact percentage is only 17.6%, so it's not like he's hitting nothing but soft bleeders all over the place. Hell, he might be better off doing that more often, as his speed might allow him to beat out some soft grounders, but I digress.

The point is that May isn't making hard contact and he's striking out a third of the time. He just looks over-matched, and at this point, he's probably better off regaining some confidence at the plate in the minors.

The problem is that you don't exactly have many options to replace him.

Leury Garcia has been okay, but I don't know if he's somebody you want playing centerfield every day. Particularly when your corner outfielders are Melky Cabrera and Avisail Garcia. You can't call up Charlie Tilson, as he's still hurt. In fact, Tilson was just placed on the 60-day disabled list Friday, so who the hell knows when he'll be back.

You almost wonder if they should just take him out back and end his misery.

The only other option on the 40-man roster is Adam Engel, but it's hard to believe he'd be much of an upgrade. He's currently hitting .073/.191/.073 in Charlotte, so it's not like he's earning his way to Chicago at the moment.

There might be a stopgap that isn't on the roster, though.

On Friday the Brewers designated Kirk Nieuwenhuis for assignment. He wasn't off to a much better start than May is, as he was hitting .080/.233/.240 before being designated. Unlike May, Niewenhuis at least has a track record in the Majors. Not a great one, mind you, but a record!

Like May, he strikes out a lot, and he's basically an average to slightly above average centerfielder. Unlike May, he has a much better command of the strike zone, as he's walked in 10.7% of his career plate appearances. That helps balance out the 32.2% career strikeout rate.

But that's not what this has been. He's just over-matched right now. He may have a future in the Majors as a fourth outfielder but I think leaving him up at this point might do him more harm than good. Hawk can talk all about Robin Ventura's horrible slump to start his career, but Robin was a first round pick with a fantastic pedigree.

I don't have the same kind of confidence in May's ability to battle through this.

I'd rather watch Nieuwenhuis be consistently below-average at the plate than feel bad watching May struggle. Plus, if May goes down to the minors and gets things turned around, you can always bring him back. The same can be said of Charlie Tilson if he ever returns from the dead.

You just DFA Nieuwenhuis and move on.

So if I'm Rick Hahn I'm calling Milwaukee to see just what it would take. Not for the sake of the 2017 White Sox, but for Jacob May.
Adam Engel Charlie Tilson Jacob May Kirk Nieuwenhuis Peter Bourjos